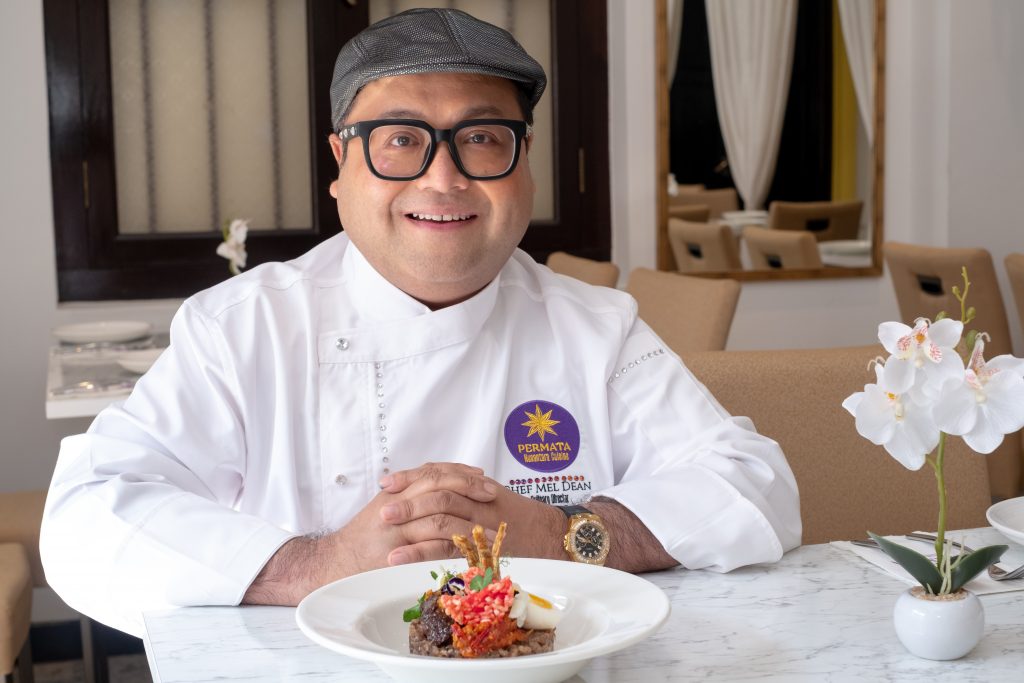 I got a sneak preview of the dishes on November 26. It was a showcase of vibrant diversity and indigenous ethnic flavours, highlighting classic Nusantara dishes presented in a modern way.

Nusantara is a historical Old Javanese term which literally means “outer islands”; in essence referring to the islands surrounding Java (or parts of it).

Permata’s Culinary Director, Chef Mel Dean (above), has come up with a new menu which has an array of Kerabu salads, soups, small plates and mains. 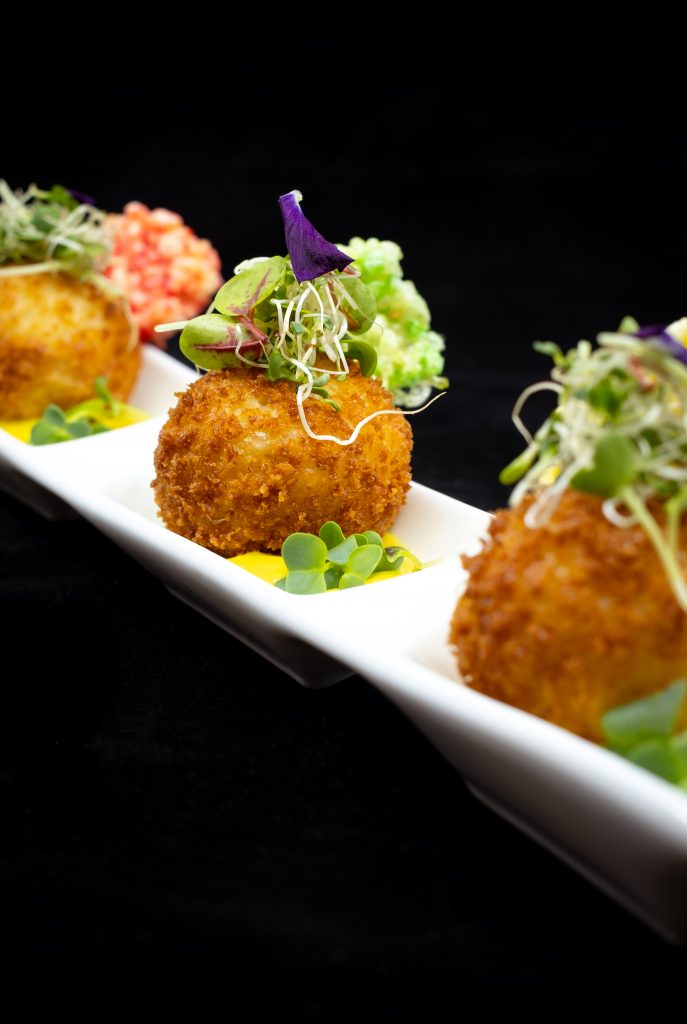 “This dish was inspired by my late grandmother. She would pound sambal bajak with a mortar and pestle, scoop some hot rice mixed with fresh herbs, salted fish and feed me,” said Chef Mel Dean.

It was made with grilled chateaubriand marinated young mango, king salad and ginger flower lime dressing. 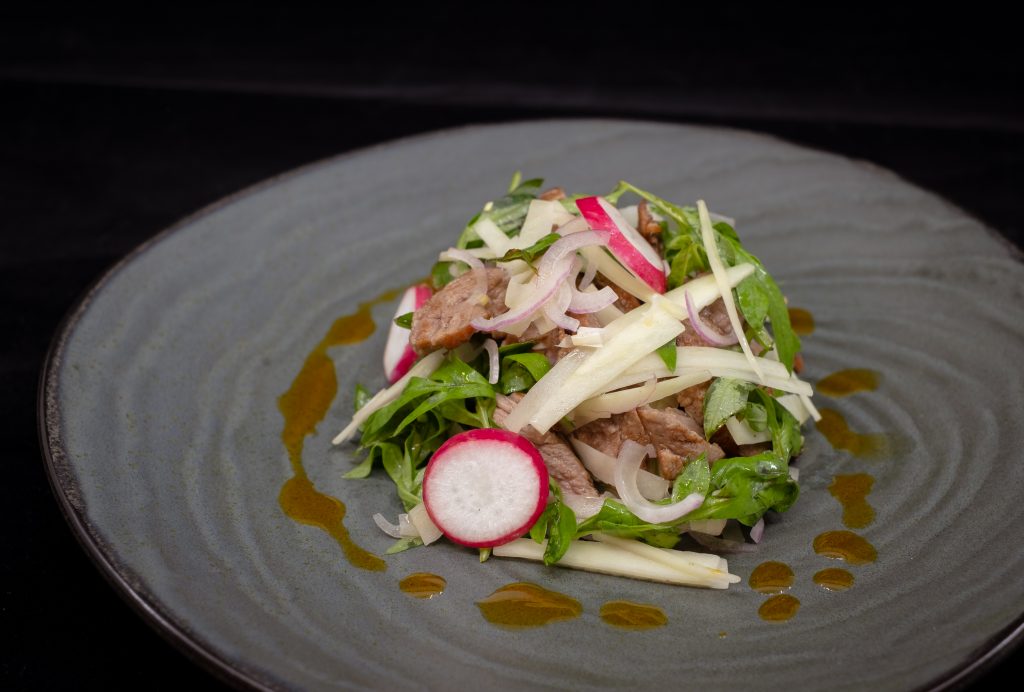 “In the Nusantara culture, Kerabu is a side salad made with vegetables packing a punch with either a spicy or citrus dressing,” said Chef Mel Dean, “Having lived in Johor Bahru for five years, my neighbour’s specialty was her Beef Kerabu which has inspired me.

“At Permata, we have added king salad tossed with ginger flower lime dressing to the beef which is marinated with fresh turmeric, lemongrass, bird’s eye chili and young mango.” 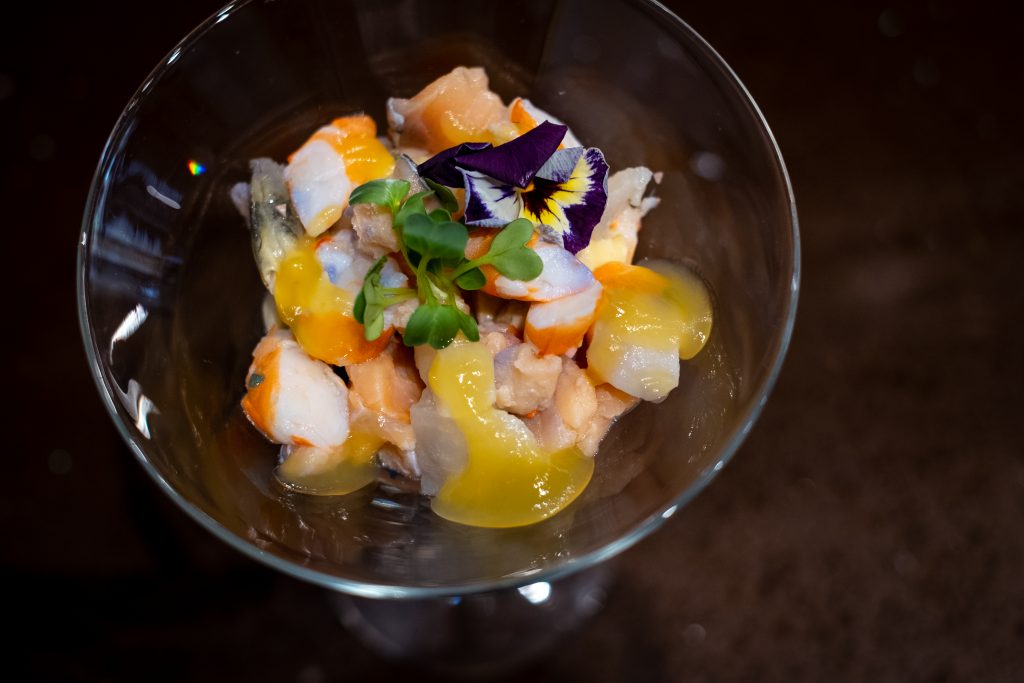 Chef Mel Dean has elevated this dish by adding savoury blue pea gel and orange ginger gel to seafood along with a ginger flower lime dressing.

It also has scallop, black mussel, prawns and salmon.

Permata’s Ceviche is complemented by a hearty bowl of Soto Banjar inspired by street food in South Kalimantan that offers an earthy, comforting preamble to the feast that awaits you. 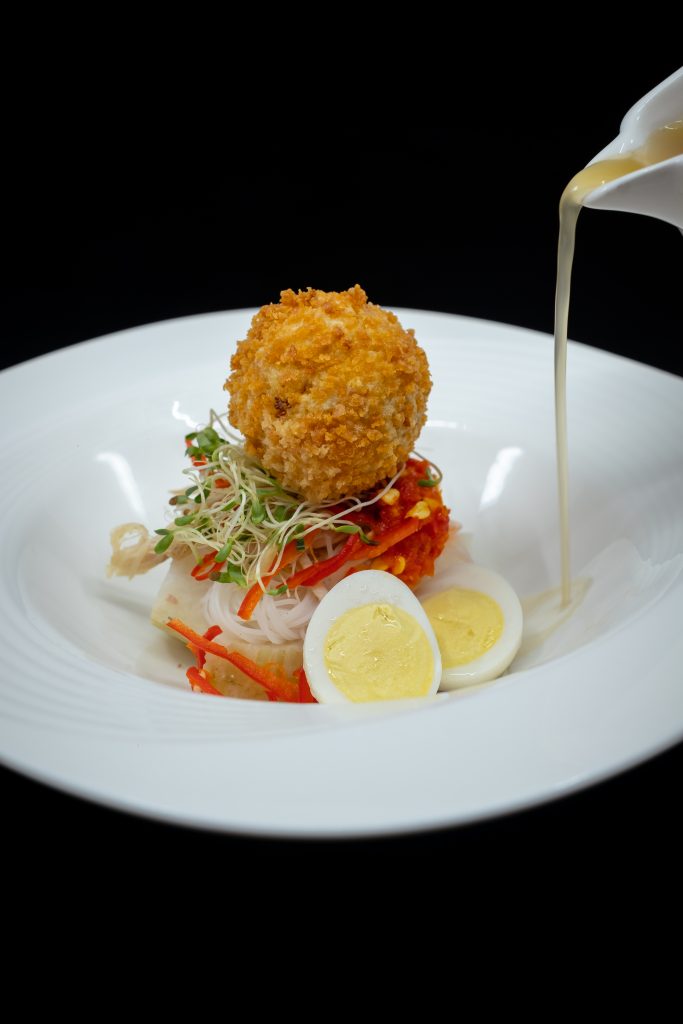 “It is comfort soup at its best,” said chef Mel Dean. “The aroma from Soto Banjar comes from star anise, cinnamon, nutmeg and kaffir leaves. For extra heat, add sambal oelek which is made of blended fresh chili, garlic, vinegar and a dash of lime juice.” 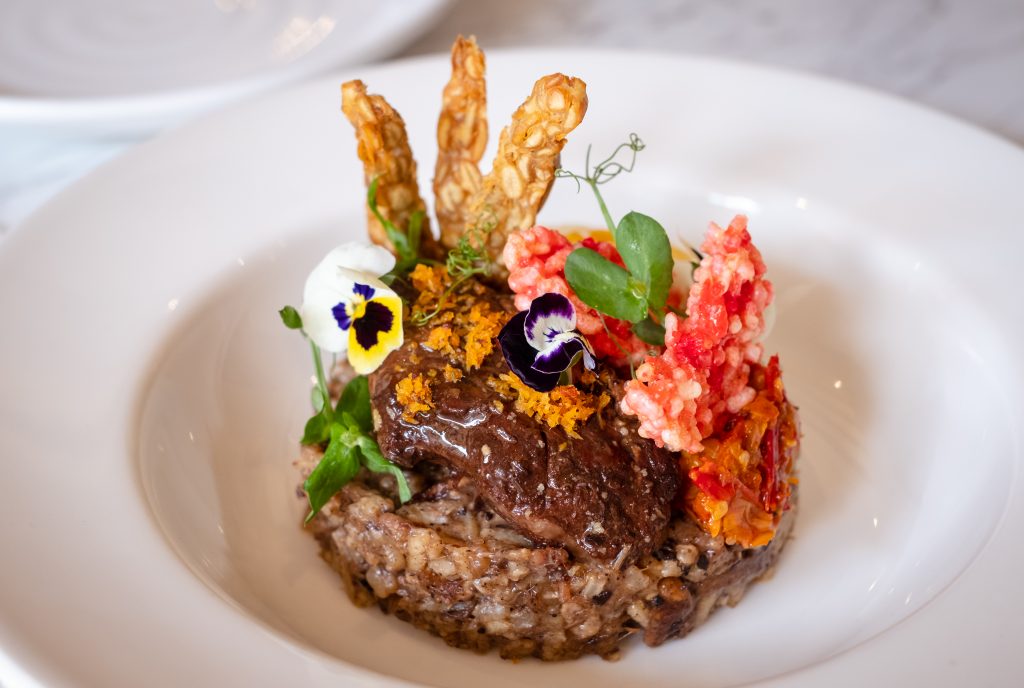 “Rawon, which originates in East Java, is one of the oldest dishes in Indonesia,” explained Chef Mel Dean. “The origin of the dish is believed to be the city of Surabaya, the capital of East Java. At Permata, our Nasi Rawon is a slow-cooked beef stew infused with buah keluak nut made with creamy risotto topped with ramen egg.”

I especially liked the Botok Botok Halibut, which used the familiar Ulam to bring out the distinct flavours of Botok Botok. Chef Mel Dean chose the halibut, a boneless fish that does not compromise on the familiar taste of Botok Botok Ikan. 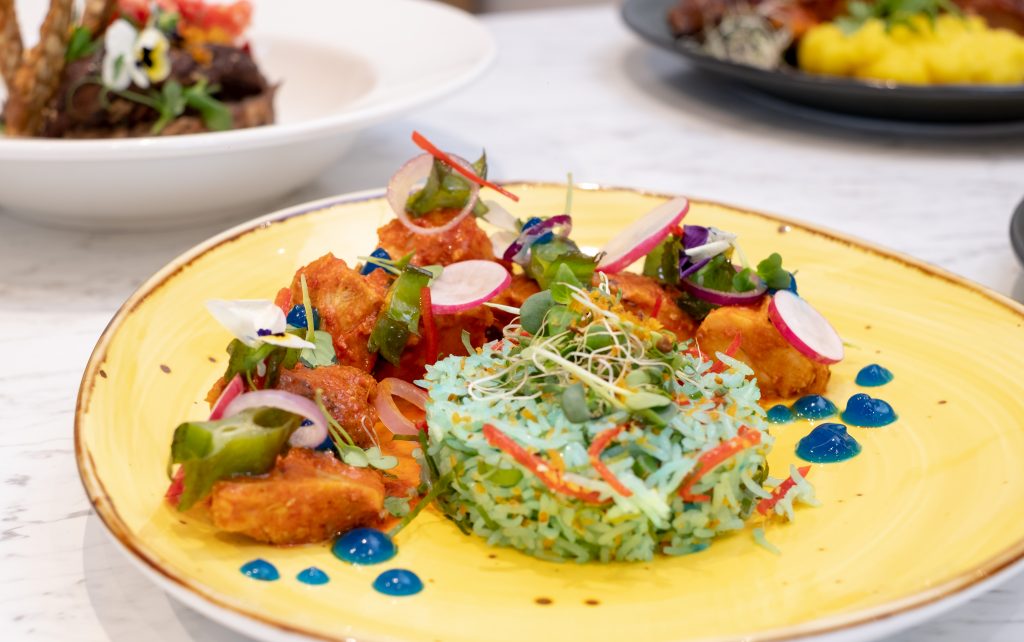 “This classic dish from Makassar, North Sulawesi, is usually braised,” said Chef Mel Dean. “However, we  have not only braised the boneless chicken leg with galangal, lemongrass, coriander, cumin and tamarind juice, but also chargrilled and then basted the gravy to bring out the flavours.” 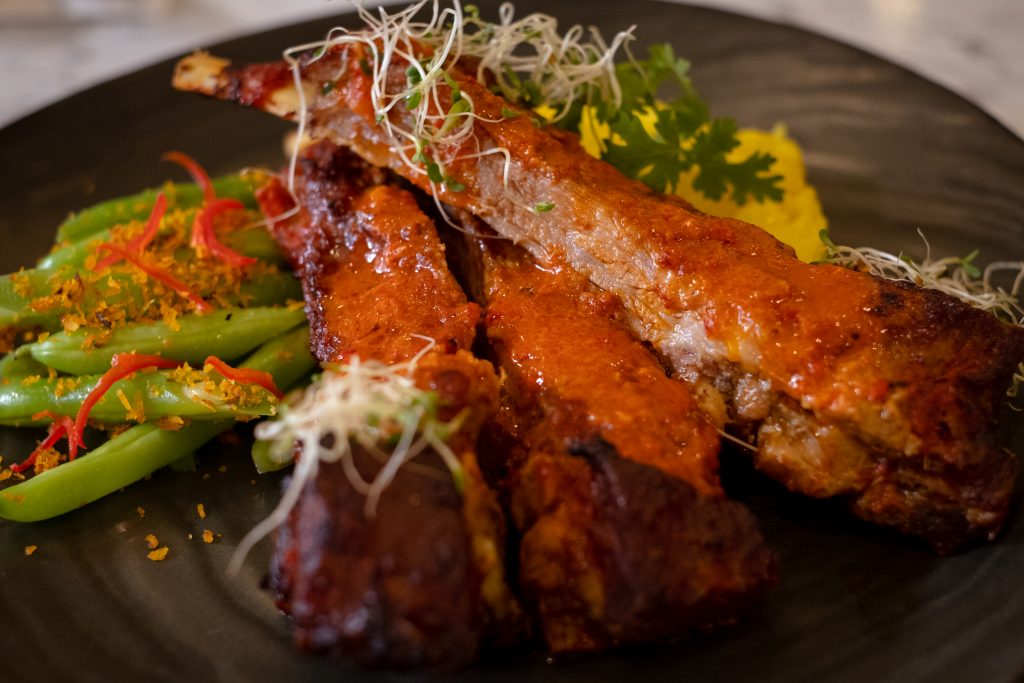 “I used New Zealand Lamb Ribs which were braised with chili, shallot, galangal and lemongrass for four hours and then chargrilled while basting it with Percik gravy for an explosion of flavours.”

For dessert, Cek Mek Molek (a traditional Kelantan kuih) is a must. It is not commonly available in Singapore. 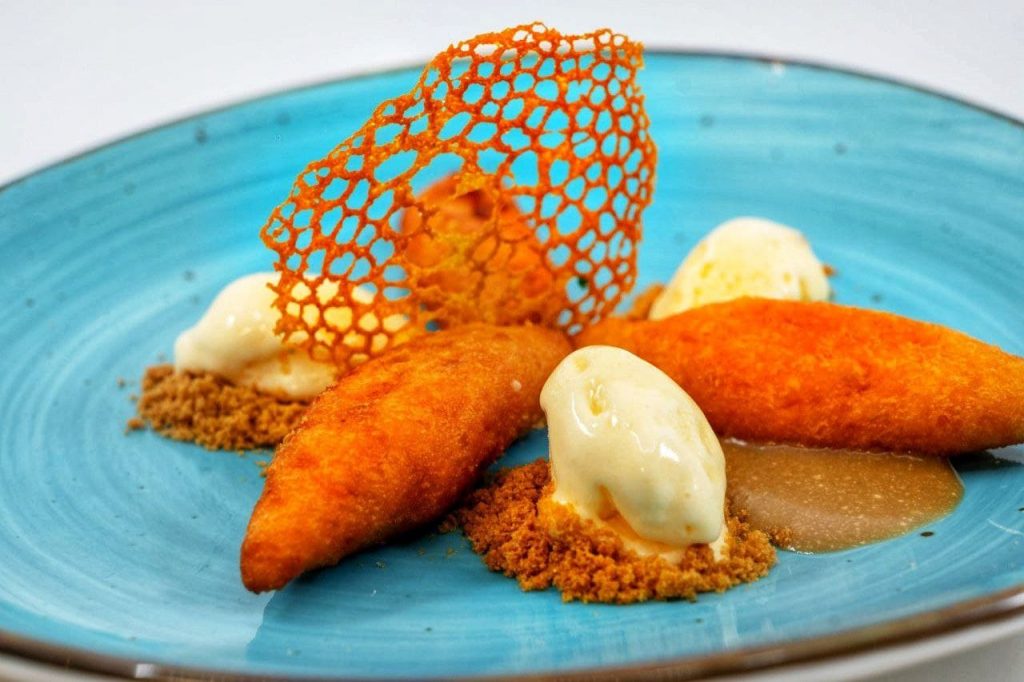 “Every visit to Kelantan or Kuala Lumpur, I have to eat their famous Kuih Cek Mek Molek which is similar to Kuih Keria, sweet potato donuts,” said Chef Mel Dean. “For Permata, I have used less sugar in our sweet potato dough and fried it till it becomes golden brown before dusting it with icing sugar, crushed almond flakes and dipped with espresso caramel and served with vanilla ice cream.”

Prices for Permata’s new dishes range from $10++ to $42++.
Reservations are highly recommended via https://www.gedungkuning.sg/book

Chef Mel Dean
Celebrity Chef Mel Dean has been in Singapore’s culinary scene for the last 29 years. He has catered to many taste palettes including celebrities, ministers and royalty. The former food columnist is also an author and speaker.

Boasting over 10,000 square feet, Gedung Kuning was built in the late 1850s. Its exterior was inspired by Palladian architecture which is a European architectural style that was trendy those days.

The interior is similar to the former Istana Kampong Glam next to it and follows the design of a traditional Malay house.

In 1864, the youngest son of the Sultan of Johor, Tengku Mahmud, named his mansion Gedung Kuning, which means Yellow Mansion, after its yellow walls. Yellow is a royal colour commonly associated with Malay Sultans.