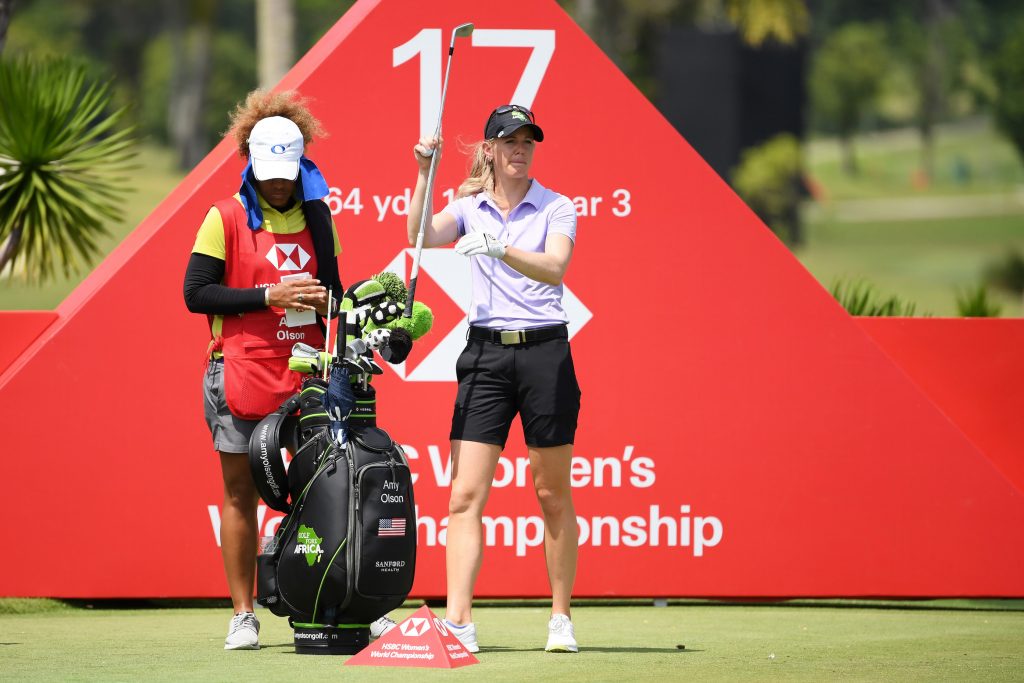 Amy Olson of the United States prepares to play from the 17th tee during the second round of the HSBC Women’s World Championship at Sentosa Golf Club on March 01, 2019 in Singapore. (Photo by Ross Kinnaird/Getty Images)

SINGAPORE, 1 March 2019: American Amy Olson continued her dream debut at the HSBC Women’s World Championship today, carding a three-under 69 to take a two-shot lead over the chasing pack at the halfway stage of ‘Asia’s Major’.

The joint round-one leader played a near flawless round consisting of an eagle on the par-five fifth
hole and two further birdies on the 13th and 16th holes. A bogey on the 14th was her only dropped
shot of the day, putting her at the top of the leader board on seven under.

The 26-year old from North Dakota turned pro in 2013 and is yet to win her first LPGA tournament.
But some strong performances in 2018, including second place at the Evian Championship, saw her make the elite 63-player field for the Singapore tournament for the first time.

A fully qualified accountant, she needed no help in crunching the numbers from her first two rounds.

“The back nine was playing really tough, and I just stayed patient with it. A couple of putts kind of fell at the end, but just overall, kind of a steady day.”

Azahara Munoz shot the low round of the day, 68, to place herself in contention. The Spaniard, runner-up to Paula Creamer in Singapore in 2014, is in good company in second place alongside two-time tournament winner Inbee Park, World No. 1 Ariya Jutanugarn, World No. 3 Minjee Lee and England’s Jodi Ewart Shadoff. 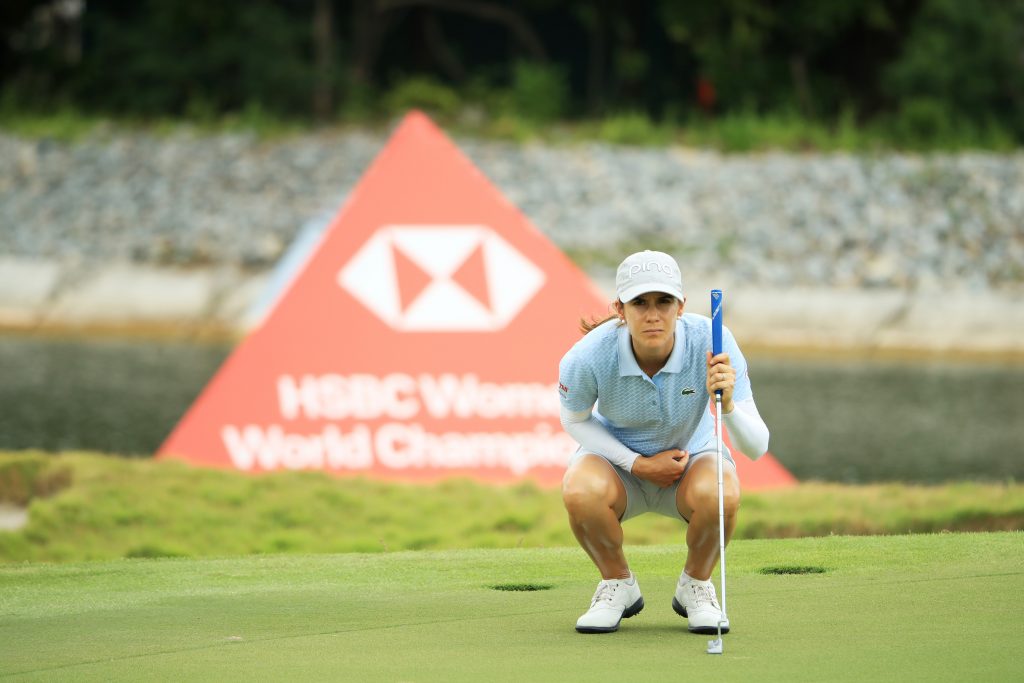 Azahara Munoz of Spain lines up a putt during the second round of the HSBC Women’s World Championship at Sentosa Golf Club on March 01, 2019 in Singapore. (Photo by Andrew Redington/Getty Images)

Comparing her first two rounds, Munoz, whose sole LPGA Tour win came in 2012, said: “It doesn’t take much to go from a really good round to an okay round, so today I hit a couple of them, like really tap-ins and those were easy birdies. That was the difference, really.”

Commenting on the speed of the greens, something that a number of players have struggled with, the 31-year old said: “I love fast greens!”

Meanwhile, Park Inbee, who shot three-under 69 in round two, will be the one to watch over the weekend. A winner on The Serapong course here in 2015 and again in 2017, when the tournament
moved to the New Tanjong course, the seven-time Major winner and reigning Olympic champion knows a thing or two about closing out a tournament. 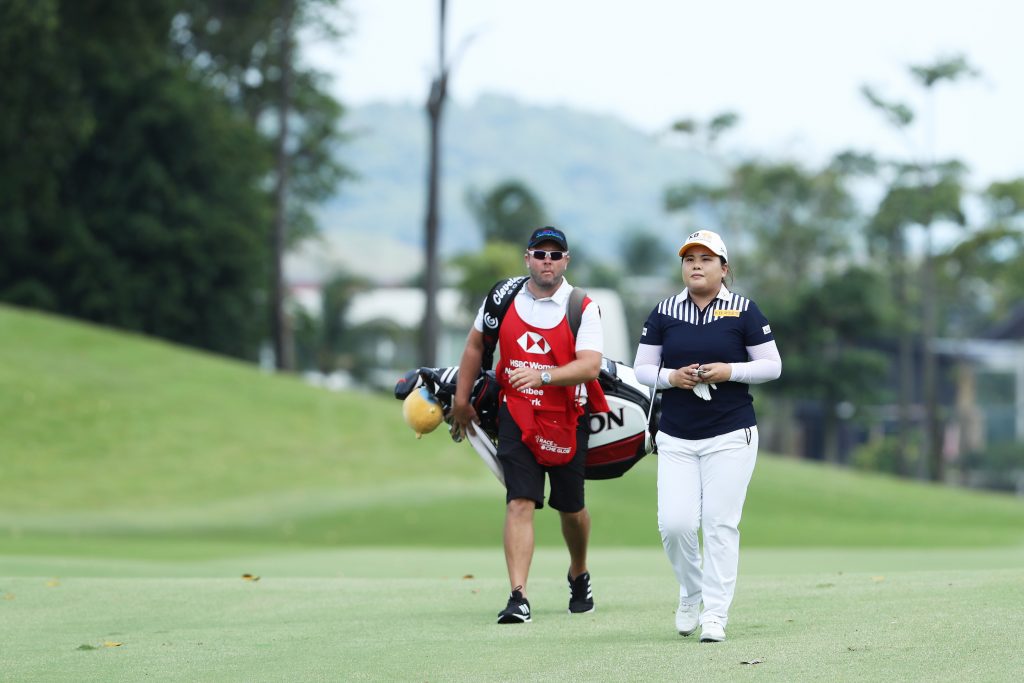 Park Inbee Park of South Korea walks with her caddie on the 18th hole during the second round of the HSBC Women’s World Championship at Sentosa Golf Club on March 01, 2019 in Singapore. (Photo by Lionel Ng/Getty Images)

The popular South Korean will be looking to extend the winning pattern in 2019.

Commenting on her track record at the HSBC Women’s World Championship, Park said: “I feel always quite comfortable playing in Singapore, and it has been very successful for a few years. I just love the atmosphere and I love the place, love the golf course. It really suits my eye, and the windy conditions I really don’t mind so far. Hopefully I keep that going for the next two days.”

The tournament is Park’s first of the year. “You know, my putter is still a little bit rusty, so trying to get the speed and the breaks right; the next couple of days, that will be really helpful,” said the South Korean.

Australia’s Minjee and Ariya of Thailand both carded one under on Friday, while Jodi Ewart Shadoff went two under. One shot further back at four under and in joint-seventh place are the elder of the two Jutanugarn sisters Moriya, World No. 2 Sung Hyun Park of South Korea and Spain’s Carlotta Ciganda. 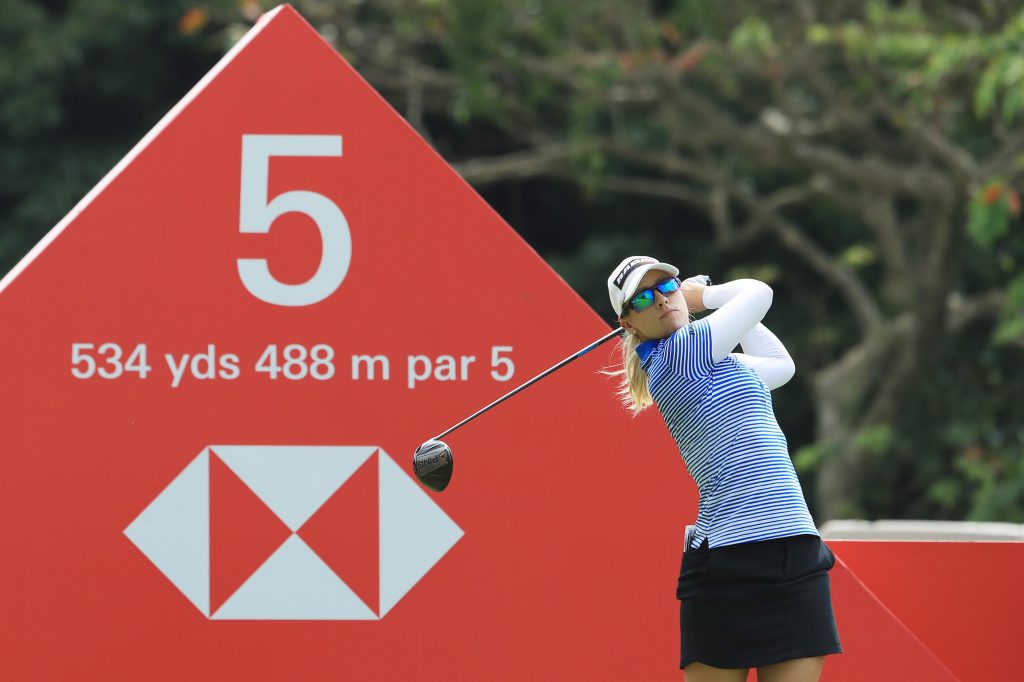 Jodi Ewart Shadoff of England plays her shot from the fifth tee during the second round of the HSBC Women’s World Championship at Sentosa Golf Club on March 01, 2019 in Singapore. (Photo by Andrew Redington/Getty Images)

Another player to make steady progress amid blustery conditions in round two was former World No. 1 Lydia Ko of New Zealand, who shot two under to leave her tied in 13th place.

Singapore’s Amanda Tan endured another difficult day in the challenging conditions at her home club.

The 20-year old shot 12 over to leave her at 23 over heading into the weekend.