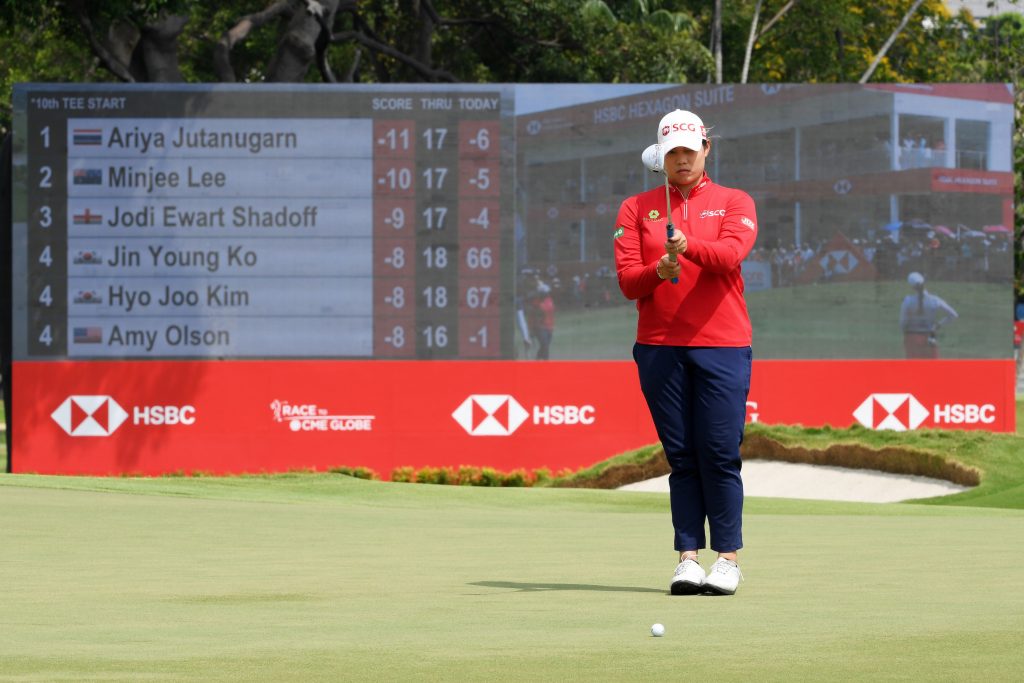 Ariya Jutanugarn of Thailand lines up a putt on the 18th green during the third round of the HSBC Women’s World Championship at Sentosa Golf Club on March 02, 2019 in Singapore. (Photo by Ross Kinnaird/Getty Images)

SINGAPORE, 2 March 2019:World No.1 Ariya Jutanugarn carded the joint low round of this year’s
tournament on Saturday to move back to the top of the leader board as the HSBC Women’s World
Championship enters the final day.

The Thai shot a six-under 66, to leave her on 11 under, one shot ahead of World No.3 Minjee Lee on 10 under. Three birdies either side of the turn with no dropped shots was the difference between her and Lee, the Australian dropping shots on the seventh and 11th holes.

Ariya, who had previously said that she was struggling to read the greens, certainly found her eye on Saturday. Asked about the improvement in her putting, she said: “I’m getting a lot better because in my first two rounds, I felt like I can’t really do it, but today – finally I made some.”

About the prospect of a first win on Asian soil, the 10-time LPGA Tour winner, said: “You know, one of
my dreams, going back five years, is that I really want to win in Asia because I never have.” 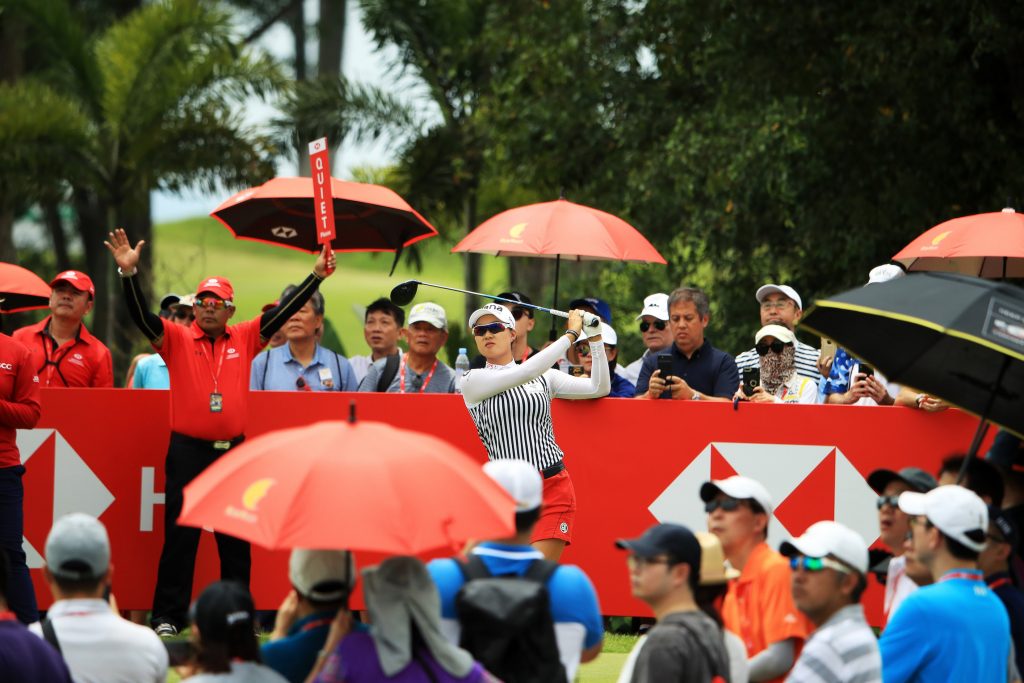 Minjee Lee of Australia plays her shot from the tenth tee during the third round of the HSBC Women’s World Championship at Sentosa Golf Club on March 02, 2019 in Singapore. (Photo by Andrew Redington/Getty Images)

Speaking about her round, Lee said: “I think I made four birdies on the front nine and one bogey, so I
turned three under, which was pretty nice. I made three birdies in a row at some point, and just really
got my round going.”

Looking ahead to round four, Lee, who was runner up in Thailand last week and has four LPGA Tour
wins to her credit, said: “I think I played with Ariya every single round, so it’s probably going to be four
in a row with tomorrow. It’s pretty cool. She’s great to play with. She’s fast and just good all around.”

A shot further back at nine under is England’s Jodi Ewart Shadoff whose consistency on the New Tanjong course has put her into contention to claim Asia’s top prize. Despite 18 top-10 finishes, Ewart
Shadoff is yet to claim a maiden Tour victory. Jodi Ewart Shadoff of England plays her shot from the 18th tee during the third round of the HSBC Women’s World Championship at Sentosa Golf Club on March 02, 2019 in Singapore. (Photo by Andrew Redington/Getty Images)

“I’ve had a couple of really good finishes this year. I experienced it recently, so hopefully I can take that experience into tomorrow. Just stay in the moment and not get ahead of myself. I’m striking the ball well and hitting a lot of fairways. As long as I stick to the task at hand, I’ll hopefully do well,” said Ewart Shadoff.

Tied in fourth place at eight under are Koreans Jin Young Ko, who also shot six under for the round, and Hyo Joo Kim. The pair sit alongside round two leader Amy Olson from the US and Spain’s Azahara
Munoz.

Former World No.1s Park Inbee and Lydia Ko are a shot further back in 10th place. In the early stages
of her round, Park did look to be making her move for a third title in Singapore, with three birdies on
the front nine, but was unable to maintain the pace, dropping three shots after the turn to post an even par score for the day.

Three other players to impress on ‘moving day’ were Canadian Brooke Henderson, who shot five under, China’s Feng Shanshan and Brittany Altomare from the US (both four under).

The trio are tied in 14th place alongside Americans Nelly Korda and Cristie Kerr.

The final round of the HSBC Women’s World Championship tees off at 8.15am on Sunday, 3 March at
Sentosa Golf Club as the battle to be crowned champion reaches its climax.