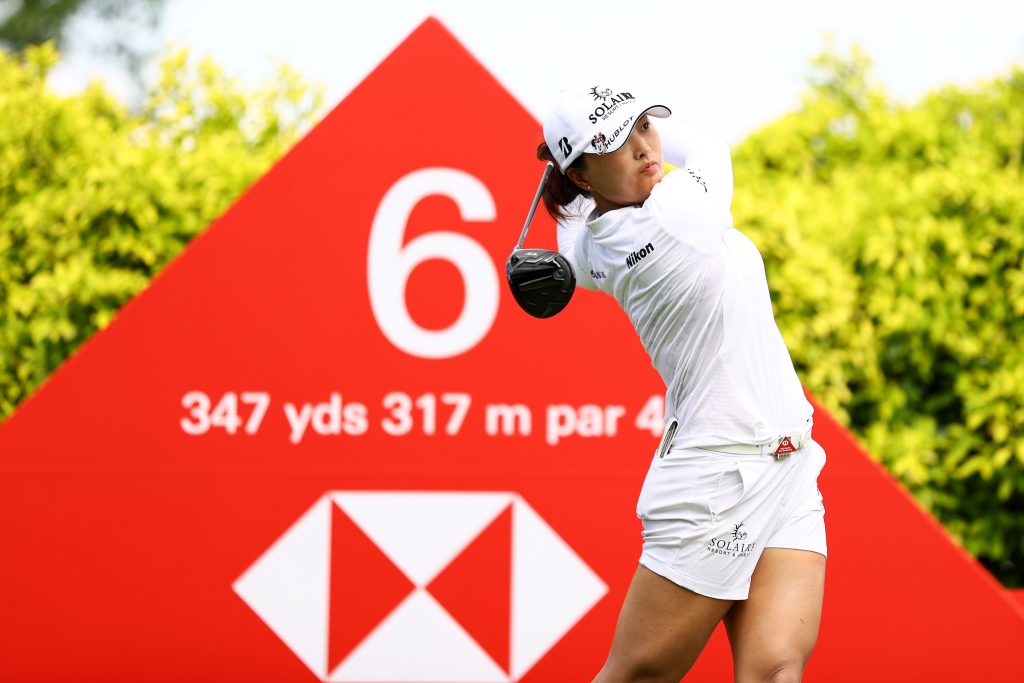 Jin Young Ko of South Korea plays her shot from the sixth tee during the second round of the HSBC Women’s World Championship at Sentosa Golf Club on March 4, 2022 in Singapore. (Photo by Yong Teck Lim/Getty Images)

World No.1 Jin Young Ko shot 5-under par 67 in the second round of the HSBC Women’s World Championship to join Amy Yang at the top of the leaderboard at the halfway stage of the tournament.

The two South Koreans both started the round at 3-under par before making their move on a day that saw frequent changes at the top of the leaderboard at Sentosa Golf Club.

Speaking about her round, Ko said: “Well, it was a great round today. I tried to make more birdies and make more opportunities for birdie chances today. So, I’m happy right now. I just wanted to get some more birdies than yesterday. I really focused on my swing before the second shot or before the green, into the green. So, I made a lot of putts today.”

Ever the perfectionist, Ko added that despite going top, she still wasn’t satisfied with her overall form: “My swing feel was a little different from the front nine to back nine. I felt more comfortable on the back nine, so I just want to find out what happened on the front nine – is it mental or is it warm-up or needing more stretching before the tee off? So, I’ll go to the range right now.”

At 32, Yang is something of a veteran by current LPGA standards. Making her Tour debut in 2008, the last of her four wins came in Thailand in 2019. She will see this as the perfect opportunity to get back to winning ways on track she knows well.

Yang said: “I was hitting the ball very solid today and also putted well. But I was more aware of how to prepare for each shot than the outcome. I think I managed well today. Overall, I love the country and the golf course. I enjoy coming here, and I think that kind of mindset just helps me enjoy each day more.”

Looking ahead to tomorrow, she added: “Just keep it simple and nothing really you can do, except really prepare well for the tournament. So, that’s it.”

Atthaya Thitikul set the early pace in Round 2 with four birdies on the front nine holes but par after the turn, including two bogeys, slowed her progress. Playing on the same course that she won on as an amateur in 2018, the 19-year-old Thai heads into Saturday one shot off the lead.

Thitikul said: “On the front nine, I played really good, really solid golf, and then kept rolling the putts. But on the back nine I just had back luck on the par-5. And then I struggled to commit. But overall, it was good. My game is fine. It’s not my A game but I’m just trying to give myself a lot of chances and then commit to it and have a good roll-in for the putt. It will be good!”

Tied in third place alongside Thitikul is Canada’s Brooke Henderson and Megan Khang of the U.S. All three carded scores of 68.

Henderson said: “It was a good day. I felt like I hit it really well and I gave myself some good birdie looks. It was nice to cash in I guess on five birdies, and unfortunately one bogey. But I’m happy with how I’m playing the last two days. It was a lot of fun playing with Su and Jin Young today. They both played really well, so that always makes it more fun too. And just excited to play the weekend.”

Commenting on the family support she receives around the world, Henderson added: “Having my sister on the bag and traveling with her around the world, it’s so cool. We have a lot of fun together.  And then my dad comes out to probably 50 percent of the tournaments, maybe a little less. So it’s always really nice to have him and my mom comes out too. I love it when we’re all together.” 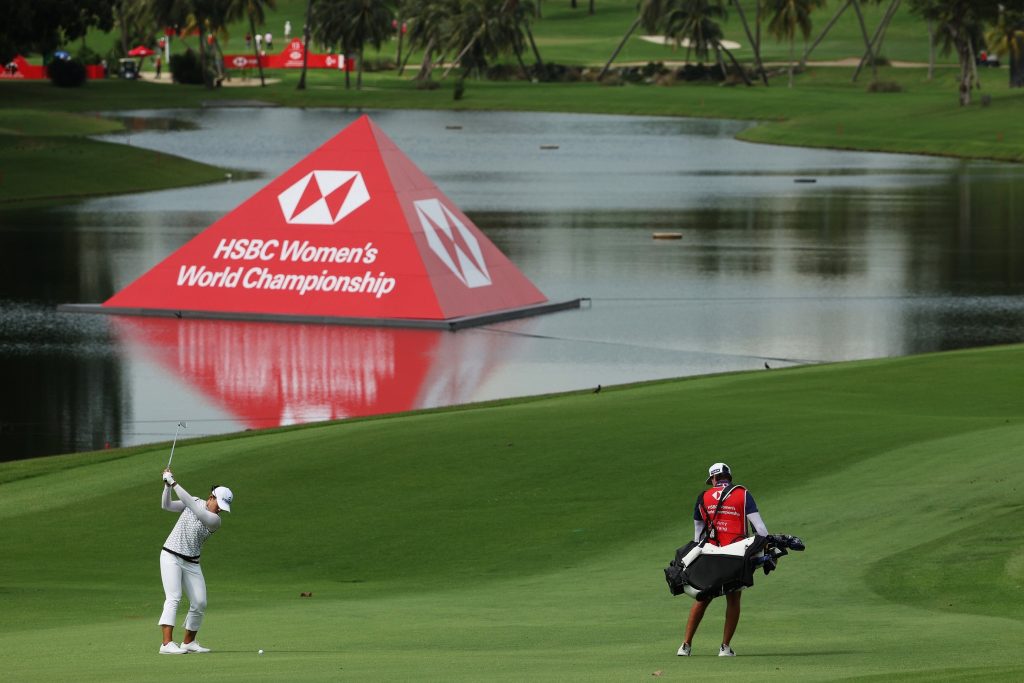 Amy Yang of South Korea plays her second shot on the fifth hole during the Second Round of the HSBC Women’s World Championship at Sentosa Golf Club on March 4, 2022 in Singapore. (Photo by Andrew Redington/Getty Images)

Khang added: “Today was a good round. I just really tried to stay patient out there. This is my first week with Missy because my regular caddie had an emergency health issue he had to take care of. So, Missy and I have just kind of been chatting the whole round, and it’s been pretty easygoing for us.”

Overnight leader Patty Tavatanakit wasn’t able to repeat the same form she showed in round one. The Major winner from Bangkok closed for 2-over par 74 in a round that included 5 bogeys. Singapore’s Sock Hwee Koh carded 7-over par 79 for the round.

The Singapore Airlines Round of the Day was awarded to Jin Young Ko with the Lexus Drive of the Day going to Patty Tavatanakit for her drive from the 14th tee.