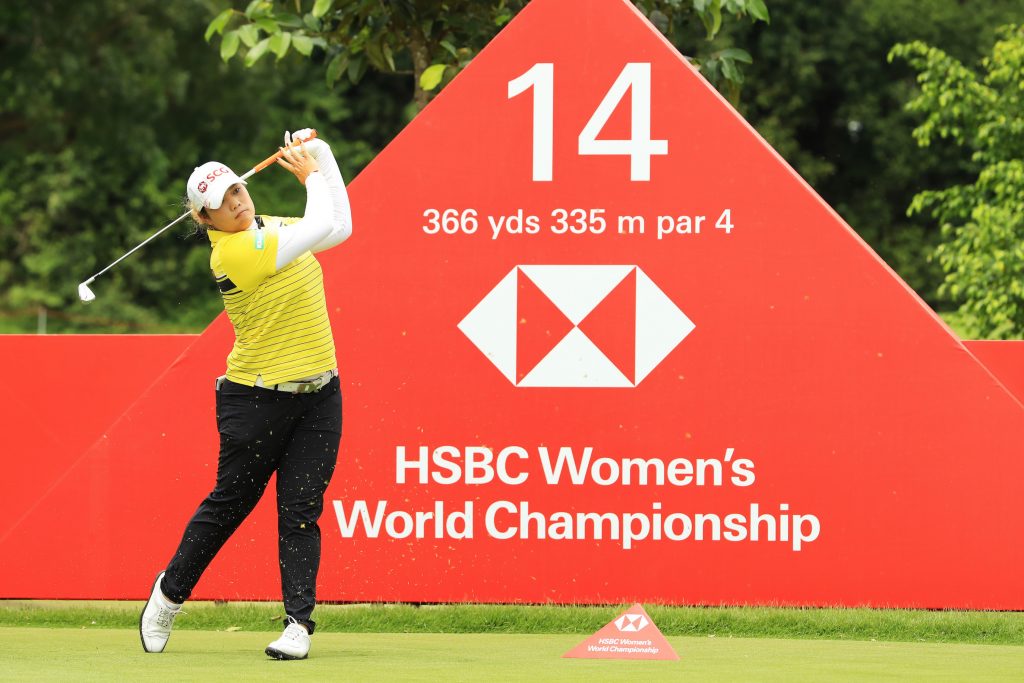 Ariya Jutanugarn of Thailand plays her shot from the 14th tee during the first round of the HSBC Women’s World Championship at Sentosa Golf Club on February 28, 2019 in Singapore. (Photo by Andrew Redington/Getty Images)

SINGAPORE, 28 February 2019: It was a dream start for Ariya Jutanugarn as the women’s world No. 1 powered her way to the top of the leader board in round one of the HSBC Women’s World Championship at Sentosa Golf Club.

On a day when several of the big names struggled, the Thai showed her class, shooting a bogey-free round of four-under 68 to finish tied alongside Celine Boutier, Yu Liu, Amy Olsen and Minjee Lee.

The New Tanjong Course has clearly been set up to provide the 63-player field with a stern test of golf, with Ariya saying: “Actually, (the greens) have been pretty fast, but it’s tough because it’s really firm. It’s so tough to hit close to the pin. Especially my front nine because I didn’t realise that they played that firm.”

Teeing off in the morning’s last flight alongside Ariya was Australia’s Minjee Lee who shot a colourful round featuring three bogeys, five birdies and an eagle on the par-five 8th hole. 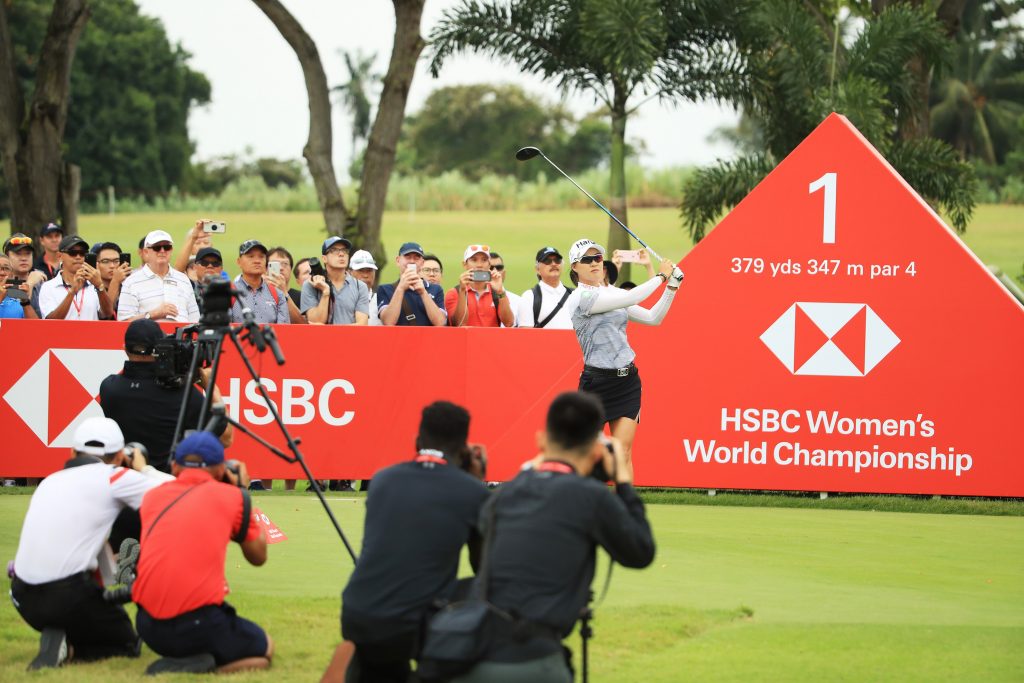 Minjee Lee of Australia plays her shot from the first tee during the first round of the HSBC Women’s World Championship at Sentosa Golf Club on February 28, 2019 in Singapore. (Photo by Andrew Redington/Getty Images)

World No. 3 Lee, who finished second at last week’s Honda LPGA Thailand, said: “I had a bit of an up and down front nine. I think I made three bogeys, and I made one eagle and two other birdies on the front nine. So, I turned 1 under. I was a little bit more consistent on the back nine and I finished with three birdies. Yeah, it was nice to finish with birdies.

“The course is actually playing pretty tough. I mean, it’s a bit more bouncier and it’s playing a little longer for me. So just keep hitting fairways and try and get a little bit more length off the tee and have a good short game. That’s pretty much what I’m going to work on,” added Lee.

Alongside the duo is China’s Yu Liu, who was the story of the day as she birdied the 18th. The 23-year-old, who came through the ranks of the tournament sponsor’s CGA-HSBC Junior Programme, explained what her round meant to her:

“It meant so much because ten years ago, I got this opportunity playing as a junior golfer with two other girls from China to play in the Pro-Am (in Singapore). I just had a blast and that really kind of set my career goals. Before that, I didn’t really know what to expect playing golf. But afterwards, I just felt like this is really something that I wanted to achieve. From then on, I’ve been working pretty hard.” 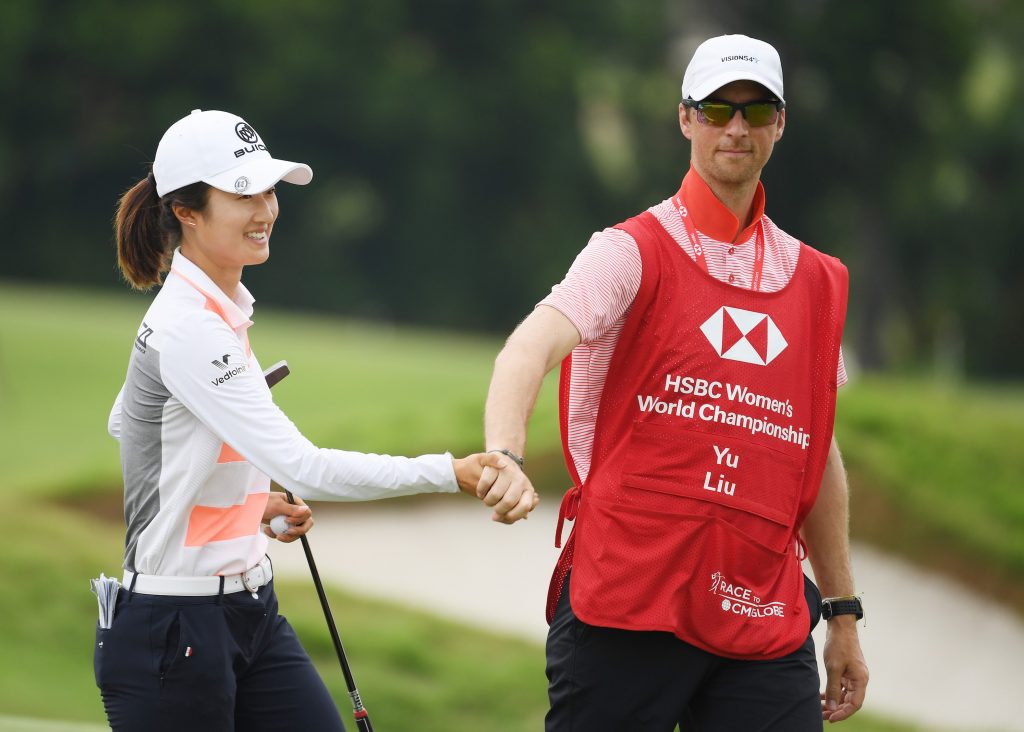 Liu is starting her second year on tour and will be looking to make an impression at ‘Asia’s Major’.

Boutier, who claimed her maiden tour victory at this year’s ISPS Handa Vic Open had a quiet first nine holes, dropping one shot on the 11th but lit up after the turn, shooting consecutive birdies on the first three holes followed by two more on the seventh and eighth. 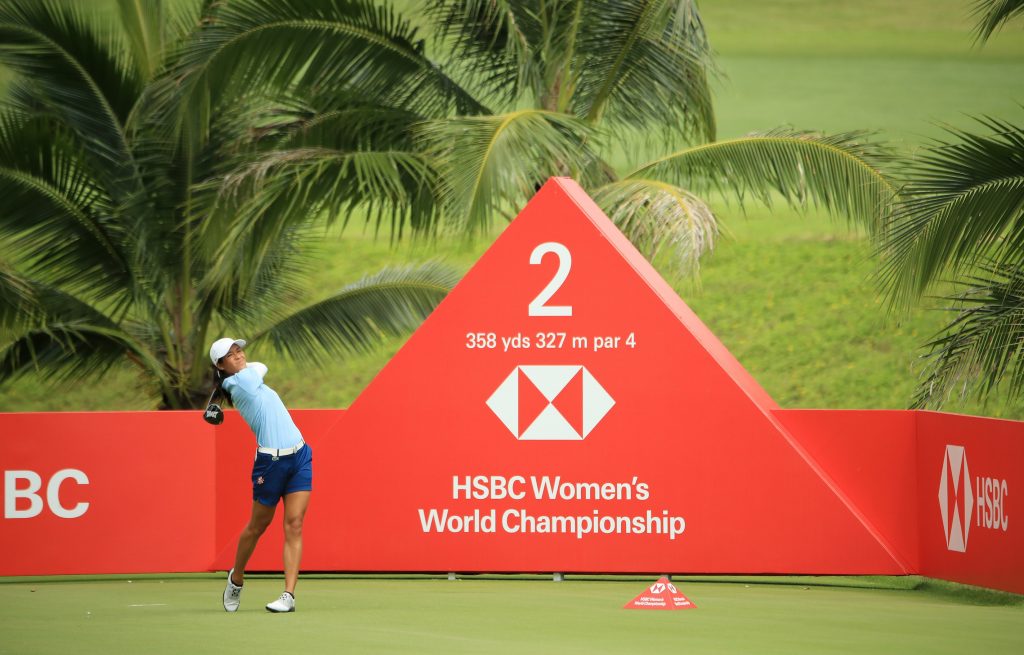 Celine Boutier of France plays her shot from the second tee during the first round of the HSBC Women’s World Championship at Sentosa Golf Club on February 28, 2019 in Singapore. (Photo by Andrew Redington/Getty Images)

Playing for the first time on the course, Boutier said: “I think it fits my game more than last week. So I was kind of happy when I played it because I could see myself playing well on this course. I kind of like the layout and just the way you have to play it. It’s better for my game I guess.”

Defending Champion Michelle Wie endured a tough return to the course on which she had triumphed so spectacularly last year. Clearly struggling following her wrist operation last October, the American withdrew on hole 15 at 10-over par.

Singapore’s Amanda Tan also had a tough round. Unable to repeat the kind of form she showed in the regional qualifier a month earlier, Tan shot 11-over par but is already focused on round two:

“I didn’t play good. I didn’t score well. I didn’t putt good at all. Yeah, so putting is something I need to work on. I also didn’t hit a lot of greens which didn’t help, and then when I missed it, I missed it on the wrong spots. So overall, not a good round, and hopefully a better three days (ahead).”