SINGAPORE, 26 February 2019: Defending Champion Michelle Wie is clearly revelling in her role as
defending champion ahead of the HSBC Women’s World Championship, which tees off on Thursday,
28 February, at the Sentosa Golf Club.

The American overcame a five-shot deficit heading into the final round of last year’s tournament to
pull off one of the most remarkable victories of her career – a feat that has clearly left its mark on
the star-attraction at the 12th edition of the tournament, often referred to as “Asia’s Major”.

“It’s great. Singapore is definitely one of my favourite spots out of the year. It’s a tournament that I
look forward to all year, and it’s definitely a different experience coming back as defending champion. It’s really cool. It’s awesome to see my picture kind of everywhere and it’s pretty neat,
especially coming on 18, I look, ‘oh, there I am’,” she said.

“I feel especially honoured to be a defending champion of such a prestigious tournament. I feel
extremely lucky to even be here this year, so I’m just soaking it all in and having a lot of fun, and, you
know, really excited for the tournament to begin.” 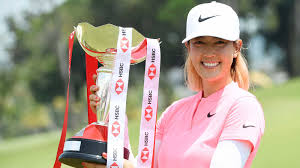 The five-time LPGA Tour winner also showed her philosophical side. Asked if her approach to the
game has changed since returning from a series of injury set-backs, the 30-year old said: “I just try to make lists every day of what I’m grateful for, especially the last couple of years have been
pretty tough. You know, with injury and got down a little bit, so every day, I just try to think about
the little things that I’m grateful for.

“Like this week, I’m just grateful that I’m here. So I’m trying to soak in everything. Just trying to keep the good vibes going. I still want to win golf tournaments. I want to win majors. The goals are still the same. I just want to be healthy and take it day by day and just work hard and see where that takes me.”

World No.1 Ariya Jutanugarn makes her fifth start at the tournament. Having been the star-attraction at her home LPGA tournament in Bangkok last week, you could sense her relief at being able to go beneath the radar in Singapore.

“First, I love to be here. I love Singapore so much. Every time I’m looking forward to coming back here,” she said. “I’m going to say the course is always tough, a real challenge, but maybe I keep playing well
because I just love Singapore.

“I feel good after last week because I feel like right now I have no pressure. I struggled in my first two tournaments, and last week, I thought it was going to be worse because I’m so nervous, lots of people expected me to play well. But actually, last week I played a lot better, so this week, I feel a lot more comfortable and feel no pressure anymore.”

Jutanugarn who has claimed two top-5s and a runner-up finish in Singapore, will surely be one to
watch come the weekend.

Meanwhile, England’s Georgia Hall returns for her second outing at HSBC Women’s World
Championship. Asked what her goal is for this week, the winner of the 2018 Women’s British Open said: “Obviously I’d love to win it but I think my last few rounds were hard. I had some really good
rounds and then I had some poor rounds that kind of got me out of the tournament.

“So I think my main thing is just consistency with four rounds, not throwing a bad round in there I think is going to be important this week because it’s quite a tough golf course as well. I think I’ve worked on putting quite a bit. So those are my goals, I think.

“I think it’s important to have small goals and your end goals get there, not just focus on the end goal.”

Away from the golf, the 22-year old from Bournemouth can be expected to be seen dining out on the top deck of Marina Bay Sands with long term boyfriend Harry. “I just want to go and see that (this weekend). That’s kind of the big thing to look forward to outside of golf,” she said.