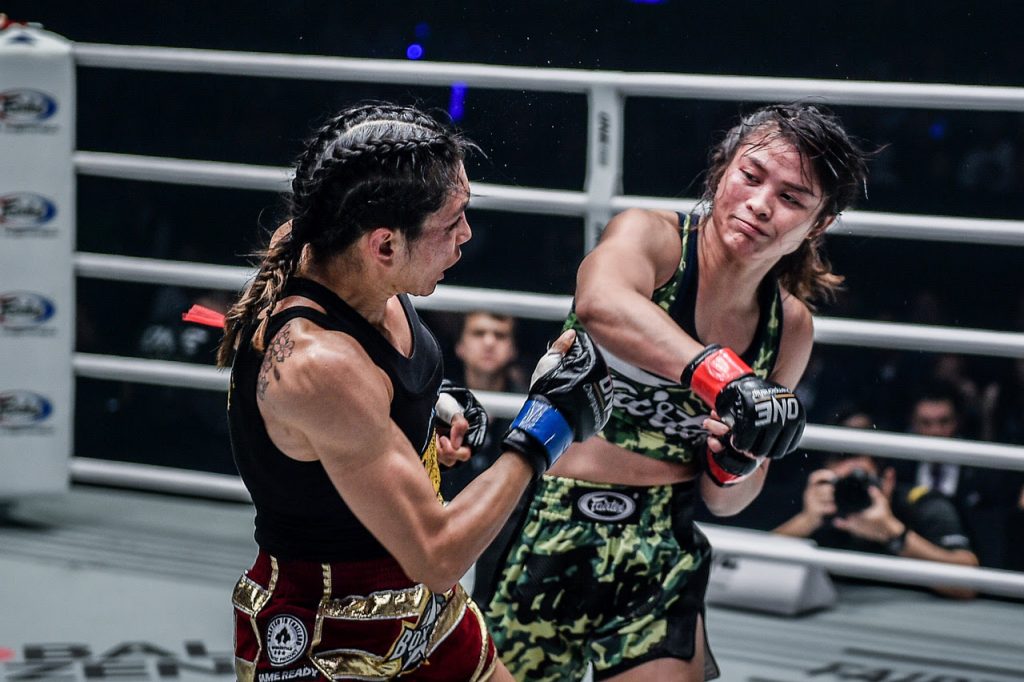 It took a while for the venue to warm up.

I was early, expecting the One Championship fights at the Singapore Indoor Stadium on February 22 (Friday), 2019, to start on the dot, 6pm.

Instead it was nearly 7pm before the preliminary card started.

I and my friend Anuar Tuleshov, a good boxer from Kazakhstan, sat fidgeting in our seats, waiting for the action to begin.

It was my first time at a One Championship event, so expectations were high.

ONE: Call To Greatness was to feature 11 exciting bouts.

There was loud music, colourful lights and giant screens with information about the fighters and fights to keep us engaged.

We munched popcorn and sipped soft drinks till the bouts began.

There was only a smattering of spectators to watch the preliminary card. It did not bother to me who won or lost.

I liked the way the fighters walked in, with blaring music and the accompanying drama. The emcee had a voice that roared at high pitch.

Where were the ring girls? They were scarcely seen.

The picture changed totally when it neared 8.30pm. The indoor stadium filled up with nearly 10,000 fans, most of whom had turned up to watch Singapore’s Amir Khan take on Costa Rican submission specialist Ariel “Tarzan” Sexton in the semi-final of the ONE Lightweight World Grand Prix.

The drama had begun, with the first fighter, Indonesian Rudy “The Golden Boy” Agustian, walking up to the ring with a swagger.

He made quick work of Cambodian striker Khon Sichan to claim his third consecutive victory in the promotion.

Agustian caught Sichan with a rear-naked choke midway through the first frame. With Sichan in no position to escape, Agustian applied pressure on the submission and forced the tap.

Wow! The bout finished so quickly.

Imanari coerced Kwon to wave the white flag with his patented heel hook, registering his 27th career win by way of submission.

It was clinical stuff. I thought the Korean would last the distance as he was nimble on his feet. It just did not work for him as he took a severe knock on his leg and hurt badly.

It looked like the Japanese would rule the night.

The Japanese showed off her impressive grappling prowess as she locked in a wrenching Americana to force her opponent to tap in just under two minutes. 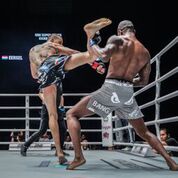 The action was getting heated and  Regian “The Immortal” Eersel of the Netherlands authored a jaw-dropping victory in his second appearance on the ONE Super Series stage, defeating Nigeria’s Anthony “The Assassin” Njokuani.

Eersel patiently waited for the right moment to pounce on his hard-hitting counterpart. When he saw a good opening to strike in the second round, the Dutchman delivered a hard-right hand and a follow-up knee to the midsection to send Njokuani to the canvas.

Njokuani failed to answer the count of 10, compelling the referee to halt the bout.

There was more even action when China’s Zhang Chenglong took on Kong Sambo of Cambodia.

In the end, Zhang did just enough to earn the decision on two of the three judges’ scorecards to win in his maiden ONE Championship appearance.

I felt sorry for Kong. He had put up a good fight.

Thailand’s Petchdam Petchyindee Academy walked up to the ring in style. He wore a “Baby Shark” outfit and had his hair dyed yellow.

The crowd had lot to cheer about given that appearance.

The Thai did not disappoint. He produced a tremendous striking performance to defeat Masahide “Crazy Rabbit” Kudo of Japan in the ONE Super Series kickboxing contest.

Operating behind his southpaw stance, Petchdam hammered Kudo with his powerful left-roundhouse kicks. The Muay Thai star went for the kill in the second round, knocking out Kudo with a solid left straight.

The Thai fans seated next to me, who had flown in from Bangkok, could not stop screaming.

They were full-throat again when former ONE Strawweight World Champion Dejdamrong Sor Amnuaysirichoke of Thailand clashed with the Philippines’ Jeremy “The Jaguar” Miado.

It was an exciting opening round as the two strawweight contenders traded ferocious combinations. But it was all Dejdamrong in the second round. The Thai legend stuffed a takedown from Miado and proceeded to unload a barrage of unanswered knees to earn the stoppage victory via a technical knockout.

He avenged a previous loss to Miado.

Holzken was a step ahead for the majority of the three-round contest, catching Haida with precise punches and well-placed kicks. Haida attempted to mount a comeback late in the bout, but his rally came up short and Holzken was hailed victorious on all the judges’ scorecards.

When the next fight was about to begin, Anuar turned to me and said “watch out for Turkey’s Saygid “Dagi” Guseyn Arslanaliev, he is really top-class”.

Actually, it ended in just 25 seconds. 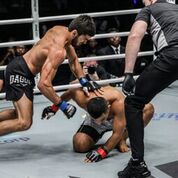 One shot was all Arslanaliev needed to end the bout. He landed a massive left hook that immediately dropped former ONE World Title challenger Ev “E.T.” Ting to the mat.

“Dagi” finished the job with a series of thunderous ground strikes to earn the stunning knockout win which earned him a ticket to the ONE Lightweight World Grand Prix Semi-Finals.

Then it was the fight that almost the entire crowd, including me and Anuar, had turned up to watch.

Amir received thunderous cheers as he danced up to the ring.

He started off brightly and twice nearly had sexton on the ropes, but the Singaporean just could not finish off the fight. 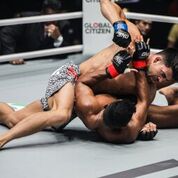 The Costa Rican managed to survive a number of precarious situations and remained relentless in his pursuit to take the action to the ground. Early in the third round, he easily took Amir down and immediately fastened the submission to force the Singaporean to tap.

It was clear that Sexton was strong and he grappled his way into the Semi-Finals of the ONE Lightweight World Grand Prix after submitting former ONE World Title contender Amir with a rear-naked choke.

I was disappointed. So was the majority of the crowd. Amir did put up a good fight. But he let Sexton off and the Costa Rican seized his chance to emerge triumphant.

Stamp implemented a solid game plan as she pushed the pace and punished Todd with a punch-heavy attack. After five gruelling rounds, Stamp was declared the winner on all three of the judges’ scorecards to make history as the first two-sport World Champion in ONE Championship history.

I had witnessed nearly three hours of world-class martial arts action. It was exciting. But it would have been better if some of the bouts were more closely fought.

Official results for ONE: CALL TO GREATNESS