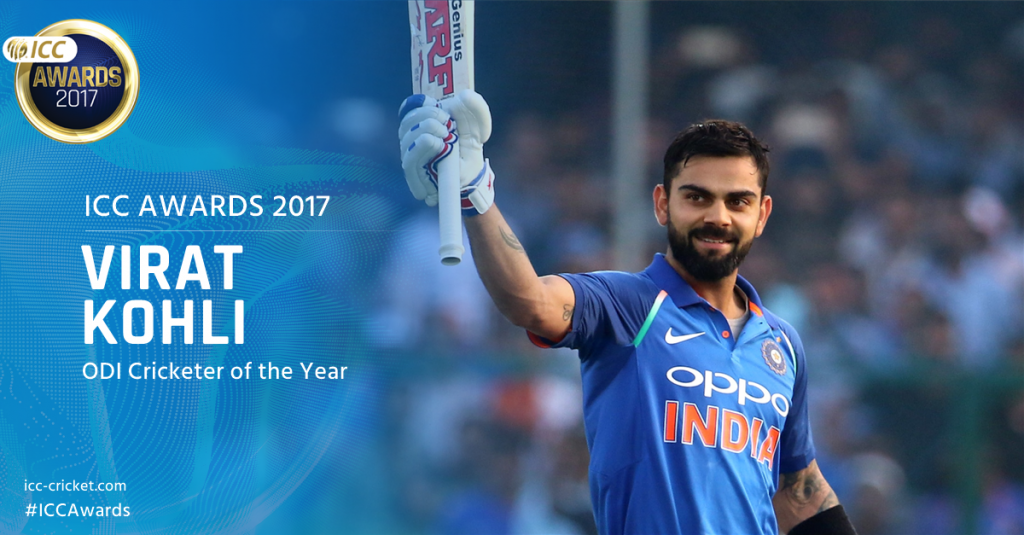 India captain and run-machine Virat Kohli has won the prestigious Sir Garfield Sobers Trophy for the ICC Cricketer of the Year 2017 as the International Cricket Council announced the men’s individual award winners of 2017 on January 18.

The voting period ran from 21 September 2016 to 31 December 2017, and the winners were selected by a voting academy that comprised members of the media, commentators and former players from the 12 Test playing countries.

Kohli, who is the 13th player to win the Sir Garfield Sobers Trophy since 2004, was in blistering form during the voting period when he scored 2,023 runs in 18 Tests with eight centuries and three half-centuries. He scored 1,818 runs in 31 ODIs with seven centuries and nine half-centuries and 299 runs at a strike-rate of 152.55 in 10 T20Is.

In the race for ICC ODI Cricketer of the Year, Kohli beat the challenge of Pakistan’s Hasan Ali and India team-mate Rohit Sharma, who finished second and third, respectively.

“You keep working hard every day of your life as a professional cricketer, be it training or practising on skill sets that are required to compete at this level. Job satisfaction on the field is paramount, but international recognition by the ICC is something that every player feels privileged as it is at a global level and is something that is very special to all the cricketers because you are competing against the best international cricketers across the globe.

“I think 2016 for me was a breakthrough year and I was able to continue in 2017 also. I think I worked even harder in 2017 and understand this has been a good phase for me but I will have to work even harder in future to play the same level of cricket I have been able to play in the past two years. But yeah, 2017 was indeed a very special year for me.”

ICC Chief Executive David Richardson said: “On behalf of the ICC, I want to congratulate Virat Kohli for winning the Sir Garfield Sobers Trophy. It is the most prestigious individual award in cricket, named after one of the most iconic cricketers and recognises a player for outstanding performances across all formats over a period of time. Only the best of the best have won this award and Virat certainly deserves to be in that select group of cricketers.

“The fact that he has also won the ODI Cricketer of the Year and was named by the Voting Academy as the captain of both the ICC Test and ODI team demonstrates the impact he has had across the sport over the last year.

“Many congratulations to Steve Smith on his award as the ICC Test Cricketer of the Year. Like Virat, Steve has been exceptional this year, demonstrating the qualities of a truly great Test batsman. Both players are wonderful adverts for the game of cricket and I look forward to their continuing good form into 2018.

“In fact 2017 has been an action-filled year for fans across the globe enjoying the ICC Champions Trophy and the ground-breaking ICC Women’s World Cup. I thank not only the individual award winners but all the cricketers for making the last year an immensely memorable and enjoyable one for the entire cricket family.”

Australia captain Steve Smith finished second to Kohli for the Sir Garfield Sobers Trophy, but has outvoted his India opposite number to win his maiden ICC Test Cricketer of the Year award.

This was the 28-year-old’s third ICC award, having lifted the Sir Garfield Sobers Trophy and the ICC Test Cricketer of the Year in 2015, which had made him only the seventh player to win the two awards in the same year.

In the voting period, Smith scored 1,875 runs in 16 Tests with eight centuries and five half-centuries.

Reacting to the announcement, Smith said: “It’s a great honour to receive this award for the second time, having won it in 2015 as well. It’s called Test cricket for a reason, and I’ve enjoyed that test of my ability over the past 12 months.

“I got six Test hundreds for the year in 2017, which I was pleased about. I was pleased with the way I played but what pleased me most of all was that I helped us win Tests and, most importantly, The Ashes. To make a contribution in big matches and in big series and assist the team is what it is all about for me, and if I’m doing that then there’s a good chance that awards like this will follow.”

Hasan Ali capped a memorable year by becoming the first Pakistan player to be voted the ICC Emerging Cricketer of the Year. The 23-year-old had won the Player of the ICC Champions Trophy 2017 award and finished the year as number-one ranked ODI bowler after having started the year in 75th position.

An excited Hasan Ali said: “It has been memorable past 16 months for me as a young player and Pakistan as a team. And to be recognised by the game’s governing body as its emerging cricketer, is something that means a lot to me and the Pakistan cricket family. This acknowledgement will not only inspire me to do even better in the coming seasons but will also convince the next generation of cricketers that hard work and good performances can never go unnoticed.

“I would like to thank all my peers for their support, especially each and every member of the Pakistan cricket team as we showed the world what we are capable of. This award is for all those who believed and backed us in the journey, and look forward to their continued patronage as the next 18 months will be more challenging with the World Cup in 2019.”

Rashid Khan, Afghanistan’s 18-year-old wrist spinner, has been named the ICC Associate Cricketer of the Year after he helped his side to victory in the four-day first-class ICC Intercontinental Cup by finishing with 23 wickets in three matches.

Rashid, who is the second Afghanistan player to clinch this award, was also the leading ODI wicket-taker in the voting period with 50 wickets in 19 matches, while 13 T20Is also yielded him 23 wickets.

Rashid Khan was over the moon after hearing the news, when he said: “I’m really honoured and happy to be named as the ICC Associate Cricketer of the Year. 2017 was a good year for me and I have lots of memories from last year, which are going to stay with me for a very long time.

“I want to thank to my management, my family and my friends the way they have supported me throughout the year, and prayed for me and my success. I will try my best to keep the same momentum in 2018.”

India’s Yuzvendra Chahal (six for 25 v England) narrowly edged out Evin Lewis of the Windies (125 not out v India) and Rohit Sharma (118 v Sri Lanka) to win the ICC T20I Performance of the Year. He is the second India player to win this award after Yuvraj Singh (2008).

Shrubsole displayed humility and exemplary sportsmanship after the ICC Women’s World Cup semi-final against South Africa in Bristol when, after hitting the winning boundary with two wickets and two balls to spare, she opted to comfort distraught captain Dane van Niekerk before celebrating with her team-mates. It was an act reminiscent of Andrew Flintoff consoling Brett Lee at Edgbaston in 2005 and Grant Elliott comforting Dale Steyn after the ICC Cricket World Cup 2015 semi-final in Auckland, demonstrating the true spirit of cricket.

Pakistan stun India to win the ICC Champions Trophy 2017 has been voted by the fans around the world as the inaugural winner of the ICC Fans Moment of the Year.