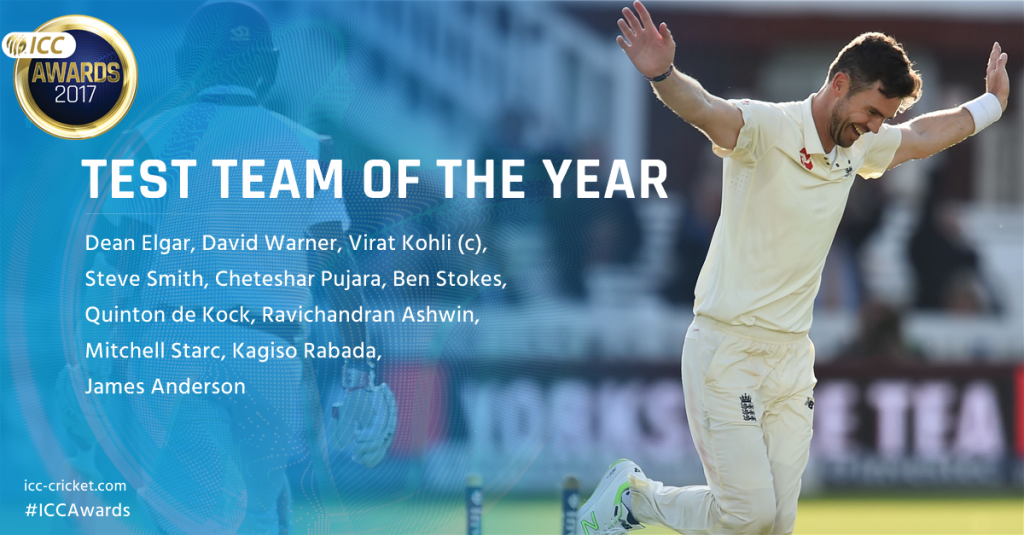 India’s Virat Kohli has been named captain of the ICC Men’s Test and ODI Teams of the Year 2017, which were announced by the International Cricket Council on January 18.

Apart from his own stellar performances across both the formats during the period between 21 September 2016 and 31 December 2017, Kohli also inspired India to the No. 1 and No. 2 rankings in Tests and ODIs, respectively.

Kohli is also one of four players to feature in both the Test and ODI sides, with the other three being Australia’s David Warner, Ben Stokes of England and South Africa wicketkeeper-batsman Quinton de Kock.

Warner, Ravichandaran Ashwin, Stokes and Mitchell Starc were members of the ICC Test Team of the Year 2016, while Warner, de Kock, Kohli, AB de Villiers, Starc and Rohit Sharma have been selected for the second year running in the ICC ODI Team of the Year.

For de Villiers, this is the seventh time in eight years that he has been chosen in the ICC ODI Team of the Year.

The ODI side comprises players from seven countries and is made up of one Afghanistan player (Rashid Khan), one Australian (Warner), one Englishman (Stokes), three Indians (Kohli, Rohit Sharma and Jasprit Bumrah), one New Zealander (Trent Boult) two Pakistanis (Babar Azam and Hasan Ali) and two South Africans (de Villiers and de Kock).

While selecting the sides, the voting panel* took into consideration player statistics, as well as key game-changing performances during the voting period.