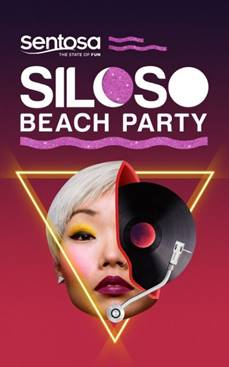 SINGAPORE, 9 November 2018: Back for the 12th year, this edition of Sentosa’s Siloso Beach Party (SBP) is set to be its best yet! Party the year away and usher in 2019 with a dazzling array of fireworks and rave tunes at the stroke of midnight. Partygoers can expect 12 hours of non-stop electrifying music and a foam zone at Singapore’s largest beach countdown party!

Kicking off at 6pm on 31 December, this year’s DJ line-up will take the countdown to the next level with a host of internationally renowned DJs. Rising EDM star DJ Jay Hardway will be headlining the 12th edition of SBP with his iconic tracks and remixes, completing an exciting line-up that is primed to thrill and excite partygoers as they welcome in the New Year.

Hailing from Drunen in the South of the Netherlands, Jay Hardway started producing and performing since he was 14 years old. A rising start in the EDM scene, he has multiple releases both solo and with fellow scene greats and millions of plays and sales to his name.

Meanwhile, exciting 11.11 deals are in store for guests as part of the upcoming 11.11 Single’s Day celebrations! For just three days from 9 November (9am) to 11 November (11.59pm), grab 50% off advance standard tickets ($58) in a 1-for-1 promotion at PouchNation’s online portal: https://events.pouchnation.com/event/sbp1819

Joining DJ Jay Hardway on stage will be some of Asia’s most talented DJs, including this year’s Sentosa DJ Spin-Off winner, Ezra Hazard!

South Korea’s first female EDM DJ, DJ YouKeep is also set to amaze the crowd with her dynamic performances, powerful voice and stylish visuals, while DJ MAKE YOU FREAK will wow the crowd with their fresh beats undefined by any genre.

Representing the local DJ scene is one of Singapore’s most sought after DJs, DJ Kaylova – best known for her extraordinary Progressive, Electro and House performances; DJ CADEN, who was champion of the inaugural 2015 Sentosa DJ Spin-Off competition and guest DJ at several big clubs such as Altimate, AVRY, BANG BANG, Fleek and WAN; Twins Gone Wrong, the first ever Singaporean entertainers to perform in the World DJ festival held in Seoul’s Olympic Stadium; and DJ Jensen who has been part of the SBP family since the party’s first edition in 2007.

Partygoers who miss out on the ‘11.11’ deal can purchase advance standard tickets at $58, which are currently on sale from now to 26 December.

Online purchase of standard tickets at $68 will be available from 27 to 31 December (till 4.00pm). Thereafter, tickets can still be purchased over the counter at the same price.

For those purchasing a bundle of four tickets, they will enjoy 20% off advance standard tickets from now till 31 December.

For updates on Siloso Beach Party 2018, you can also visitwww.sentosa.com.sg/silosobeachparty