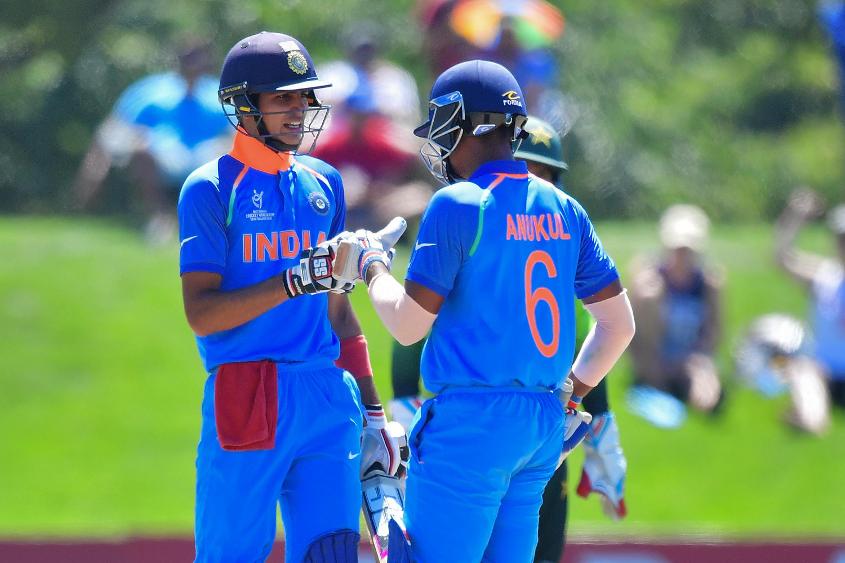 Shubman Gill produced a classy century in the face of some fine fast bowling as India marched into their sixth final at the ICC U-19 Cricket World Cup with a facile 203-run victory over Pakistan at the Hagley Oval in Christchurch, New Zealand, on Tuesday (January 30).

In front of broadcast cameras, Gill’s innings of 102 not out in the second Super League semi-final helped India post a challenging 272 for nine even as Pakistan bowlers Muhammad Musa and Arshad Iqbal bowled their hearts out to share seven scalps.

In reply, Pakistan were bundled out for 69 in 29.3 overs, their lowest total to date in the tournament.

In the final in Tauranga on 3 February, India play Australia, whom they had defeated by 100 runs in the preliminary league. Both the sides have won the title three times each, which means Saturday’swinners will become the most successful nation in the history of the tournament.

In the third-fourth position play-off, Pakistan will take on Afghanistan on 1 February and will aim to avenge their five-wicket defeat in their tournament opener.

Meanwhile, in the match to decide the seventh place, England defeated New Zealand by 32 runs at the John Davies Oval in Queenstown with Tom Banton’s fine knock of 112 helping score 261 for seven and Evan Woods and Will Jacks grabbing three wickets each to stifle the chase.

Gill capitalised on his fine form to produce a timely century. Indian batsmen were made to wage it out in the face of inspired spells from Musa and Arshad and the three-time champions needed that one big innings to set a challenging target.

Gill, who was later declared player of the match, said he was only looking to score maximum runs rather than get to a century.

“This was a special innings in a big match against Pakistan and their bowlers were bowling very well. I thought 250-260 would be a good-enough total for the pacers to defend. I’m now looking forward to playing Australia in the final.”

Gill, who has played first-class cricket for Punjab and was recently picked by Kolkata Knight Riders to play in the Indian Premier League, took the mantle on himself with an authoritative century. Gill played along the ground for the first part of his 94-ball innings but was not afraid to loft the ball later, even though all his seven boundary hits were fours.

This was Gill’s sixth consecutive score of 50 or more. He had struck two fifties on a tour of England in August and three earlier in this tournament – 63 against Australia, 90 not out versus Zimbabwe and 86 versus Bangladesh in the quarter-finals. He did not get to bat in a 10-wicket win over Papua New Guinea in the preliminary league.

Gill got to his century off what was to be the last ball of the innings. He lofted Musa to long-off, where captain Hassan Khan dropped an easy catch. Gill ran two to move from 99 to 101 but was to learn later that it was a no-ball. He then got a single off the resultant free-hit to complete the innings.

Pakistan were never in the chase as fast bowler Ishan Porel removed openers Zaid Alam (7) and Imran Shah (2) in successive overs and grabbed the prized wicket of Ali Zaryab to reduce Pakistan to 20 for three. Rohail Nazir’s score of 18 was the highest score in the innings while Porel finished with impressive figures of 6-2-17-4.

Pakistan captain Hassan Khan said his team had not buckled under pressure but were outplayed: “I don’t think the team was feeling any pressure. A lot of the boys were high on morale and were enjoying themselves. But Shubnam started well, and we misfielded a few as well.

“I think we did well (in India’s innings), given how the pitch was, our fast bowlers and spinners did well. If we had put in more effort in the field, we might have been able to keep them to a lesser total and it would have been a different story.”

The pair added 139 runs in 26 overs to resurrect the side from a precarious 48 for three after pace bowler Luke Georgeson bowled Liam Banks (10) to trigger a mini collapse. Georgeson also bowled Davies later in the day and finished with impressive figures of 10-1-29-3. All-rounder Rachin Ravindra took two for 80 with his left-arm spin bowling.

For New Zealand, Finn Allen (87) and Katene Clark (60) batted well but the side lost the way with some run outs and due to some tight bowling. Will Jacks (3-41) and Evan Woods (3-44) were the main wreckers while Dillon Pennington took two wickets for England.