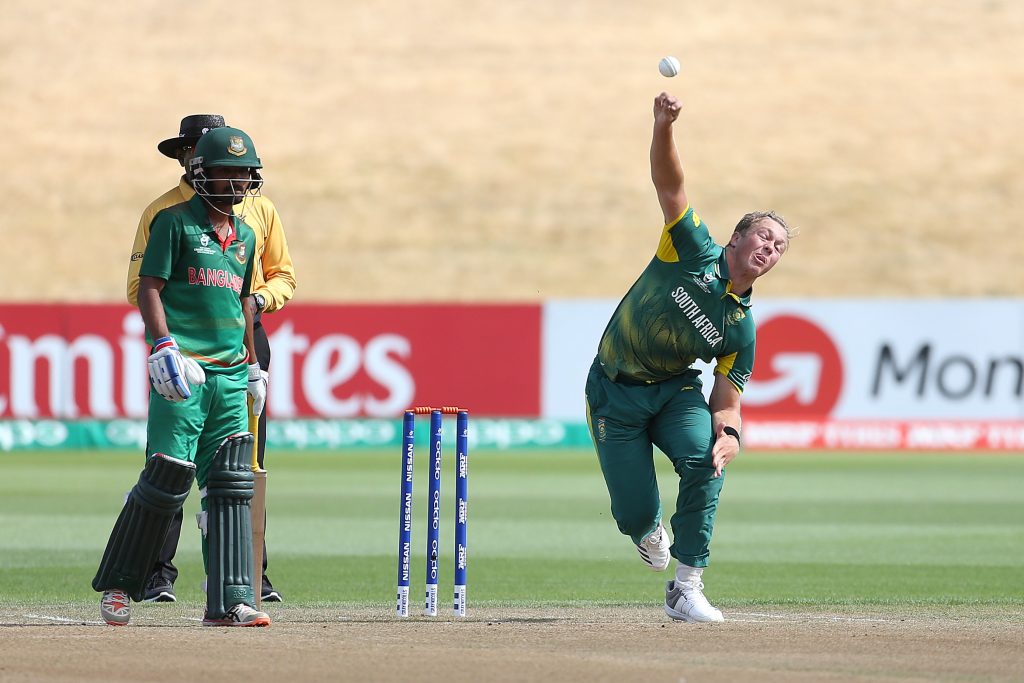 Jones, playing only his second match of the tournament, grabbed five for 33 and left-arm bowler Mnyaka took three for 27 as Bangladesh were bowled out for 178 in 41.4 overs after deciding to bat in the fifth-sixth position play-off match.

The 2014 champions did not face any problems and reached 180 for two in 38.3 overs as captain Raynard van Tonder played a fluent knock of 82 (99b, 7×4, 2×6) to tally his  total runs to 384 in the tournament , joining former captain Graeme Smith as the joint-third highest aggregate of runs for a South Africa batsman in an ICC U-19 Cricket World Cup.

Van Tonder later said the players had done well to grab their opportunities: “We didn’t play well in the quarter-finals, but the boys did well to come back strongly in the last two games. I’m sure all the boys learnt a lot and we are going to take a lot from this experience going forward in our careers.”

Bangladesh captain Saif Hassan said his team should have got more runs in the match today:“These have been good conditions for us and they’ve given us good exposure; we don’t get these conditions at home, so hopefully this experience will help us in the future. Afif and Shakil did a good job today and we are proud of them.”

Van Tonder reached his half-century with a pulled six over the square-leg fence off leg-spinner Mohammad Rakib and continued in the same vein, adding 117 runs for the unbroken third wicket with all-rounder Hermann Rolfes (44 not out, 51b, 7×4) to eradicate any hopes of a Bangladesh fight back.

Opener Matthew Breetzke, who had notched 115 against New Zealand in their last match, was another batsman to come up with a useful contribution, his 61-ball knock seeing him score 36 with the help of two fours and one six.

Earlier, the Bangladesh batsmen got into trouble playing some indiscreet shots as Jones and Mnyaka ran through the batting order, their combined eight wickets coming mainly from catches behind the wicket, in the slips or in the point region.

Jones, who was later declared player of the match, said he had learnt a lot from the exposure: “I’m very fortunate that my parents are here to watch me play. I’ve loved the tournament and I’m going to take something out of it. Sticking to our plans was the key today, I hit the lengths I wanted to.”

It was the fourth half-century in the tournament for Afif, who has the experience of five first-class matches. He also finished with eight wickets in the tournament with his off-spin bowling, including a five-wicket haul against Canada in a league match.