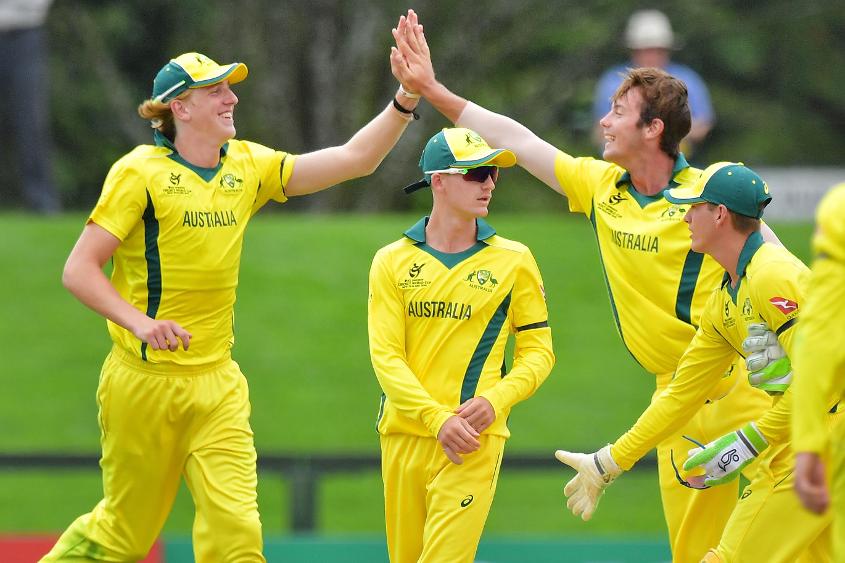 All-rounders Jack Edwards and Jonathan Merlo came up with determined performances as Australia kept themselves in line for a fourth title by registering a comfortable six-wicket victory over Afghanistan in the first Super League semi-finals of the ICC U-19 Cricket World Cup in New Zealand on Monday (January 29).

Edwards slammed a brisk 72 (65b, 8×4, 2×6) as Australia coasted to 182 for four in 37.3 overs after Merlo’s four for 24 had helped bowl out Afghanistan for 181 in 48 overs to end the Asian champions’ title aspirations in a match played in front of broadcast cameras at the Hagley Oval in Christchurch.

Australia await the winners of the second semi-final between three-time champions India and two-time winners Pakistan at the same venue on Tuesday to see who they get to play in the 3 February day-night final in Tauranga.

Afghanistan will play the losers of Tuesday’s match in the third-fourth position match on 1 February at the John Davies Oval in Queenstown.

Australia captain Jason Sangha said later that they had always been confident of seeing off any spin danger: “We played the spinners really well, though I should say that all three of them bowled well. We saw how destructive they can be as we saw against New Zealand (in the quarter-finals). Our plans against the spinners were really good.

“Jack played his natural game. If anything was in his slot, he went for it. My game was a lot different to that. Everyone had their own plans to the spinners and I thought it worked really well. We did have a look at footage from their spinners but it is actually different to seeing them on video to real life.”

Australia’s depth and maturity stood the team in good stead as they played calmly against a side whose Mujeeb Zadran-led spin attack was seen as a potent weapon. Sangha’s steady knock of 26 contributed in a 77-run second wicket partnership with Edwards that eased the challenge to a large extent.

Edwards played positively early on and made the most of a reprieve off captain Naveen-ul-Haq when Darwish Rasool dropped him at cover-point with the batsman on eight. Edwards was soon to unleash a barrage of boundaries and hit Mujeeb for two sixes in the same over, both over long-off.

Afghanistan leg-spinner Qais Ahmad did remove opener Edwards and Sangha and Naveen-ul-Haq accounted for Jonathan Merlo (17) as Australia slipped to 129 for four in the 26th over, but Param Uppal (32 not out) and Nathan McSweeney (22 not out) ensured there were no more hiccups.

Jack Edwards, who was later declared man of the match, said all his team-mates are capable of facing good spin bowling: “All of us can play spin very well. I went after the spinners early on and the ones batting lower down the order batted well too. I’m at a good place at the moment, it is always good to have runs against your name going into a final. I back myself to hit straight and also get my ones (when going out to bat).”

Earlier, Naveen-ul-Haq bet on his slow bowling when he decided to bat first in overcast conditions, indicating at the toss that he fancied his spin bowlers defending a total.

But the kind of score that he would have wanted was not on the cards as they failed to get partnerships going. Wicketkeeper-batsman Ikram Ali scored a defiant 80 (119b, 8×4) but the best stand that he could manage was of 38 for the fifth wicket with Nisar Wahdat (11).

Apart from these two batsmen, opener Rahmanullah Gurbaz (20) and Mujeeb (12 not out) were the only ones to get into double-figures even as six bowlers got wickets for Australia. Merlo was the most successful with his haul including that of opener Rahamunallah, while the important wicket of Ikram was taken by Merlo.

Afghanistan captain Naveen-ul-Haq said his team were capable of beating Australia after having beaten Pakistan in the league: “We were confident of getting a good score. Probably 230 or 240 would have been a match-winning total. In a low-scoring game you have to field well. We put down a few catches and missed a run out and that was tough I think.

“Our team played well, that is why we were in the semi-finals and take many positives from the tournament. In the third place play-off, we have to play well against Pakistan or India (whoever loses), they are good sides. Pakistan and India are both better sides than Australia. We should finish on a high. It is tough to play a play-off after such a loss but you have to take the loss.”

India and Pakistan look forward to their semi-final after not getting to play each other in the Asia Cup in November.

India coach Rahul Dravid said a match against Pakistan could be a good learning curve for the players.

“It’s exciting to play an India-Pakistan game because Under-19 cricket is all about experiences, about giving them different learning environs. The last couple of years we haven’t had a chance to play Pakistan at any level, so it’s really nice that it has panned out the way it has.

“Irrespective of the result, at least the guys would get to feel what it is to play an India-Pakistan game. Maybe somewhere along the line they will grow up as men and become cricketers who play for India and some of the Pakistani boys will play for Pakistan. They would have then done it before.”

Pakistan captain Hassan Khan said his team would take the India match as any other match rather than worry about the hype.

“There is definitely a build-up to this match but we want to take it like any other match. We have generally done well against India in Under-19 cricket and the boys are really excited and looking forward to the match because we have not played them before.