When Gaurav Kumar from Hong Kong cricket franchise Galaxy Gladiators Lantau asked Singapore’s national team captain if he would like to play for the side in this year’s HK T20 Blitz, Chetan did not hesitate for a second. He said yes and from February 6 to 11 will take part in the tournament, becoming the first player from Singapore to do so. 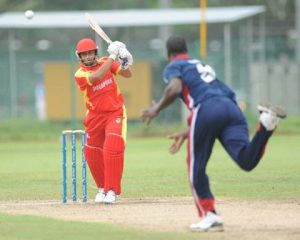 The third edition of the HK T20 Blitz, which will be held at the Tin Kwong Road Recreation Ground in Mong Kok, will see the likes of Kumar Sangakkara, Daren Sammy, Dwayne Smith, Samuel Badree, Kamran Akmal, Luke Ronchi and Wahab Riaz turn out for five franchises. Chetan, who has signed a six-day contract, will appear in the colours of Gladiators, who will be captained by Sangakkara and have Sri Lanka international Seekkuge Prasanna and rising West Indian fast bowling star Jofra Archer in their ranks.

“It will be a good experience,” said Chetan, 32. “It is a good opportunity for a Singapore player to go there and show his abilities against some of the well-known cricketers in the world. Cricketers from Singapore are getting noticed and this allows the national team to move forward.” Singapore leg-spinner Anantha Krishna has just signed a contract to play in the Zimbabwe league.

Chetan, who has excelled for Singapore in World Cricket League and other international matches, will be getting his biggest T20 exposure in Hong Kong. In 2009, he was a squad member of the Indian Premier League outfit Kolkata Knight Riders. In 2015, he featured in a world XI captained by Sanath Jayasuriya that took on a Nepal XI in a charity match in Kuala Lumpur.