Opener Manjot Kalra produced a sparkling 101 not out as India scored a handsome eight-wicket victory over Australia at the Bay Oval in Tauranga, New Zealand, on Saturday (February 3) to become the first side to win four titles at the ICC U-19 Cricket World Cup.

The left-hander struck eight fours and three sixes during his 102-ball knock as favourites India coasted to 220 for two in 38.5 overs, much to the delight of the Indian supporters who formed the majority of the 3,000-odd spectators who turned out for the day-night match. A combined bowling effort had earlier helped dismiss Australia for 217 in 47.2 overs. 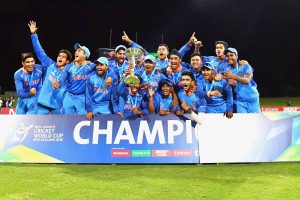 U-19 World Cup winners India pose with the trophy after their win in the final against Australia. Photo by Kai Schwoerer-IDI/IDI via Getty Images.

India had defeated Australia by 100 runs in their opening match and the difference between the two sides was evident once again. The balance of the Asian side powered a bunch of players who were also looking to win the title for the fourth time for their country.

Manjot, who had struck an 86 and figured in a 180-run stand with Shaw that had gone a long way in their earlier win over Australia, proved to be their nemesis once again as he punished both pace bowlers and spinners with disdain. He was not afraid to either create space for his shots or loft the ball.

His opening stand with Shaw (29) was 71, but it was enough to put the team on the road to victory. With in-form batsman and player of the tournament Shubman Gill (31) he added 60 runs for the second wicket and the writing was already on the wall by then. In Harvik Desai (47 not out) he found another able ally as India showcased a broad selection of future stars.

India captain Prithvi Shaw said that this was a moment he would never forget: “It feels really good. Winning this World Cup means a lot. We are really enjoying the moment. We did not expect so much of support from fans here but it has been a really fascinating tournament for us and we have had some really memorable moments.

“Everyone did their job and the bonding that we have has shown in our performances. The score was not a big one but I did not want the boys to be casual because this was a World Cup final. I just told them to build partnerships and not to take it easy. We were helped a lot by our coach Rahul Dravid on how to bat in these conditions and that helped us a lot through the tournament.

“This victory will always be remembered by our lot because you never know whether you win the senior World Cup or not but we had an opportunity here and availed it. There will be lots of memories from here and I can’t express my feelings enough.”

Earlier, Australia had a promising start but fast bowler Ishan Porel removed openers Jack Edwards (28) and Max Bryant (14) to give India an early edge in the match. Edwards, who had scored 73 in their league match which India had won by 100 runs, looked threatening in patches and even got three fours off a Shivam Mavi over, which included an edged four over wicket-keeper Harvik.

After first-change bowler Kamlesh Nagarkoti dismissed captain Jason Sangha (13) caught behind, Australia fought back hard through Jonathan Merlo (76, 102b, 6×4) and Param Uppal (34, 58b, 3×4) with a 75-run fourth wicket stand.

Left-arm spinner Anukul Roy accounted for both batsmen to help India take a firm grip on the match. He took a return catch off a leading edge to see the back of Uppal while Merlo tried a reverse-sweep and was caught in the cover region shortly thereafter.

In between, Shiva Singh’s left-arm spin too got India success when he removed all-rounders Nathan McSweeney (23) and Will Sutherland (5) in successive overs. Australia were 183 for four in the 40thover before McSweeney’s dismissal and lost their last six wickets for 33 runs and failed to play out their quota of overs.

Australia captain Jason Sangha said his team members had a lot of promise but India were the better side in the tournament: “They played very well. The score was not enough, 250 would have been a better score. India batted very well, full credit to them. They played perfect shots, it was hard to set fields for them.

“They won the key moments. For us, it was the first 10 overs were very crucial when they batted very well. Their fast bowling was fantastic, excellent batters, a good all-round team with many players for the future.”

FINAL TEAM PLACINGS (Top 11 Full Members qualify automatically for the ICC U-19 Cricket World Cup 2020 in South Africa, while one qualifier from each region will make up the additional five teams):