After successfully wrapping-up Beethoven250, Chamber Music and Arts Singapore (CMAS) is returning with its next LIVE project – a first-ever local pairing of music with live narration from a novel by Marcel Proust.

It will be held this April at Esplanade Recital Studio. The Salon of Princesse de Polignac ~ Proust and his vignettes of Debussy, Fauré, Satie and Ravel will feature an Evening Concert and a set of two Concerts for children.

Known for his seven-volume novel À la recherche du temps perdu (In Search of Lost Time) that features countless references to composers before and of his time, much of the great French novelist Marcel Proust’s musical education took place at the Parisian music salon of Princesse de Polignac where avant-garde premieres of living French composers were heard.

With 2022 marking the 100th death anniversary of Proust, local concert violinist, founder and Artistic Director of CMAS – Tang Tee Khoon, intends to bring music connected with this salon to life, accompanied by the writings of Proust, in memory of his contributions and timeless work.

Tang said: “All forms of art are expressions by individuals in response to their experiences, and are hence very closely related to history. To truly see a time in history, it is crucial to study works of different art forms from that time and to discover the connection they share with one another.”

Featuring Italian pianist Luca Buratto and Tang Tee Khoon, the programme was designed in consultation with Paolo Di Leo, Senior Lecturer of Philosophy from the Singapore University of Technology and Design, who curated specific excerpts from Proust’s novel for live narration during the evening concert.

Charlotte Boulanger, a native French undergraduate reading history at the National University of Singapore (NUS) and Sciences Po, and Elmer Loh, a student reading biology at NUS and liberal arts at Waseda University, will be narrating the excerpts.

This merging of music and literature will bring audiences back in time to the Parisian salon, with a new rendition of pieces by Debussy, Fauré, Satie and Ravel.

On top of bringing the music salon to life, the concert features a secondary theme of war, with its middle works all written during the years of World War I (WWI). The owner of the salon, Princesse de Polignac, was also heavily involved in resistance efforts during the war, providing financial, medical and logistical support in the fight against the German troops.

Through these works, audiences can look forward to interpreting the responses of the French composers to the war, and attempt to identify ways in which the then environment influenced their art.

The theme of war extends into Friendships and War, the Concert for Children specially designed and curated for those ages six to 12 – when pieces Ravel and Debussy wrote for their peers during WWI will be shared. This time of learning and reflection will be led by CMAS’ engaging animateur who will bring young ones through activities and bite-sized musical excerpts – performed LIVE by the same power duo of Buratto and Tang.

For younger audiences aged six and below, their Concert for Children is built around Debussy’s Children’s Corner, a six-part piano suite written and dedicated to his three year old daughter.

In The Toys of Claude-Emma’s Playroom, children can look forward to greeting Claude-Emma’s toys – from an elephant, to a porcelain doll and a little shepherd. The unique characteristic of CMAS’ Concerts for Children is having classical music presented alongside interactive activities, colourful illustrations and fun stories for an enjoyable learning experience.

This upcoming project in April is the second of three LIVE projects presented by CMAS in 2022, with the next set of concerts continuing the same overall theme of The Salon of Princesse de Polignac but with more variations – featuring a cello, clarinet and more.

CMAS is also preparing other activities for the year, so do keep a lookout for more updates as the charity continues to work to bring timeless music and arts to different communities in Singapore, in a bid to reach and serve a wider range of beneficiaries. 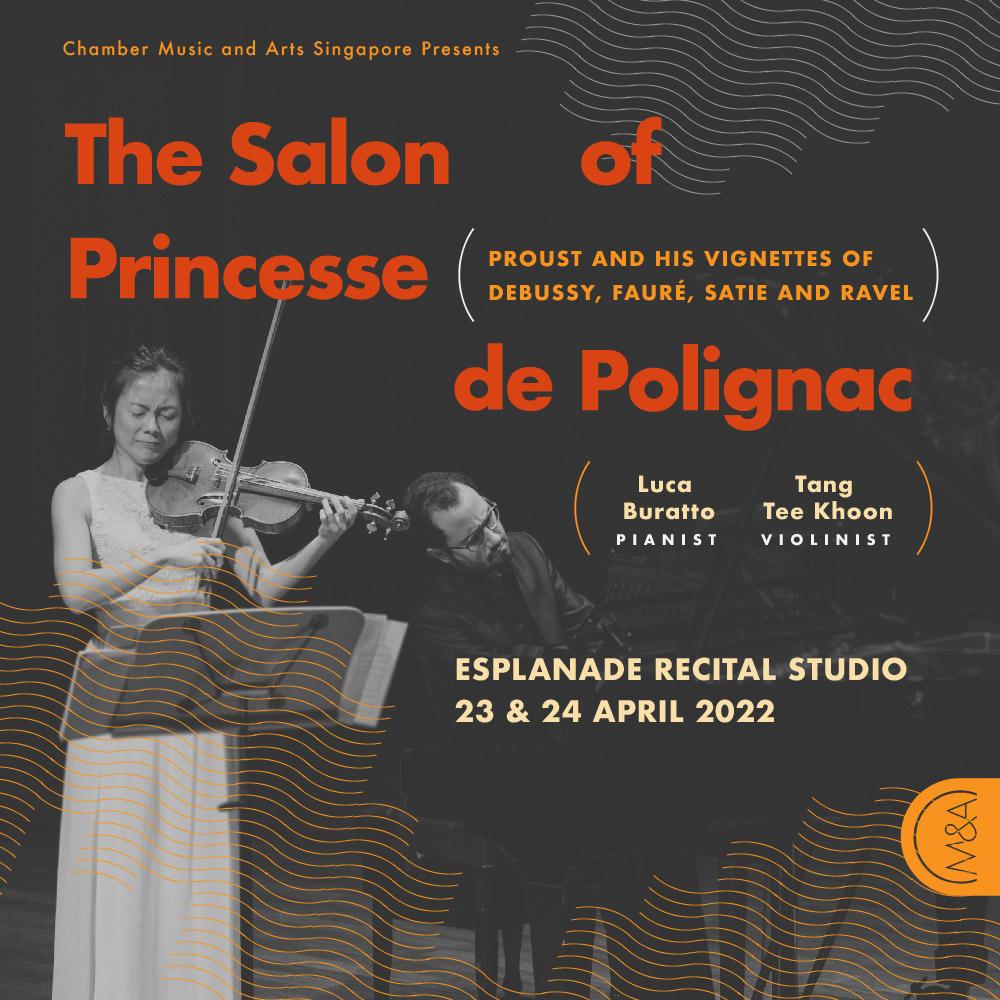 Chamber Music and Arts Singapore returns with The Salon of Princesse de Polignac ~ Proust and his vignettes of Debussy, Fauré, Satie and Ravel

2022 is the 100th death anniversary of the great French novelist Marcel Proust. Known for his seven-volume novel À la recherche du temps perdu (In Search of Lost Time) that features countless references to composers before and of his time – it was in fact at the Parisian music salon of Princesse de Polignac where avant-garde premieres of living French composers were heard – that much of Proust’s musical education took place.

Featuring Italian pianist Luca Buratto, Singaporean concert violinist Tang Tee Khoon, in close consultation with Paolo Di Leo, Senior Lecturer of Philosophy from the Singapore University of Technology and Design (SUTD), join us on this special one-night only reminiscence of this Parisian salon and its music that inspired Proust’s vignettes of Debussy, Fauré, Satie and Ravel in the most respected novel of the twentieth century. Priced between $32 and $82, ticket sales for the Evening Concert are now open here: https://sg.bookmyshow.com/e/CHAMBER1

Specially for young ones who are just starting out, CMAS’ Concerts for Children are tailored for a morning of fun and learning with CMAS’ engaging animateur and internationally-acclaimed classical chamber musicians. With two separate sessions for children ages six and below and ages six to 12, curious individuals can meet Claude-Emma’s toys through Debussy’s Children’s Corner, or join in a time of learning and reflection through Ravel’s and Debussy’s works written for their peers during the years of World War I. Tickets are priced between $28 and $32, and you can get your tickets here: https://www.chambermusicarts.com.sg/concerts/concerts-for-children/