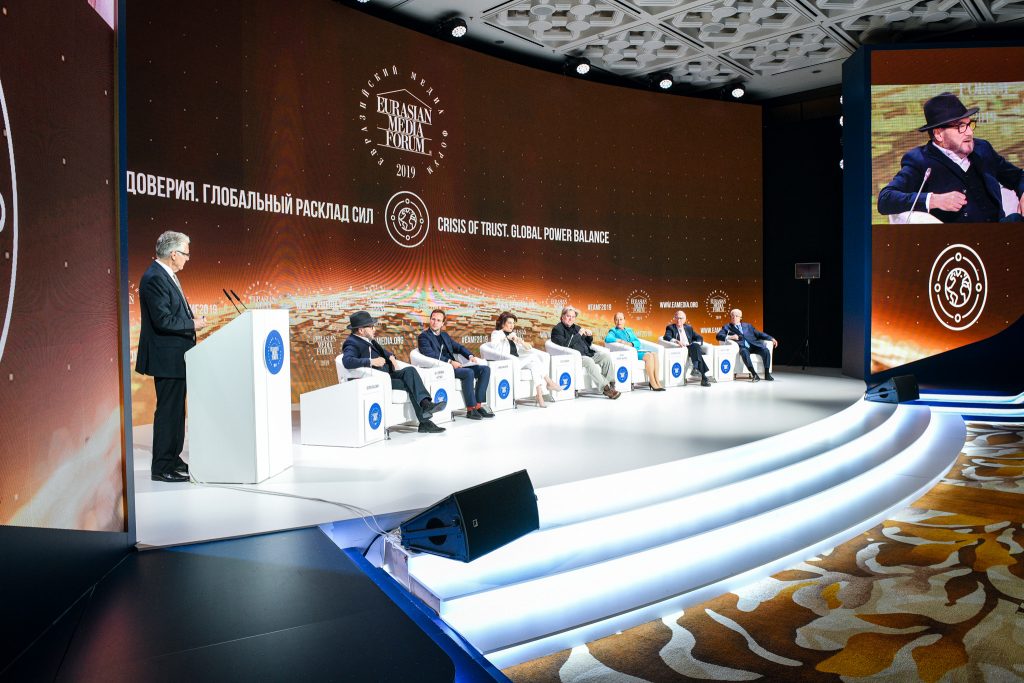 The most-lively session at the Eurasian Media Forum in Almaty, Kazakhstan, occurred on April 24 when panellists from East and West sparred verbally during a noisy debate over trust in international relations and national politics.

Moderator Stephen Cole (above, left), TV presenter from the United Kingdom, introduced the subject, Crisis of Trust: Global Power Balance, as a kind of Game of Thrones and asked the speakers about their thoughts on who will rule the new world.

“Has the legacy of consensus builders been replaced by risk takers?” he asked.

The seven panellists from Asia, Europe and the Middle East spent the next 90 minutes arguing about the future of the world and the lack of trust, which was seen as fuelling tensions at all levels.

More than 600 international experts and media from 50 countries were in Almaty for the three-day forum, which ended on May 24, to discuss a number of key issues, ranging from de-globalisation and consumption crisis to digital reality of mass media and the effects of artificial intelligence on journalism.

Cole kicked off the discussions by asking Steve Bannon (below), American political strategist and head of Donald Trump’s 2016 presidential campaign, whether President Trump had a strategic game plan to keep the United States as a superpower.

“Yes, he has a pretty clear plan,” Bannon replied, and went on to describe his view of how Trump was responding energetically to the challenge of changing global relationships, particularly with China, and its impact on national political trends in the western democracies.

The United States had tried to become an imperial power after the World War II, using a liberal rules-based order, comprising capital markets and trade arrangements and an American security guarantee, but had declined in international standing, he argued.

This policy has led to discontent among the working and middle classes who are now seeking change through populist movements. 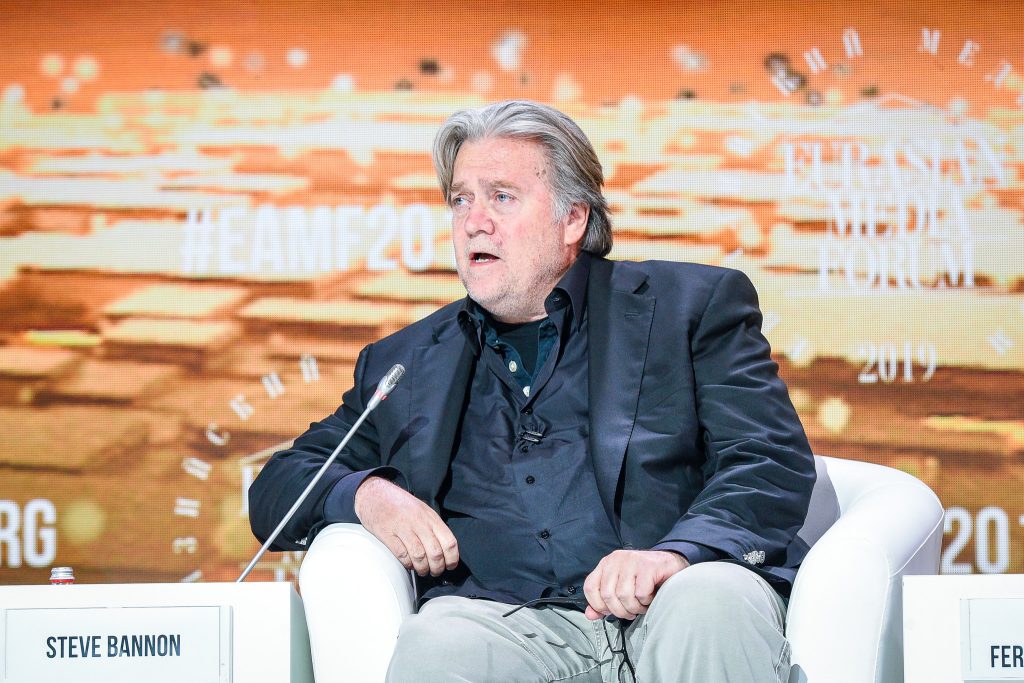 Bannon, who has been talking to politicians around Europe in the past months, predicted that the upcoming European parliamentary elections would see the beginning of a political restructuring which will benefit the working class and middle class all over the world.

Left-leaning George Galloway (below), British politician, broadcaster and writer agreed with Bannon that there is “a big sweep” going on in national politics around the world. 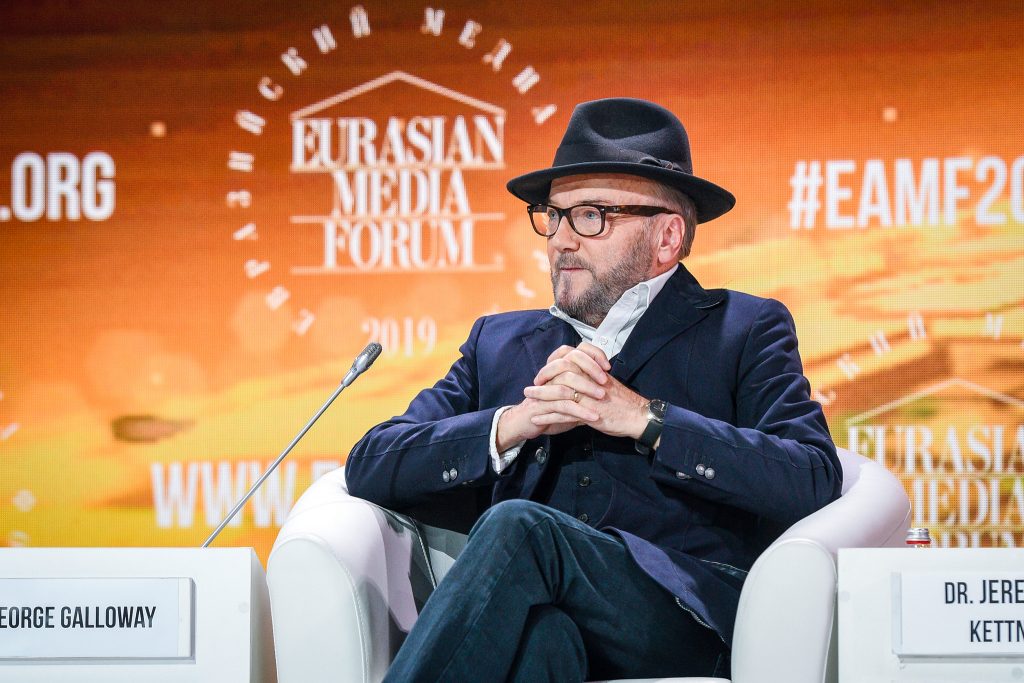 He said he and Bannon had many differences but they came from similar working-class backgrounds. “It’s our people who are asserting themselves.  The rules-based order, or whatever it’s called, is an era that is coming to an end. The era of the elite is done,” he declared.

Benita Ferrero-Waldner, President of Euroamerica Foundation, Austria, said the European Union was certainly in favour of maintaining the rules-based order. The alternative is the rule of the jungle, leading to all kinds of consequences, even war, she said.

Asked by the moderator whether “liberals” in the US and elsewhere should be worried by current trends, Mark Siegel, Head of the NYU Center for Global Affairs, said he believed there is a problem in the way traditional governments and parties viewed the situation. There are real underlying political and economic causes that all too often are dismissed.

“If the ethno-populists are successful, they will want to break down rather than build up,” he warned.

Armenia’s Anna Hakobyan (below, third from left), Editor-in-Chief, Haykakan Jamanek newspaper, argued that a rules-based order founded on mutual trust is the most important element in international relations, and mistrust is the most negative. Without trust, all kinds of conflict and tensions could develop, such as the current crisis between the US and Iran. Armenia has its own conflict with neighbouring Azerbaijan due to lack of trust.

She pointed to the Women for Peace movement, which she supports, as a potential means of building trust through the involvement of mothers and women generally.

Dr Jeremias Kettner (below, second from left), German analyst on global risks, said sports and cultural relations could also be really useful in bringing people of different nations together and developing trust.  “We need more empathy in the world.  We need to teach this to our children in our educational systems.  We need to look outside our bubble,” he said.

He added that in a multilateral world everyone had to work together to achieve results, for example on questions like climate change.  “These problems are too complex to solve alone,” he said. 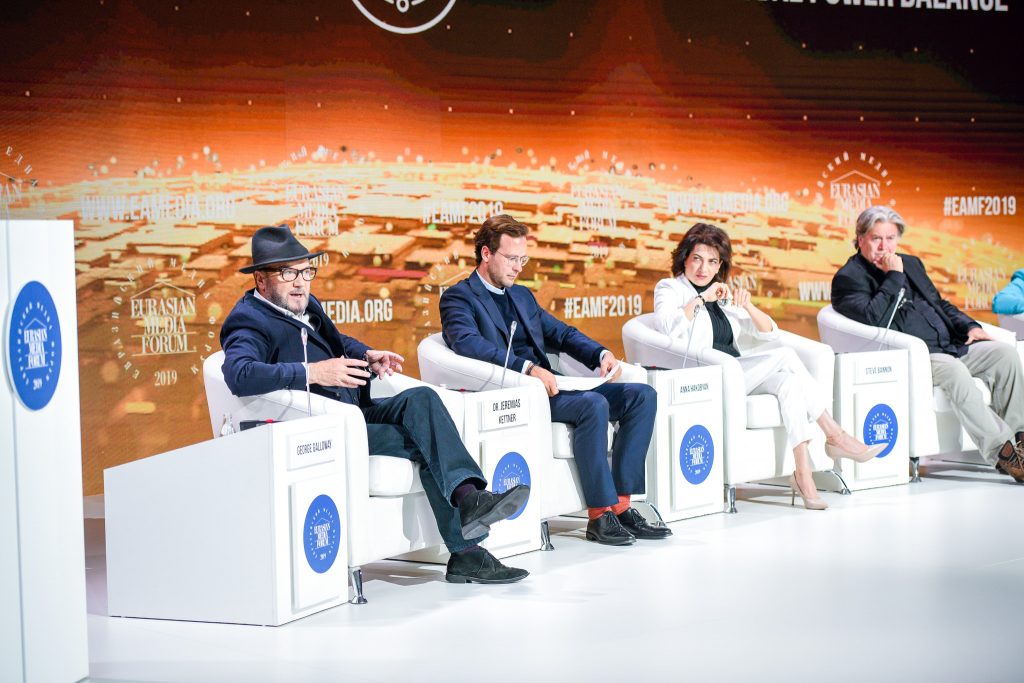 Cole then turned the debate to current sources of tension in the world, including US relations with China, Iran and North Korea.

Bannon responded by declaring that China posed a great existential threat to the US.

The problem in relations with China was that for the past 20 years the capital markets elites in Wall Street, the City of London and global corporations had cooperated with the Chinese authorities in running a scam, building up a Frankenstein monster that had gutted working class people in America, China and elsewhere, he pointed out.

“The working classes have been eviscerated.  There is no bond of trust, but nor should there be because these elites are not trustworthy. I’m working class and I know our people. They say they have had enough of this new serfdom. That time is over,” Bannon declared.

Siegel said China would soon be the world’s largest economy. Its military is not up to the US standard but it is improving its conventional forces, while the US is spending vast sums on a nuclear war that would never happen.

Mikhail Gusman, First Deputy Director of TASS, Russia, said relations between Russia and the United States goes much deeper than the question of who is sitting in the White House.

In the case of Trump, he said that US President had made many promises about improving relations with Russia but nothing happened.  “Making any assumptions is just impossible at this time,” Gusman said.

China is a special case for Russia, with its common border and interests, he said. “Building relations with China goes beyond trade. It is a more strategic problem.”

Benita Ferrero-Waldner agreed that China has not fulfilled its international obligations, such as giving subsidies to state-owned companies and stopping from stealing IP, but the EU’s approach is to solve these issues through negotiation, not by a trade war. Such tension could lead to military conflict, which must be avoided at all cost, she warned.

“We need stronger leaders in Europe and we need to make a lot of reforms. We have to be tough and clear, but no trade war.”

Galloway said the world had egregious trade policies because it suited the elites of the West.  “They don’t care if the workers’ lunch is stolen by China or anyone else, because they are sitting at a banquet.”

Prevailing orthodoxy says China is entitled as a sovereign country to pursue its own interests and policies, as is the US, but “the fearsome potential of a trade war becoming a real war is a clear and present danger.”

The American authorities must be aware that war with China would be disastrous, on the other hand they might be steaming towards a war with Iran that would be far worse than the war in Iraq.  “I call for cool heads,” he added.

Galloway and Bannon, after largely agreeing with each other on social issues, started vigorously accusing the European Union of failing to address the problems for many years.

As the tone of the debate became more heated, moderator Cole intervened to calm tempers and bring the session to a close.

In her final comments, Hakobyan said the fact that there was so little trust among the panellists was not a good sign for the future.