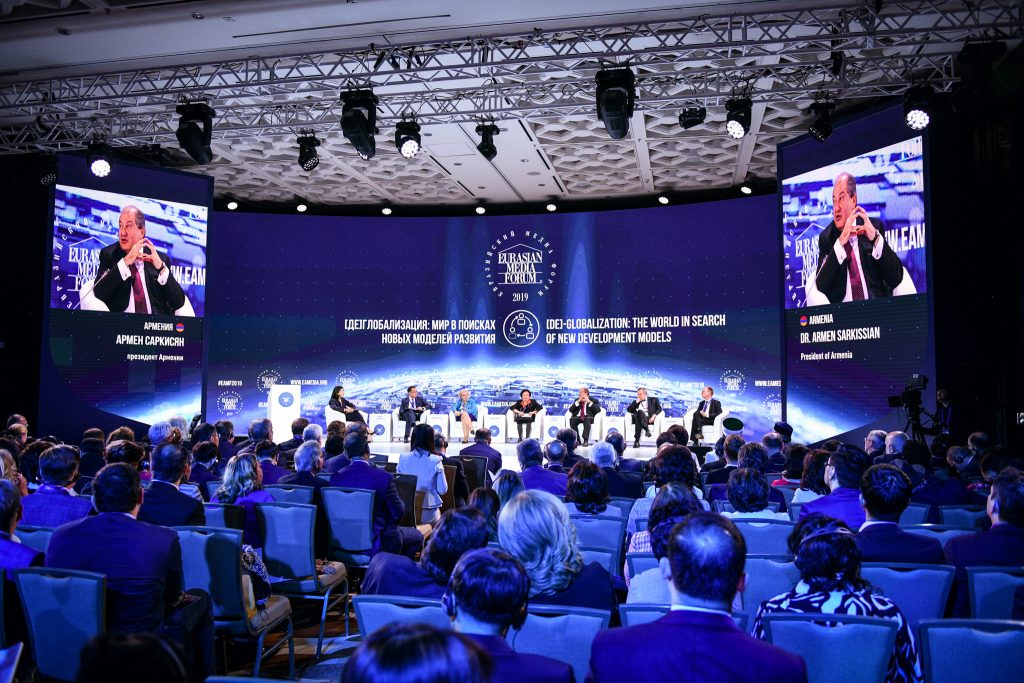 The importance of reviewing the impact of technology-driven change in the world was stressed at the opening of the 16th Eurasian Media Forum in Almaty, Kazakhstan, on May 23.

Kazakhstan President Kassym-Jomart Tokayev, who welcomed the 600 delegates, political leaders, journalists and experts from 50 countries to the three-day conference, which had the overall theme: “The World Today: Transforming Reality”, said that one of the major issues in the new digital reality was the concern felt in the international community about information leaks and other destructive influences of the Internet.

This new threat required some degree of authority, he warned.

He recalled that the Forum was established in 2002 in the “age of reflection” after the 9/11 terrorist attacks in New York and Washington.  He noted that it had continued its contribution to international dialogue through all the changes since then and wished the delegates further productive discussions.

The President’s message was read to the conference by Kazakhstan’s Minister of Information and Social Development Dauren Abayev, who described the Forum as a key, high-level event for the media of Kazakhstan and beyond.

The Eurasian Media Forum, launched in 2002, is an international discussion platform that focuses on important global issues. The annual forum brings opinion leaders together to discuss the global economy, politics, environment, culture and media. 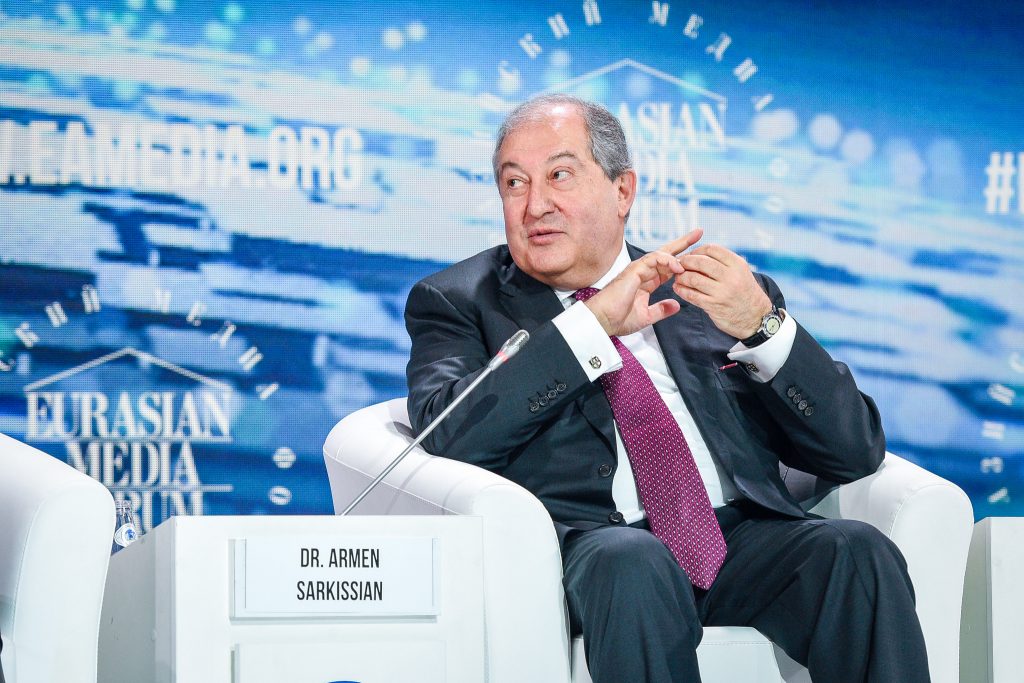 Armenia’s President Armen Sarkissian (above), one of the founders of the Forum along with Dr Dariga Nazarbayeva, Chair of the Senate of Kazakhstan’s Parliament, said he is proud to have made a small contribution to the creation of a wonderful institution that has been very influential, both in the international journalistic community and in the Eurasian geographical space.

“When we think about Eurasia, we think about Kazakhstan, because politically, economically and geographically, it is at the very heart,” said Mr Sarkissian.

“When the Forum started, it was a platform for traditional journalism. But now journalism is just a part of the virtual world in which every single one of us is spending hours every day. It is a part of our lives, this tool of the industrial revolution.

“We use this virtual world to keep in touch with family, share photographs and keep up with our financial affairs. Many use it for interests like sport. In fact more people watch football on electronic devices than go to the actual games. It has also completely changed the way people interact with politics and politicians, and when we talk about media, it is not the same media.”

“Kazakhstan has played an ambitious role in promoting Eurasian economic union and the Forum is one of the effective instruments in implementing that mission,” she said.

“The Forum exists to discuss the most acute problems facing the world, which in 2019 appears to be a global crisis of trust. True freedom of speech comes not just from listening to governments and large media organisations but alternative sources of information that are more important than ever before.”

Almaty’s Mayor Bauyrzhan Baibek, while welcoming the delegates, said the city had its own currency 800 years ago. He desceribed it as a “golden bridge” between East and West as well as the birth place of the apple.

Describing the growth of Almaty, Kazakhstan’s former capital and now its southern commercial hub, he said that international business and trade had grown to such an extent that the city’s GDP is now larger than that of some neighbouring countries. 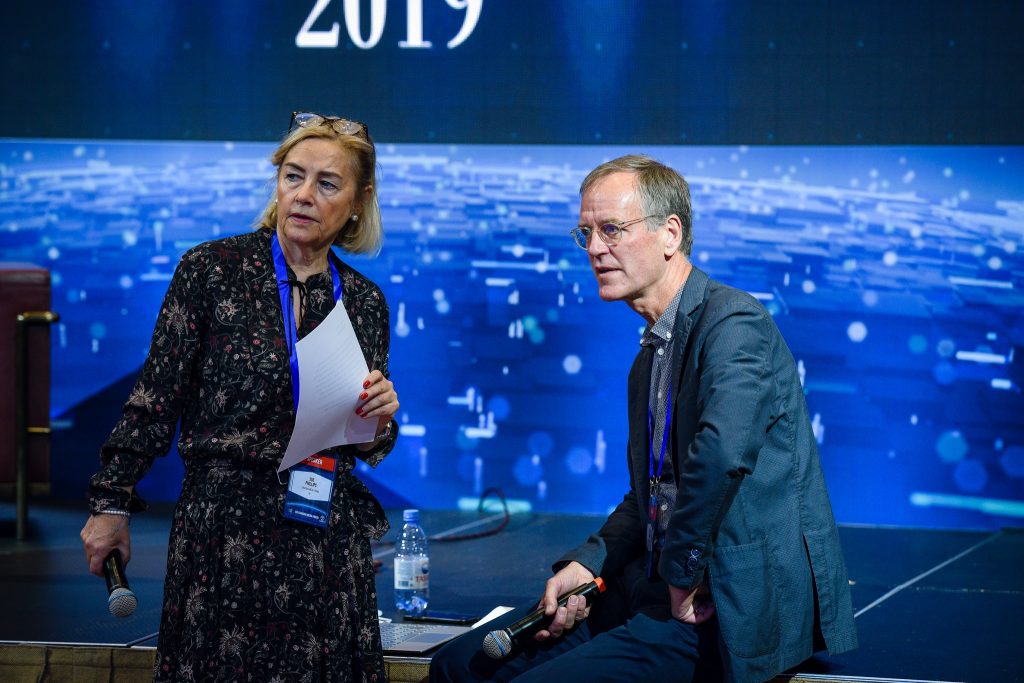 In addition to sessions and panel discussions, there were a series of master classes from international media experts. These includes training on environmental journalism, film producing, freelance journalism, news visualisation and mobile journalism. These thought-provoking classes offered good opportunities for the journalists who had gathered from different parts of the world to share their opinions and experiences.

The Eurasian Media Forum also provided a chance for Kazakhstan to communicate with the world and served as a platform for countries to better understand each other. 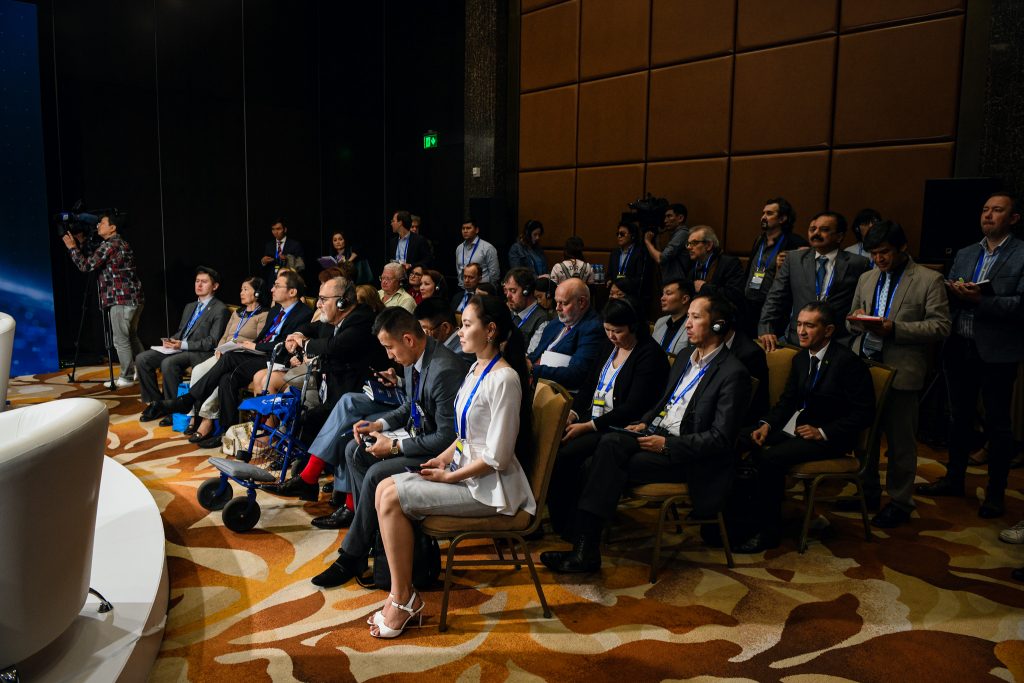 “We are interested to hear the opinions of people from different parts of the world on acute global issues,” said Dr Dariga Nazarbayeva, one of the founders of the Forum and chair of the organising committee. “We hope to bring together irreconcilable positions in an open dialogue, to promote mutual understanding and tolerance, to help unite efforts to solve common problems.”