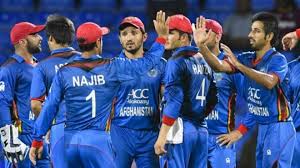 Afghanistan kept their hopes alive for a place in the ICC Cricket World Cup 2019 when they defeated the Windes by three wickets in a match of fluctuating fortunes, while defending champions Scotland went to the top of the Super Six points table by defeating the United Arab Emirates by 73 runs in the ICC Cricket World Cup Qualifier 2018 on Thursday (March 15) in Zimbabwe.

Mohammad Nabi became the first Afghanistan bowler to reach the 100-wicket milestone as the Asian side pinned the two-time former world champions against their four-pronged spin attack to restrict them to 197 for eight in 50 overs on a good batting surface in front of broadcast cameras at the Harare Sports Club.

They then recovered from 17 for two to 83 for three and finally 190 for seven before achieving the target for the loss of seven wickets with 14 balls to spare. Captain Jason Holder was the pick of his side’s bowlers when he finished with three for 39 and in the process became the fifth Windies all-rounder and 64th overall to complete the double of 1,000 runs and 100 wickets in ODIs.

At the Queens Sports Club, a career-best 114 by opener Matthew Cross and his 161-run second wicket partnership with Calum MacLeod (78) was the cornerstone of Scotland’s 73 runs victory over the UAE.

Zimbabwe and Ireland will go head to head on Friday at the Harare Sports Club in their first Super Six fixture. Zimbabwe will start with three points, while Ireland have two points.

Meanwhile in the Play-off Ranking matches, Nepal grabbed the final ODI spot until 2022 when they defeated Papua New Guinea (PNG) by six wickets to set up a seventh-eighth position play-off against the Netherlands, who defended a small total of 174 to beat Hong Kong by 44 runs.

Irrespective of the outcome of the Netherlands v Nepal match, Nepal have joined Scotland and the UAE as the three highest-ranked Associate Members after the Netherlands (who qualified last year for the new 13-team ODI League commencing in 2020 by winning the ICC World Cricket League Championship), which was the criteria to earn ODI status for the next four years.

In contrast, Hong Kong and PNG will be relegated to the ICC World Cricket League Division 2, but not before featuring in the 4,000th ODI, which will be played at the Old Hararians on Saturday.

The feature of Afghanistan’s win over the Windies, which gave them a 2-1 lead in four head-to-head matches, was their four-pronged spin attack that included wrist-spinner Rashid Khan, off-spinners Mohammad Nabi and Mujeeb Rahman, and left-arm spinner Sharafuddin Ashraf. The slow bowlers bowled 39 overs between them in which they conceded 138 runs and snapped up seven wickets.

Mujeeb was the most successful bowler with three for 33, while Nabi bagged two for 43, including the wicket of Marlon Samuels for his 100th ODI scalp. The slow bowlers were well supported by some outstanding fielding in the deep as the Windies batsmen tried to break the shackles but only managed to find the alert Afghanistan fielders.

Shai Hope was the top scorer with 43, while his 50-run fifth wicket partnership with Jason Holder (28) was the highest of the Windies’ innings.

Afghanistan, in turn, were wobbling at 17 for two but Rehmat Shah (68) first rebuilt the innings with Samiullah Shenwari (27) and then with Nabi (31). But Nabi’s departure created some panic in the Afghanistan camp as they slipped to 168 for six in the 44th over, but Rashid Khan ensured victory with three wickets for 14 balls to spare by scoring 13 invaluable runs.

It was a one-way traffic at the Queens Sports Club after Scotland scored 322 for six and then dismissed the UAE for 249 in 49.4 overs with fast bowler Chris Sole taking four for 68.

The highlight of Scotland’s innings was a second career century by Cross in his 40th ODI. The 25-year-old wicketkeeper-batsman scored 114 from 135 balls with five fours and four sixes, adding 161 runs for the second wicket with MacLeod, whose 79-ball 78 included eight fours and a six.

The only positive for the UAE was their captain Rohan Mustafa’s continued good form with the ball, when he finished with four for 56.

Dipendra Airee was Nepal’s star performer when the off-spinner took four for 14 to spin PNG out 114 in 27.2 overs, and then scored an unbeaten 50 after his side had slipped to 35 for three. Sandeep Lamichhane was another one to produce an impressive effort, grabbing four for 29.

In the Netherlands v Hong Kong match, the Dutch lost their last seven wickets for 29 runs to be dismissed for 174 in 48.2 overs. However, the target proved to be too stiff for Hong Kong who were bowled out for 130 in 43 overs with Roelof van der Merwe finishing with four for 18.

Fixtures for Friday and Saturday (Games involving the Netherlands and Nepal will be classified as List-A matches as the two sides don’t have ODI status coming into this tournament):

Play-off ranking matches
*  In the event of a play-off ranking match being tied the teams shall compete in a Super Over to determine the winner.
*  If following a tie, weather conditions prevent the Super Over from being completed, or if the match is a no result or abandoned, the progression or order of finishing will be determined by the team’s performances in the Group stage as follows: Group standing, most points, most wins, highest net run rate. If still equal, any teams that cannot be separated in this way shall be placed according to their original Group seeding.

There are no reserve days and there is no Super Over in the Super Six stage.