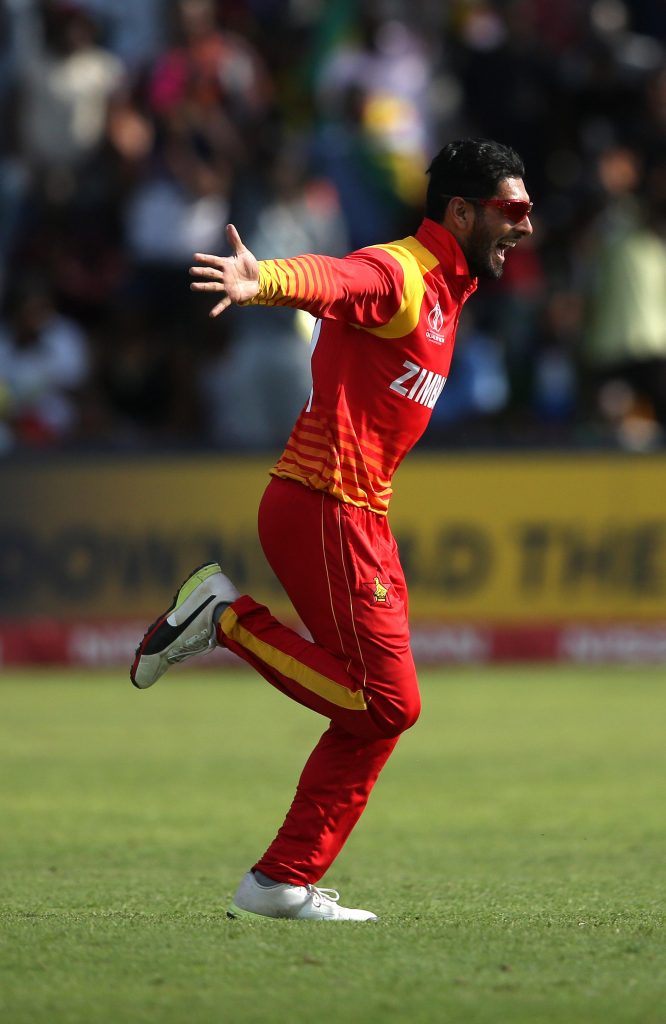 Zimbabwe came back from behind to beat Ireland by 107 runs in a Super Six fixture of the ICC Cricket World Cup Qualifier 2018 at the Harare Sports Club in Zimbabwe on Friday (March 16).

In front of 7,500 noisy and celebrating spectators, Zimbabwe looked dead and buried when they slipped to 139 for seven in the 34th over after being sent into bat, before Sikandar Raza’s undefeated 69 lifted them to 211 for nine.

Left-arm spinner Tendai Chisoro then followed up his 21 with the bat to pick up three frontline batsmen as Ireland slipped to 54 for five, before Graeme Cremer ran through the middle and lower-order with three for 18 as the 2009 qualifier champions were dismissed for 104.

The victory helped Zimbabwe join Scotland on five points and ahead in first place on net run-rate, while Ireland were left with two points in fourth position.

Both sides have two matches remaining, with Zimbabwe to square off against the Windies and the United Arab Emirates on 19 and 22 March, respectively, while Ireland have tricky matches against Scotland and Afghanistan on 18 and 23 March, respectively.

The top two sides from this tournament will qualify for the ICC Cricket World Cup 2019, which will be held in England and Wales from 30 May to 14 July.

A delighted Zimbabwe captain Graeme Cremer said: “Very happy, we knew we had a score to defend, but the bowling and fielding were outstanding. We could not have asked for anything better.

“Physiologically, getting over 200 we knew it was going to be hard for them to chase, especially if we bowled well. Chisoro opening up as spinner is never easy, but for him to get three and for the rest of the bowlers to step up was amazing.

“It was a match-winning knock from Sikander Raza, he’s done it time and time again for us. The way he stuck it out and batted out for us until the end was excellent and credit to him, definitely my man of the match.”

William Porterfield was a disappointed Ireland captain. He said: “It has been a game of two halves really, if you give us 212 to chase on that pitch you would be pretty happy. We were confident at half-time, but then never really got going.

“It’s hard to put your finger on what happened there, it’s pretty disappointing to get bowled out on that pitch. I think we gifted them early on and put us on the back foot. Stirlo (Paul Stirling) played pretty well, but then he just lost his partners at the other end, and I obviously started that off. We have to pick ourselves up and get a result on Sunday now.”

Zimbabwe made a promising start when opener Cephas Zhuwao hit the second ball of the match from Tim Murtagh over the bowler’s head for a six and belted another one eight balls later over mid-wicket to race to 20.

However, Zhuwao tried one shot too many against Barry McCarthy to be caught at mid-on, which started a procession of wickets.

Solomon Mire (11) was stumped by Niall O’Brien, Hamilton Mazakadza (18) was caught at the wicket while fishing outside the off stump, Sean Williams (9) miscued a sweep to be caught at square leg, Brendan Taylor (25) tried an expensive reserve sweep to be trapped in front of the wickets, Craig Ervine (20) paid the price for a slight hesitation to be run-out, before Greame Cremer’s off stump was sent on a walk by Kevin O’Brien as Sikandar Raza watched batsmen come and go.

At 139 for seven, Raza was joined by Chisoro and the two batsmen added 42 runs for the eighth wicket with Chisoro contributing 21. After Chisoro departed at the score of 181 with 31 balls of the allocation still remaining, Raza took control of the proceedings to carry his side to 211 for nine.

Raza returned unbeaten on 69, his seventh career ODI half-century, which came off 83 balls and included four fours and three sixes.

For Ireland, all the bowlers bowled exceedingly well, but Murtagh emerged as the most successful with three for 36, while off-spinner McBrine bagged two for 42.

Ireland made the worst possible start when Chisoro sent back William Porterfield (caught at short mid-wicket), Ed Joyce (stumped down the leg side) and Niall O’Brien (caught at short fine-leg), with Kyle Jarvis picking up Andrew Balbirinie at the wicket and Kevin O’Brien caught in the slips off Sean Williams as Ireland looked down the barrel at 54 for five.

Paul Stirling and Gary Wilson took the score to 86 before a terrible mix-up ended the innings of Stirling (41) and seven balls later Wilson was adjudged leg before to Cremer as Ireland plunged to deeper crisis at 89 for seven in the 29th over.

Ireland’s poor batting display, which they have just one day to forget before they take on Scotland on Sunday, ended at the score of 104 when Mazakadza took an excellent running catch in the deep to dismiss Murtagh off Cremer.

Raza, adjudged Player of the Match, said: “We have a realistic chance now to qualify. I think a lot of people wrote us off after the bad series in Sharjah, but we never wrote ourselves out us we looked at each other and knew we had underperformed and underachieved in the last few tours.

“Coming back home for the qualifiers, we genuinely believed we had a chance, and to be here with five points proves we have more than a good chance to qualify and go to England and Wales next year.”

Fixtures for Saturday and Sunday (Games involving the Netherlands and Nepal will be classified as List-A matches as the two sides don’t have ODI status coming into this tournament):

Play-off ranking matches
*  In the event of a play-off ranking match being tied the teams shall compete in a Super Over to determine the winner.
* If following a tie, weather conditions prevent the Super Over from being completed, or if the match is a no result or abandoned, the progression or order of finishing will be determined by the team’s performances in the Group stage as follows: Group standing, most points, most wins, highest net run rate. If still equal, any teams that cannot be separated in this way shall be placed according to their original Group seeding.

There are no reserve days and there is no Super Over in the Super Six stage.