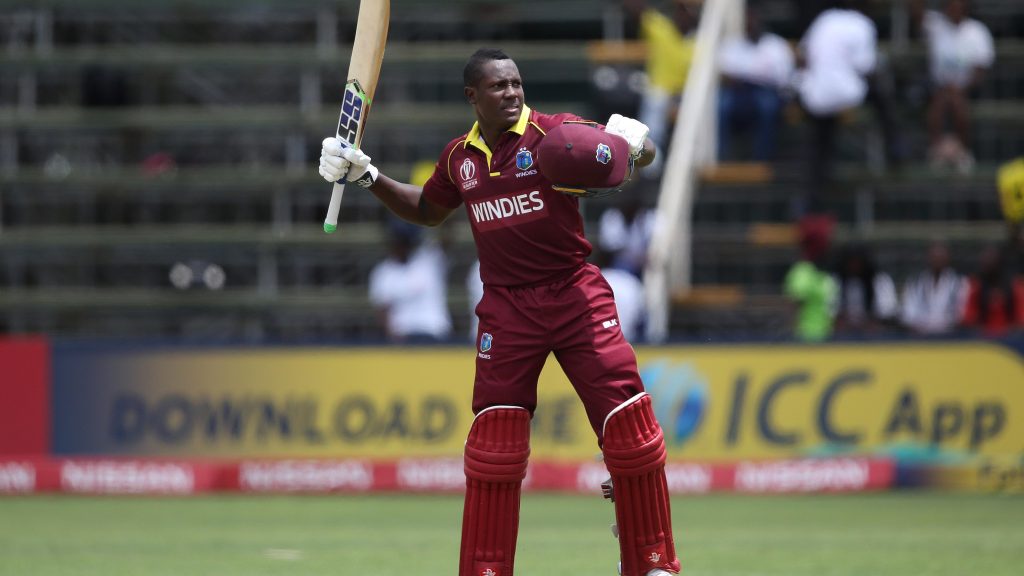 An eye-catching maiden century by Rovman Powell steered the Windies into the Super Six of the ICC Cricket World Cup Qualifier 2018 in Zimbabwe with a convincing 52 runs victory over Ireland in a Group A match on March 10, while Zimbabwe also maintained their unbeaten run in Group B and progressed to the next stage with an 89 runs victory over Hong Kong.

In front of broadcast cameras and nearly 2,000 spectators at the Harare Sports Club, Powell scored a dazzling less than run-a-ball 101 with seven fours and as many sixes to lift the Windies from 83 for five to 257 for eight. He featured in an 86-run sixth-wicket partnership with captain Jason Holder, who hit three fours and a six in a 71-ball 54.

Fast bowler Tim Murtagh was the pick of the Ireland bowlers with figures of 10-2-41-4, while Andy McBrine picked up two for 45.

Windies fast bowler Kemar Roach then picked up two early wickets of Paul Stirling (18) and Andrew Balbirnie (9) and then returned to dismiss the dangerous looking Ed Joyce (63, 86b, 7×4) and Kevin O’Brien (38) in a space of four deliveries to finish will figures of 10-3-27-4 as Ireland slipped from 166-4 to 205 all out in 46.2 overs. Kesrick Williams too did his part as he got rid of the lower-order batsmen, taking four for 43 in 8.2 overs.

In the other Group A fixture at the Old Hararians, the Netherlands kept their chances alive for a place in the Super Six when they defeated Papua New Guinea by 57 runs in their first-ever meeting. Roelof van der Merwe starred in the Dutch victory when he contributed 33 in his side’s 216 for eight and then returned figures of 10-0-46-4 as PNG were dismissed for 159 in 42.1 overs.

This result means Monday’s (March 12) matches between the Netherlands and the Windies and Ireland and the United Arab Emirates will decide which two sides will join the two-time former world champions in the Super Six.

In a Group B match at the Queens Sports Club, Hamilton Mazakadza scored a 110-ball 84 with seven fours and a six, Brendan Taylor hit four fours in a 51-ball 46 and a 25-ball cameo by opener Cephas Zhuwao, which included six fours and three sixes, propelled Zimbabwe to an imposing 263 for nine.

Hong Kong’s Anshuman Rath fought a lone battle scoring 85 but wickets continued to fall at the other end until the Asian side were bowled out for 174 in 46.5 overs. Sikandar Raza was the most successful bowler with three for 30, while Kyle Jarvis, Graeme Cremer and Sean Williams took two wickets apiece.

Zimbabwe will now take on defending champions Scotland on Monday (March 12) and the winners of the match will take four points into the Super Six, while the loser will go through with two points.

Hong Kong’s defeat also gave a lifeline to Afghanistan, who defeated Nepal by six wickets after Mohammad Nabi took four for 33 and then scored 34 in their last group match. They will now await the result of the Hong Kong versus Nepal match to know their fate.

A Hong Kong win will put them into the Super Six ahead of Afghanistan on points.