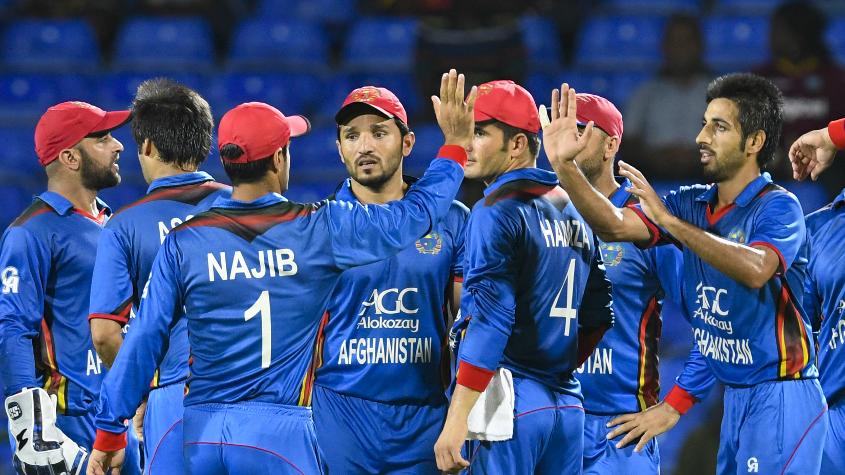 Afghanistan’s dreams of qualifying for the second successive ICC Cricket World Cup were left hanging by a thread on March 8 when Hong Kong defeated them by 30 runs on the Duckworth-Lewis-Stern Method in a Group B fixture of the ICC Cricket World Cup Qualifier 2018 in Harare, while defending champions Scotland became the first side to progress to the Super Six after notching up their third successive victory in Bulawayo.

Elsewhere in Zimbabwe, the Windies were given a run for their money before beating Papua New Guinea by six wickets and the United Arab Emirates won their second match in three outings when they handed the Netherlands their second successive defeat.

After batsmen-dominated proceedings on Tuesday with as many as five centuries and five half-centuries, honours were shared on Thursday. The Windies fast bowler Carlos Braithwaite returned career-best figures of 10-2-27-5 and captain Jason Holder scored 99 not out against PNG, while the UAE captain Rohan Mustafa recorded figures of 9.3-2-26-5 with his off-spinners which was followed by a classy 78 not out by Chirag Suri against the Netherlands. Coetzer hit a match-winning 88 not out against Nepal and Hong Kong off-spinner Ehsan Khan took four for 33 against Afghanistan.

Afghanistan, chasing 242 for victory, were 167 for seven when rain stopped play and resulted in a loss of four overs. The target was revised to 226 runs in 46 overs, but it proved too much for the lower-order which managed only 28 runs as Afghanistan finished at 195 for nine.

The victory means that, if Hong Kong now win their next game against Zimbabwe and Nepal lose to Afghanistan, Hong Kong will be guaranteed a spot in the Super Six ahead of Afghanistan. If this doesn’t happen on Saturday, Hong Kong can qualify for the Super Six if they defeat Nepal on Monday. This is because Hong Kong have a win and a loss after two matches, while Afghanistan are winless from three matches.

In contrast, Afghanistan have an outside chance to qualify for Super Six. For this to happen, they will have to beat Nepal on Saturday and Hong Kong will have to lose both their matches on Saturday and Monday. In this scenario, net run-rate will decide which side will go through as both Hong Kong and Afghanistan would end on equal wins and points.

Afghanistan are themselves to blame for Thursday’s defeat. They first let Hong Kong off the hook when they allowed them to reach 241 for eight in 50 overs after having reduced them to 43 for three and then 93 for four. Then, in their target chase, they slipped from 26 for no loss to 73 for four and then played too many dot-balls to be at 167 for seven in 43 overs at the rain-break before finishing at 195 for nine.

Off-spinner Ehsan Khan of Hong Kong was the wrecker-in-chief of Afghanistan’s innings when he recorded figures of 9-0-33-4, while Nadeem Ahmed picked up two for 37. Dawlat Zadran, batting at No. 9, was the top scorer for Afghanistan with 40 not out.

Earlier, Hong Kong’s left-handed batsman Anshuman Rath scored a fighting 65 off 90 balls with six fours and six, and added 50 runs for the fourth wicket with Nizakat Khan (28) and 67 runs for the fifth wicket with captain Babar Hayat (31). No.11 batsman Tanwir Afzal provided the late impetus to the innings by slapping three fours and a six in a nine-ball 22.

This was Hong Kong’s first victory over Afghanistan in two ODIs. Afghanistan had won the previous encounter in May 2014 by six wickets.

Meanwhile, Scotland became the first side to qualify for the Super Six after Stuart Whittingham (three for 35), Safyaan Sharif (two for 21) and Alasdair Evans (two for 24) shared wickets between them to dismiss Nepal for 149 in 47.4 overs at the Queens Sports Club.

Captain Kyle Coetzer then single-handedly steered his side home in 41.3 overs by scoring an unbeaten 88 off 136 balls with seven fours and three sixes. He was later named the player of the match.

Scotland’s last league match is against Zimbabwe at the Queens Sports Club on Monday, 12 March, and irrespective of how that match pans out, they are guaranteed to take at least two points into the Super Six. A win over Zimbabwe will mean they will carry four points with them to the next stage.

In the Super Six stage, Scotland will play the top three sides from Group A which will be from the Windies, Ireland, the Netherlands and the United Arab Emirates. Papua New Guinea (PNG), the other side in Group A, are now out of the Super Six race after suffering their third straight defeat and in danger of losing their ODI status at the end of the tournament.

Fast bowler Whittingham later said: “This is my first game in the tournament, so it was nice to strike early and continue that going forward. We have gone really well bowling first so far, we were happy to bowl and chase. There was definitely a lot of swing early on and as the game progressed, the pitch got slower and slower and seemed to die a little bit, it was taking spin very well.

“Coetzer is a class player, it was only a matter of time before he got a big score. Hopefully he can kick off from here and keep going. We will take it game by game, that’s how we have gone well so far. We have a big game against Zimbabwe, we are looking to rest up for a couple of days and then go full steam.”

At the Old Hararians, the Windies’ decision to rest Chris Gayle against PNG almost backfired when they were reduced to 58 for four in pursuit of a 201-run victory target. But, captain Jason Holder came to his side’s rescue when he struck an unbeaten 99 off 101 balls with nine fours and four sixes, and added 143 runs for the unfinished fifth wicket with Shai Hope (49 not out) to avert one of the biggest upsets in the history of ODI cricket.

Rohan Mustafa and Chirag Suri scripted a famous win for the UAE over the Netherlands when the former took five for 26 with the ball and the latter scored 78 not out with seven fours and a six as the ICC World Cricket League Division winners achieved the 177-run target in 44 overs for the loss of four wickets.

A delighted Suri said: “I think it was a very, very invaluable win for us. We know the magnitude of this win, so I am really, really happy I could contribute to the winning performance.

“Whenever you get the opportunity, you want to cement your place in the side. Once you do that, you can play with more confidence and play your natural game. I’m glad I got this opportunity. Thanks to the selectors and the coaches.”

Scores in brief (matches involving the Netherlands and Nepal will be classified as List-A matches as the two sides don’t have ODI status coming into this tournament):

Fixtures for March 10 (Saturday)
Matches start 09h30 local time; matches involving the Netherlands and Nepal will be classified as List-A matches as the two sides don’t have ODI status coming into this tournament