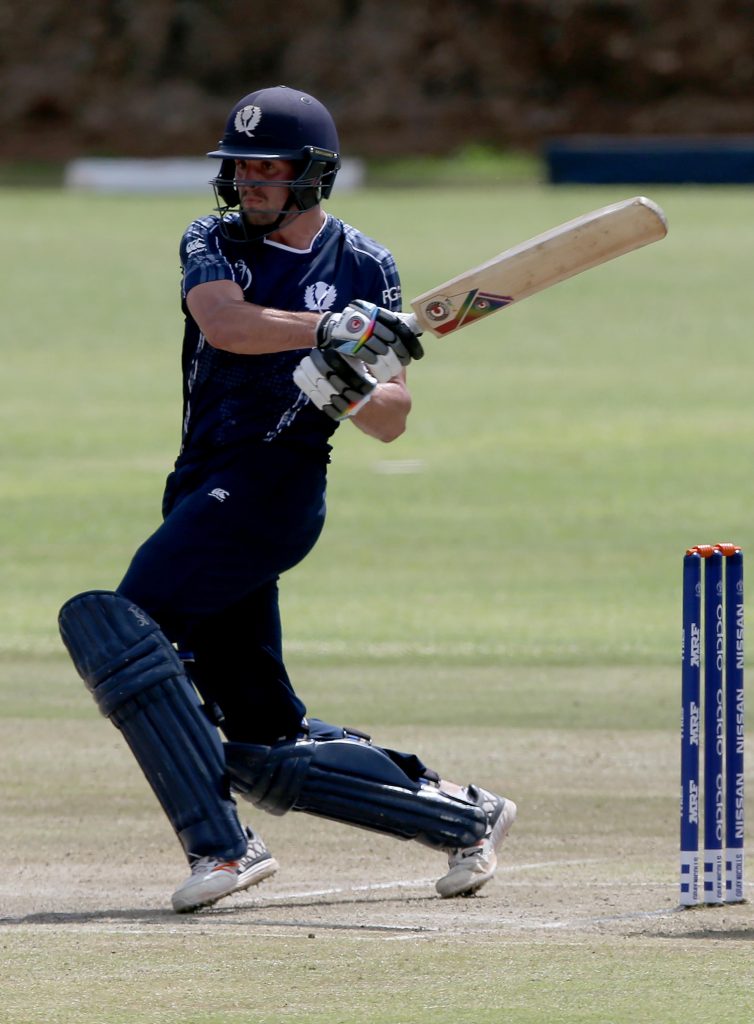 A 208-run third wicket partnership between Calum MacLeod and Richie Berrington helped defending champions Scotland surprise Afghanistan by seven wickets in a Group B fixture of the ICC Cricket World Cup Qualifier 2018 at the Bulawayo Athletic Club on Sunday (March 4.

MacLeod scored an unbeaten 157, his sixth century in 51 ODIs, and Berrington followed up his three for 42 with a watchful 67 as Scotland ruined Rashid Khan’s debut as Afghanistan captain at 19 years and 165 days when they achieved the 256-run target with 16 balls and seven wickets to spare.

Elsewhere, veterans Sikandar Raza and Brendan Taylor gave Nepal a cricket lesson when they scored entertaining centuries in Zimbabwe’s 116 runs victory in another Group B fixture in front of almost 2,500 spectators at the Harare Sports Club.

In the feature match of the day, Scotland produced a clinical performance to upset Afghanistan.

Chasing 256 for victory, Scotland were in some bother at 21 for two, but a 208-run third wicket partnership in nearly 37 overs between player of the match MacLeod and Berrington sealed the match in Scotland’s favour. This was only the second victory for Scotland over Afghanistan in 12 ODIs.

The architects of Scotland’s victory were MacLeod and Berrington. MacLeod’s 157 not out came from 146 balls and included 23 fours and a six, while Berrington hit four fours in a 95-ball 67.

Scotland skipper Kyle Coetzer lauded MacLeod and Berrington while also crediting other members for the effort.

“The standout (performance) for us today is MacLeod. It was an unbelievable effort from him. Earlier, the bowlers did their job, the spinners were effective in their short spells. We took wickets continuously and that was the key to our day. Richie ended with three wickets and some 70 runs, was brilliant in the field, his standards never drop.

“It’s a great start to the tournament but we will take every day as it comes. We need to pick ourselves again and get ready and raring to go against Hong Kong,” he said.

The result spoilt Rashid Khan’s day, who became the world’s first teenager at 19 years and 165 days to captain a men’s international side and the youngest player ever, male or female, to captain in a full international match. He beat the record of Arran Thompson, who had captained England against Scotland in a women’s ODI in August 2001 at Reading aged 19 years and 260 days.

Earlier in the day, Mohammad Nabi fell victim to the nervous 90s when he was run-out for 92 as Afghanistan recovered from 71 for four to 255 all out in 49.4 overs. The all-rounder struck nine fours and three sixes in an 82-ball 92, while Najibullah Zadran, who was the other batsman when Nabi was run-out, finished with 67 from 69 balls with six fours and two sixes.

The two batsmen added 149 runs for the fourth wicket, but once the partnership was broken at the score of 220 in the 42nd over, the remaining batsmen failed to offer any resistance as Afghanistan lost their last six wickets for 35 runs in 8.2 overs.

Brad Wheal (three for 36), Berrington (three for 42) and Safyaan Sharif (two for 46) bowled excellently and ensured Afghanistan didn’t bat them out of the game.

Put in to bat, Ireland scored 268 for seven in their allotted 50 overs. All the top order batsmen got decent starts but only Andrew Balbirnie was able to cross the 50-run mark, scoring 68 from 75 balls with four fours and one six.

Wicketkeeper-batsman Niall O’Brien (49), opener William Porterfield (47) and one-down batsman Ed Joyce (32) were the other notable run-getters, while the 101-run fourth wicket partnership between Balbirnie and O’Brien was the biggest of the Irish innings.

For the Netherlands, fast bowler Timm van der Gugten was the most successful bowler with three for 59 even as Ireland collected 76 runs in the last 10 overs for the loss of four wickets.

Chasing a revised target of 243 runs in 41 overs, the Netherlands started poorly when they lost Maxwell O’Dowd on the third delivery of the opening over and then continued to lose wickets at regular intervals until they were bowled out for 149 to fall short by 93 runs.

Tim Murtagh, who started the riot when he dismissed O’Dowd, was the pick of the Ireland bowlers when he finished with three for 28, while Boyd Rankin and Barry McCarthy took two wickets apiece. For the Netherlands, van der Gugten (33), Scott Edwards (26) and Ryan ten Doeschate (21) were the notable contributors.

The United Arab Emirates scored a comfortable 56 runs victory under the DLS method.

Fast bowler Mohammad Naveed finished with career-best figures of five for 28 and leg-spinner Imran Haider took two for 21 as PNG were skittled out for 113 in 25.5 overs in their chase of a revised target of 170 in 28 overs.

Charles Amini (24) and Norman Vanua (20) were the main contributors to PNG’s score but could not take the team anywhere close to the target.

Rohan hit a 136-ball 95 with four fours and as many sixes, while Ashfaq’s 56-ball 50 included five fours and a six. However, the middle and lower-order batsmen failed to cash in on an impressive 91-run opening start in I8 overs as they lost all their wickets in the next 31 overs for 130.

The bowler to put the brakes on the UAE scoring was 24-year-old fast bowler Norman Vanua, who recorded career-best figures of 9.4-1-39-4. He was well assisted by his new-ball partner Alei Nao, who snapped up two for 42.

Punishing centuries by Sikandar Raza and Brendan Taylor helped host nation Zimbabwe to post a colossal 380 for six in 50 overs, which proved too much for the opposition.

Raza belted nine sixes and seven fours in a 66-ball 123 and Taylor hit seven fours and a six in a 91-ball 100 as the two batsmen put on 173 runs for the third wicket in nearly 17 overs. Both the batsmen fell on successive deliveries of the penultimate over to fast bowler Sompal Kami, who finished with figures of two for 82. Left-arm spinner Basant Regmi bagged two for 69.

Openers Solomon Mire and Cephas Zhuwao had earlier provided the launching pad when they put on 77 runs in seven overs. Zhuwao slapped three fours and four sixes in a 23-ball 41, while Mire’s 41-ball 52 was laced with five fours and three sixes.

In reply, Nepal scored 264 for eight in 50 overs. Sharad Vesawkar (52), Aarif Sheikh (50) and Paras Khadka (40) all got going, but could not stitch the kind of huge partnerships that were needed if they had to give a good chase and the writing was on the wall midway into the innings.