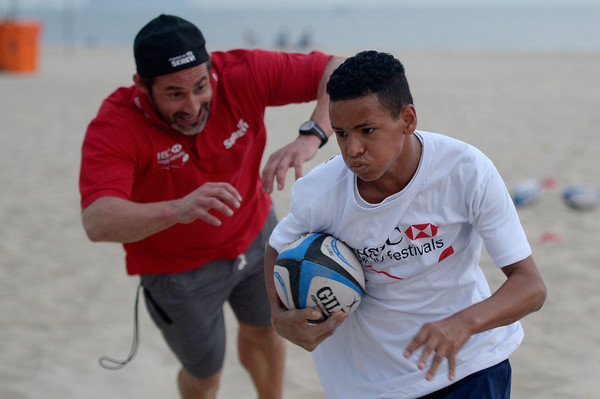 Gollings and Forbes lit up rugby pitches across the world during their illustrious careers and played their parts in widening the popularity of sevens rugby, helping to usher the code into a new era of global popularity as an Olympic sport.

Nearly seven years after retiring from the Sevens game, former England skipper Gollings still holds the World Rugby Sevens Series record for most points scored. His 2,652 points came from playing 344 matches over 70 tournaments and include 220 tries.

The 37-year-old former flyhalf is excited to be returning to the Lion city, saying: “I had a great time working with the Singapore national sevens team in their SEA Games medal quest last year and am delighted with this opportunity to build on that.

“Singapore’s continual effort to spread the gospel of rugby is commendable and there is so much potential for sevens in this region. I want to play my part in helping to make the HSBC Singapore Rugby Sevens a success.”

A renowned sevens rugby ironman, Forbes, World Rugby’s Sevens Player of the Year in 2008, cuts a popular figure with rugby fans across the world, scoring more than 150 tries in a record 512 World Series games over 89 World Series tournaments.

Distinctive by his shaved head and bushy beard, the 35-year-old former World Cup winner and 2-time Commonwealth Games medallist is busy carving out his next career as a coach, following his retirement from playing last year.

Said Forbes: “Sevens is one of the fastest growing team sports in the world and the HSBC World Rugby Sevens Series is a perfect showcase for the stars and budding talents.

“Coming from a Samoan heritage, where family occupies a big part of daily life, I’m delighted with Singapore’s push to make the HSBC Singapore Rugby Sevens a family-friendly event.

“This has been a year of new things for me following my retirement last year and this is yet another new role for me and I am excited to work with the Singapore Rugby Union to make Singapore a distinctive stop on the World Sevens calendar.”

David Lim, Chairman of Rugby Singapore, welcomed the appointment of the new ambassadors, saying: “Ben and DJ are both giants in the sevens game and played massively influential roles in making the game what it is today.

“Both have also been huge proponents of Asian and Singapore rugby and we are indeed honoured that they’ve accepted our invitation to be ambassadors and will help to push the HSBC Singapore Rugby Sevens to the next level.

“Ben’s past association with the SRU makes him a natural ambassador for Singapore while DJ’s undoubted popularity will help us make greater connection with the Singapore public as we continue to build the HSBC Singapore Rugby Sevens into a family-friendly carnival.”

Galastein Tan, Acting Director, Event and Fan Development, Sport Singapore, said: “Inspirational figures are part of the key ingredients to develop a sport. We are pleased to have Gollings and Forbes on board as 2018 HSBC Singapore Rugby Sevens ambassadors. They will definitely play an all-important role to encourage and excite both the aspiring athletes and fans alike. Rugby keep us physically fit and teaches important life skills. I hope the ambassadors in their capacity as role-models will inspire our people, especially the youth, to live better through sport.”

Tickets for the 2018 HSBC Singapore Rugby Sevens are available at www.singapore7s.sg