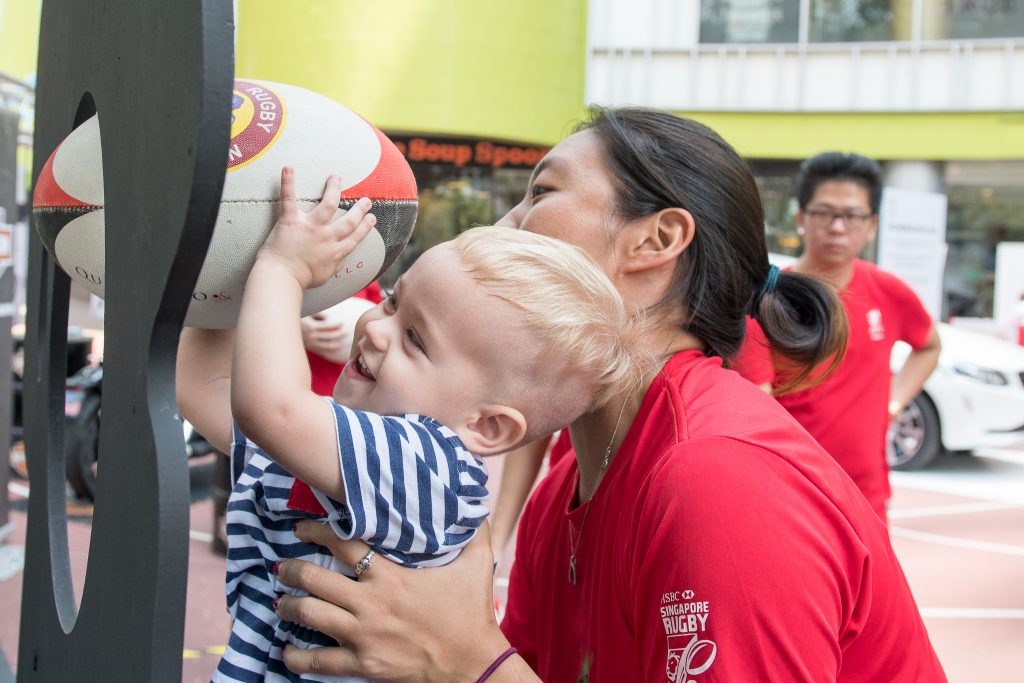 HSBC Singapore Rugby Sevens ticket-holders with children between the ages of four and seven can treat their kids to an enchanted ‘under-the-sea’ journey at the National Stadium on 28-29 April.

With two full days of fast-and-furious on-pitch action, and a packed kids’ entertainment programme in and around the 55,000-seat arena, the biggest celebration of rugby in Southeast Asia has something for every member of the family to indulge in, especially young children.

Created by Cerebral Singapore, the little visitors can be dropped off at its “beachfront” property for a fun-filled experience at the 100PLUS Promenade. The journey will bring endless laughter, fun and surprises.

With three voyages a day, between the hours of 10am-noon, 1pm-3pm and 4pm-6pm, guardians can unwind without worry and be absorbed in the thick of the action at least for a little while. While waiting for the next journey of discovery to begin, children at Cerebral’s drop-off zone can immerse themselves in the sand and ball pits.

Once the parents are fully refreshed, they can pick up their children and lead them to the Fun Zone, where an array of fun activities await on the 100PLUS Promenade and at OCBC Square. But, before they embark on their next adventure around the stadium, children can take advantage of the ‘Under-the-Sea’ photo wall for that Wefie they have always wanted for Instagram, and ‘adopt’ a fuss-free pet balloon walker as they wave goodbye.

The FunZone continues with the interactive spaces of three of the most-loved Hasbro brands – The Transformers, Nerf and My Little Pony, which will send the youngsters on an unforgettable adventure through their respective immersive zones.

With a focus on the theme of the eternal battle between the Autobots and the Decepticons, the Transformer zone will offer a Decepticons target practice, photo opportunities with Transformers cutouts, as well as puzzles and craft activities. The zone will adopt a metallic look, alluding to the strength of the machines in Transformers, and utilise lighting to create colour and depth, so as to create an immersive experience for all.

Rather like the game of rugby, the Nerf-themed activities are based around team play, where participants can form a team and battle it out at the Battle Zone. At the same time, the activities also encourage active play, where participants can test their precision and accuracy at the Blaster Testing Facility. My Little Pony will take young fans to Equestria, where they will get the chance to meet characters such as Pinky Pie, Twilight Sparkles, Rainbow Dash, and Apple Jack.

In addition, Spartan Singapore and Striders Bikes will offer a glimpse of their most interesting activities for kids to try, while The Superdudes will descend into Singapore to let youngsters’ creativity run with their highly energetic live performances. Click here to learn more about the FunZone.

David Lim, Executive Chairman and Managing Director of Rugby Singapore, said: “HSBC Singapore Rugby Sevens is the family sevens and the presence of the highly popular Cerebral beach property underlines the kid friendliness of our event, and how inclusive we want to be with the tournament. While the Singapore Sevens is all about family fun, we fully appreciate that small children have short attention spans, and this activation will give them an extra engagement option, and a two-hour window for their guardians to take a breather to chill with their friends in the stadium, enjoying a casual drink.”

Fans attending this year’s HSBC Singapore Rugby Sevens can look forward to an exciting, six-week Singapore Rugby Carnival in the lead up to the two-day extravaganza on 28 and 29 April. Ticket-holders can enjoy promotional offers at dozens of establishments across the city with discounts and benefits covering a wide range of offerings from eateries to retail outlets, entertainment hotspots and tourist attractions from now until 30 April 2018.

Rugby-themed activations will make their way around Singapore at various weekends until the event to offer members of the public a taste of the sport and enjoy an array of fun activities, access discounted tickets and redemption for existing tickets, and a chance to meet rugby legends and celebrities.

Family packages (two adults and two youths between the age of 4 and 18) start at only $120.

HSBC Singapore Rugby Sevens, International Sports Event of the Year at the Singapore Sports Awards in 2016, is stop 8 of the 10-leg HSBC World Rugby Sevens Series. Sixteen of the world’s top teams will be in town, including defending champion Canada, as well as the traditional powerhouses Fiji, New Zealand, South Africa and Australia.

*Prices inclusive of GST but exclusive of booking fee