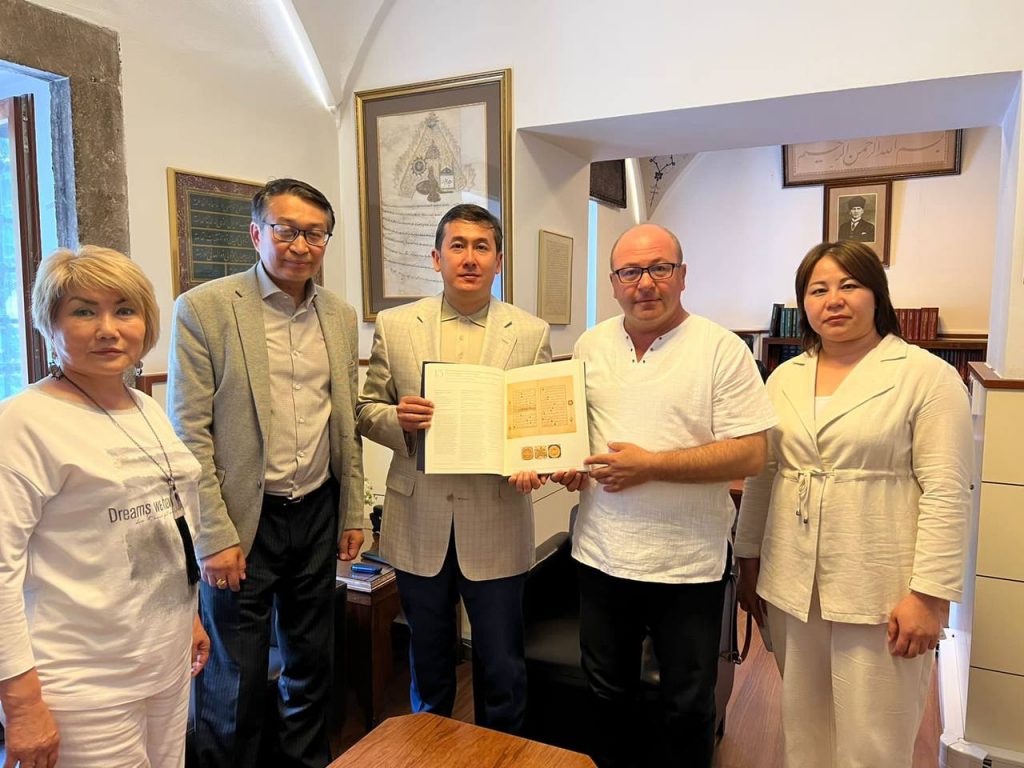 A Group of Kazakh scientists during the visit of Süleymaniye Library in Türkiye. Zhandos Boldykov (M) and Hüseyin Kutan, head of the Rare Manuscripts Department of the Süleymaniye Manuscripts Library holding the page representing 14th century Quran gifted to Uzbek Khan. Photo credit: National Center of Manuscripts and Rare Books.

An ancient Quran gifted to a Golden Horde ruler called Uzbek Khan, fragments of Mahmud Churas’s history book and medieval maps revealing the territories of Kazakhstan along with thousands of pages of other ancient manuscripts discovered in the largest archives of Russia, Turkiye, and Hungary could “open new pages of history,” said Zhandos Boldykov, director of the National Center of Manuscripts and Rare Books, in an interview with The Astana Times.

A group of Kazakh historians and scientists unsealed the largest archives and libraries in Moscow, St. Petersburg, Istanbul, and Budapest during their field trips under the Archive-2025 programme. As a result of those expeditions, around 20,000 pages of books and documents containing interesting historical details were brought back to Kazakhstan.

Since its launch in 2017, the centre has provided the research community with a collection of manuscripts and rare books on the history of Kazakhstan, while also putting their effort into the acquisition, restoration, digitalization, and translation from the ancient languages into Kazakh.

The first expedition was conducted in Moscow. The researchers began their work in one of the largest libraries in the world with more than 300,000 items, the Russian State Library, in its rare books fund.

For Boldykov, one of the most astounding findings involved the “History of Mirza Mahmud Churas,” which contained valuable information about the Kazakh khanate (state) rulers of the 15th-17th centuries. The book shone a light on the remarkable story of Kassym Khan and Tauke Khan. Some entries show information on their political affairs, relocations, and correspondence. 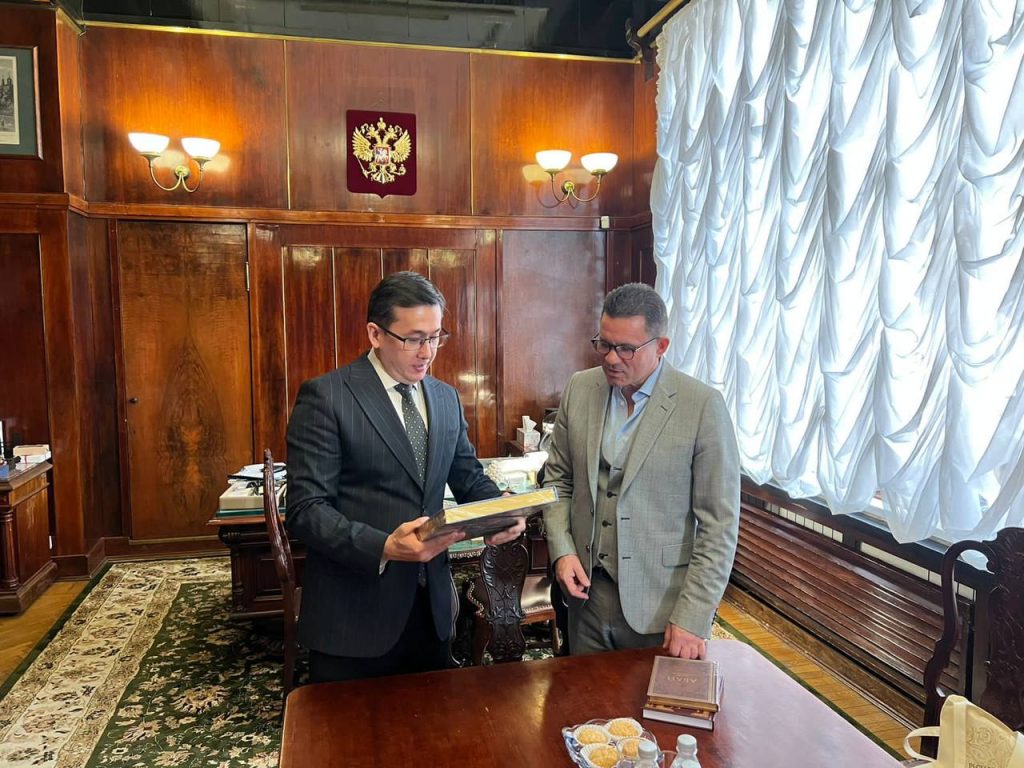 Vadim Duda (R), Director General of the Russian State Library acquainted Kazakh delegation with the activities of the library and led them through the book corners. Photo credit: National Center of Manuscripts and Rare Books

The first part of the book is a rewrite of the famous book of the history of the Moghuls of Central Asia – Tarikh-i-Rashidi of Muhammad Haidar Dughlati, – and it may promote a better understanding of some pieces that might have been distorted by the scribes.

New light has been shed on the history of Kazakhstan through the archives of Süleymaniye Library, the largest manuscript library in Türkiye that preserves one of the world’s most extensive collections of 100,000 Islamic manuscripts and 50,000 printed books.

The most valuable manuscript found in the library was the Holy Quran book belonging to Uzbek Khan, the governor of Altyn Orda (Golden Horde) written in golden letters in the 14th century.

The Quran discovered in Suleymaniye Library archives might reveal more information about the process of Islamization in the ancient Kazakh khanate.

“If we consider that Uzbek Khan and his ulys (regional unit of governance) were among the first to accept Islam in the Kazakh khanate, we could build an assumption that this book has influenced that decision back in 1318,” said Boldykov.

According to historians, his ulys officially accepted Islam in 1320. “In 1318, he fully studied the gifted Quran, consulted with the best imams (worship leaders) of that time, understood Islam, and in two years accepted Islam in his ulys. Islamization has been evolving in our country ever since,” he added.

Scholars have still to make a historical judgment on the validity of the information brought back by the expedition, said Boldykov. “Of course, it is too early to talk about some sensational historic discovery because historians can make a decision only after extensive additional scientific research. Only then can we speak about historical facts that can further be included in the curriculum of schools and universities,” he said.

However, each time “a new page of history opens up.”

The findings are now being brought together by the center’s staff to be handed to the state archive of Kazakhstan. The center is still in the process of gathering the digital versions of the documents, with many of which remaining on the waiting list of the libraries. “Some libraries have limited resources, not all documents are scanned, and scanning ancient manuscripts is not an easy process,” said Boldykov.

“It will probably only be at the beginning of the next year that we will start processing the information in documents in full because there is a very large flow. We brought almost 6,000 documents from Moscow alone,” he said.

The Budapest archive, which the researchers visited last July, has rich records of the manuscripts written by European historians from the 18th century on economics, geographics, life and political issues.

“We found about 30 books there. They are all from the 18th century… Most of those books were published in London, Paris, and New York in French, English and German languages,” he added.

The centre has skillful staff members who can understand and translate both modern foreign languages and ancient Farsi, Osman Turkish, and Chagatai.

The centre has the task of retrieving and preserving copies of the most valuable ancient books. Some books need to go through a restoration process to be well-preserved. The restoration process is interesting but painstaking in itself, according to Boldykov. It takes nearly a month of meticulous work to restore an ancient book or manuscript, and the center has some of the best equipment to do it.

The restoration process has several stages, with the first being a disinfection stage. It takes up to a month of disinfecting in an inert gas vacuum before the daunting task of dismantling can begin.

Dismantling is performed by hand. All pages are cleaned of the remains of dirt, dust, fungus, and even bugs and worms. Pages that are discolored and chipped along the edges are restored and glued back to their original size and color.

Then the restorer places the pages in a pH neutralizing liquid before starting the process of folding back the pages and preparing the cover. 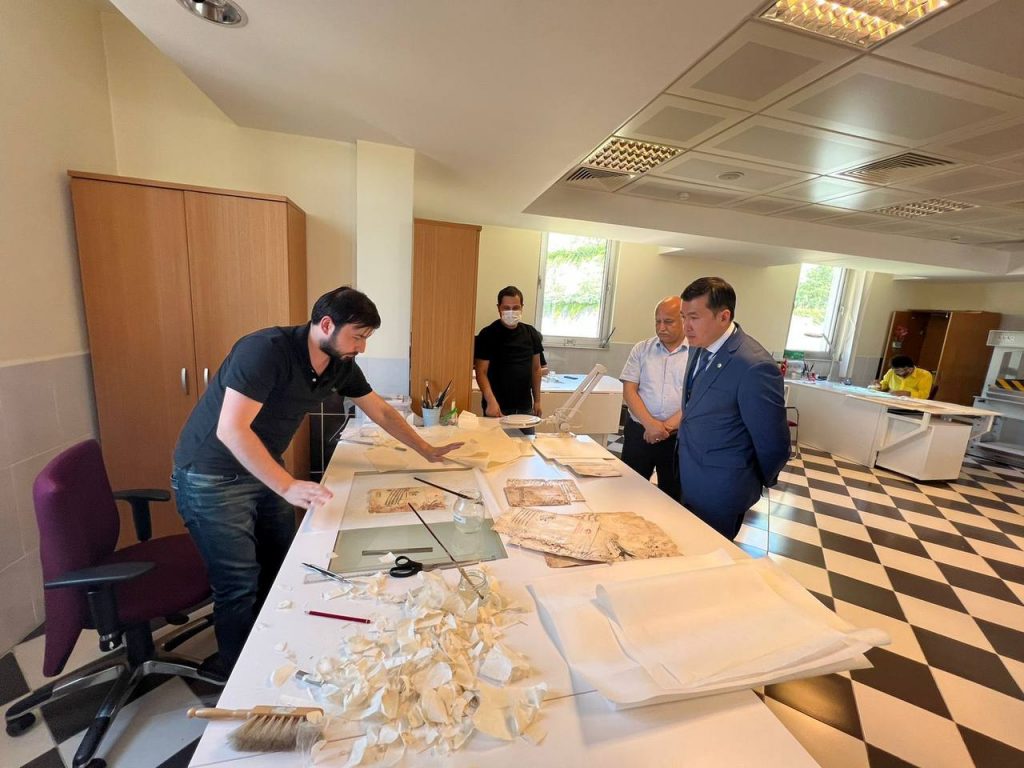 Speaking about future plans, Boldykov explained they are working on creating a website that will give access to the whole catalog of the center to the general public.

“Materials such as these are often unavailable to researchers, and, hopefully, soon, for the first time, modern scientists will have an opportunity to study the archive’s first-hand account from any place of the world,” he said.

Last year the center published the catalog compiling all the books and documents gathered over the years since the opening of the center.

The next expeditions are set to go to India, Iran, Egypt, Spain, Qatar, Uzbekistan, and, once again, Moscow.

Gaze at spectacular starlit skies in New Zealand
To Top