Kassym Amanzholov is known to have introduced the ten-syllable line into Kazakh verse. For the first time, he used the alternation of eight- and nine-syllable lines, which was convenient for conveying conversational intonation.

Kazakhstan might be a young country celebrating the first 30 years of its independence, but its history and culture go beyond the 30 years. On October 10,  2021, Kazakhstan marked 110 years since the birth of prominent poet and writer Kassym Amanzholov.

Amanzholov is known to have introduced the ten-syllable line into Kazakh verse. For the first time, he used the alternation of eight- and nine-syllable lines, which were convenient for conveying conversational intonation.

Born on October 11, 1911 in a steppe village in Karkaraly district, Karaganda Region, Amanzholov’s life was not an easy one from early childhood. He lost his parents at an early age and was raised in an orphanage.

He had a phenomenal memory

According to his mother’s recollections, the boy was born right on the jailau (summer cattle pasture). The family lived in extreme poverty. When Kasym was not even seven years old, Rakhimzhan’s father died of tuberculosis (three decades later, this disease would destroy Amanzholov Jr.).

According to a family legend, the boy left the village when his mother was still very young and married a local bai who did not accept the children of a beggar woman whom he made happy.

Amanzholov was self-taught to the core. He had a phenomenal memory by nature, and during his wanderings through the cities and villages of Sary-Arka, he nailed himself to the places where the mullah taught children. So, listening to the mullah from the street, he learned the Koran.

When Soviet power  strengthened in the north of Kazakhstan, Amanzholov entered the Semipalatinsk Agricultural College, and then, after studying there for a couple of years, transferred to the pedagogical institute in Uralsk.

The distance between these cities is about 2,500km, it is practically the easternmost and westernmost points of Kazakhstan. Considering that the student Amanzholov did not finish his studies there, then rushed to Alma-Ata (plus another 2,500 from Uralsk, already to the south), we can safely talk about the restless creative soul of the future poet.

Before beginning his career as a journalist in 1932, he studied in a veterinary school in St. Petersburg.

Amanzholov became known as a poet in 1931, at age 20, when he published his first poems. His first book – a collection of poems called “Omir Syry” (Confessions of Life in Kazakh) telling about the life and work of the poet’s peers – came out seven years later.

It was in Alma-Ata that his poetic gift was revealed. The first poems were published in 1931 in the regional newspaper. His feuilletons and satirical plays were also published.

The young author was accepted into the Union of Writers of the Kazakh SSR. There were a lot of plans, but the outbreak of the Great Patriotic War prevented them from being implemented.

But it was not until 1945 when the Great Patriotic War began forcing millions of young men, including Amanzholov, to give up their professional ambitions and join the Soviet Army that some of the poet’s most famous poems were written, including “Death of a Poet” reviving the memory of Abdulla Zhumagaliyev, a young Kazakh poet who died at the front.

During the war years, Amanzholov spent days traveling from the Far East to the Western Front in 1943, and these long journeys between the fronts, while crossing his homeland, gave birth to poems such as “Ural”, “Saryarka” and “Baikal.”

These poems rose to a different level with new content, theme, type, means of artistic expression, depth of thought and feelings.

He served in the army newspaper “Forward to the West!”.

The newspaper “Socialist Karaganda” wrote in April 1944: “Senior Sergeant Kasym Amanzholov is an excellent student of combat and political training, a sensitive and demanding boss who knows how to find the keys to the hearts of subordinates, who has won the ardent love of fighters. His poems, published in frontline newspapers, cause readers to love the Motherland, incite an unquenchable hatred of the enemy.”

On the front line, he met a brave machine gunner, and in peacetime, a miner from Karaganda, Martbek Mamraev, who became a Hero of the Soviet Union, having accomplished the feat of crossing the Dnieper. Amanzholov dedicated a poem to the hero.

One of the central works of the Kazakh poet about the Great Patriotic War is the poem “Abdullah” (later called “The Legend of the poet’s death”).

People’s Writer of Kazakhstan Gabit Musrepov wrote about this work: “The poet Kasym was quite able to convey the spiritual appearance, the power of revenge, the consciousness of the duty of his hero-poet. The poet’s fiery poems evoke a burning hatred for the enemy, they sink deep into the heart of a person. Kasym’s poem seems to resemble a formidable wind from the front.”

Seeing blood and death firsthand,  Amanzholov remained a romantic. Here is just one stanza from “Abdullah”:

I’m wounded, in a gray overcoat
I’ll go through the storm fronts
With poetry, dream and faith
Towards new times.

The army command certainly appreciated the front-line writer. On the website “Memory of the People” there is an interesting document dated August 1943: “The list of sergeants of the 278th separate engineer battalion, seconded for further service in the 9th reserve rifle Brigade.”

Amanzholov is listed at number 10 in the list, and in the column “Specialty before conscription” it is indicated: “Poet”. It looks impressive, especially when you read the professions of other fighters written next to each other: carpenter, milling cutter, combine harvester, etc.

Following the end of the war, Amanzholov worked in the editorial offices of several magazines.

He later returned to Kazakhstan as an established folk poet. He achieved high results in all topics: love and landscape lyrics and poems relevant to that time on the topic of communist construction.

The poet received a spacious apartment in Alma-Ata from the state, he was constantly invited to Moscow for decades of Kazakh literature. Literary critics were favorable to the Kazakh talent. For example, the famous Soviet poet Nikolai Tikhonov (his lines from the “Ballad of Nails” became immortal: “Nails would be made of these people / There would be no nails in the world stronger”) called the “Legend of the poet’s death” the “pearl of Kazakh literature”.

In 1946 alone, Amanzholov wrote 26 poems, including “Dostar” (Friends in Kazakh), “Tugan Jer” (Homeland in Kazakh), “Dombyra” and “Mai Keldi” (May has come in Kazakh).

The next year, however, Amanzholov became sick. But, despite his worsening health, he continued writing and translating some of the world’s famous poems into Kazakh.

Over the years, Amanzholov experimented with different styles from traditional zhyrau (tales in Kazakh) and tolgau (reflections in Kazakh) poetry to feuilletons and one-act satirical plays.

He is known to the literary community of the largest Central Asian republic as a translator into Kazakh of the works of Pushkin (“Poltava”), Lermontov (“Masquerade”), Tvardovsky (“Vasily Terkin”). 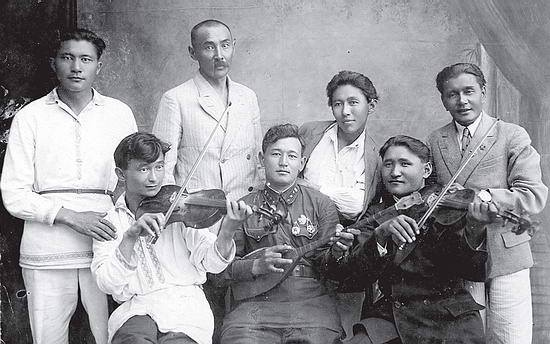 Amanzholov died in the prime of life at age 44 from tuberculosis, fighting the disease for a decade.

When the fame of the poet reached every village, there was also a mother Aygansha, who abandoned her son in early childhood.

Amanzholov forgave his mother and soon died literally in her arms. The disease slowly undermined the writer for many years.

Amanzholov was treated in allied sanatoriums, and in the picturesque foothills of Alatau they even erected a real yurt for him, where he drank medicinal koumiss and breathed mountain air.

The poet spent his last summer of 1954 on Lake Borovoye, which is a sanatorium and resort attraction of Kazakhstan. By the fall, his condition had deteriorated dramatically. He died on January 18, 1955 at the age of 44. His mother, who was on duty at his bedside, saw him off on his last journey.

“The poet considers the truth of life transformed into the truth of art as a striving for eternity, as an achievement. He is connected with the people with all his heart, so his poetic ‘I’ is perceived by the reader as something of his own, understandable and close. Pushkin once noted that a true poet is interesting for readers in all states – cheerful, sad, or in love. Amanzholov, as a poet, is seen in different states, and in all of them, he excites us with his fullness of emotions and depth of thought. His poetry shows us examples of the diversity of human experiences,” wrote Taken Alimkulov, a famous Kazakh writer, in his introduction to Kassym Amanzholov’s poetry collection published by the Moscow-based Art Literature Publishing House in 1975.

As Alimkulov wrote, Amazholov’s poetry will allow “our children to see how their fathers thought, felt and lived” representing a “chronicle of his time.”

I am a small dot in your space.

I have no time to go around your expanse,

Compared to eternity we live a moment.

People to come! Kassym sees you.

You walk the earth as a palace of gold.

I shall lie beneath the earth at this time,

Wrapped forever in the earth’s blanket.

How many wrinkles the earth has on its face,

My footprints are now under the ground…”

Today, Kazakhs keep the poet’s memory in the names of streets of large cities. Streets in Nur-Sultan, Shymkent, Karaganda, Uralsk and Atyrau are named after Amanzholov.

The “Amanzholovsky magazine” is published in Karaganda, where the works of the early writers of the republic are printed.

Annual “Amanzhol readings” are held. Ten years ago, on the centenary of the poet, a majestic bronze monument to Amanzholov was inaugurated in Karaganda.

And in the village in the Kentish Mountains, where he was born, a sign with an inscription was installed on a spring bubbling from the ground, stating that the future poet once quenched his thirst there. A spring of inspiration.