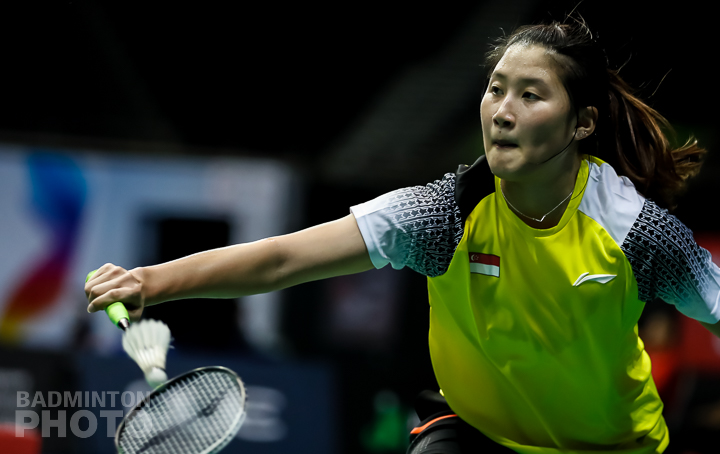 The Singapore Badminton Open 2019 started at the Singapore Indoor Stadium on Tuesday (April 9).

Singapore’s most prestigious badminton event returned with smashing action on the first day.

In the women’s singles, Singapore’s Jaslyn Hooi (above) caused an upset in her qualifying match against Canadian Brittney Tam, beating her 21-17, 24-22.

Tam, world ranked 74 is over a 100 places above Hooi (#235) and this is the first time they faced each other competitively.

“When I went into the match, I had zero expectations and I prepared well. So I’m quite glad
to win, but I will prepare more for my next match,” said Hooi.

In the mixed doubles, the new Singapore pairing of Andy Kwek and Citra Putri Sari Dewi triumphed over Australian duo Simon Leung Wing Hang and Gronya Somerville 21-18, 21-16. Kwek and Citra will next face Kohei Gondo and Ayane Kurihara from Japan.

“I think we played not bad today, we just have to keep it up and enjoy the game because we don’t expect much, so we just enjoy the whole experience and try our best,” said Kwek.

Local shuttler, Loh Kean Yew (below), who recently shot to fame when he beat Lin Dan at the Princess Sirivannavari Thailand Masters 2019 in January, fell short. He lost to Lee Cheuk Yiu from Hong Kong 21-16, 21-17 in the first qualifying round.

“My opponent was very well-prepared and played fiercely. Since we played before, he is more familiar with my playing style and knows my weaknesses, and he prepared for the match better than I did,” said Kean Yew after his defeat. “I will still continue to train and prepare for the next match and the Olympics is starting soon so I have to work harder to prepare to qualify.”

Main Draw: Defending champions and World No. 1 through to the next round

World ranked #1 Marcus Fernaldi Gideon and Kevin Sanjaya Sukamuljo survived a tight contest against their Indonesian compatriots Berry Angriawan and Hardianto to make it to the next round, winning 21-18, 13-21, 21-16.

Ahsan and Setiawan will face Korean fan favourites Lee Yong Dae and Kim Gi Jung in the next round. Lee and Kim beat Mohamad Arif Ab Latif Arif and Nur Mohd Azriyn Ayub Azriyn from Malaysia 21-16, 21-13 in the first round of the tournament.

Singapore’s Danny Bawa Chrisnanta and Loh Kean Hean advanced to the main draw after beating Indian duo Balasubramannian Narendran Geetha and Raphel Sharon 21-15, 21-14 earlier in the day. They will go on to face Manu Attri and B. Sumeeth Reddy in the first round of the main draw.

“We started slow, making a lot of mistakes but after that we got used to the wind and played better. We also played with little pressure, the real match is tomorrow so we just enjoyed our game,” said Kean Hean after their victory.

In the women’s doubles, Bernice Lim and Koh Ker’Sara, who received a bye in the qualifiers, faced fellow local shuttlers Jaslyn Hooi and Crystal Wong in the first round. Hooi and Wong edged out Lim and Koh 21-13, 21-19.

“We are just going in to give our best and since we are young, we can push all the way and as long as we give a good fighting spirit and put up a good performance, we will be satisfied,” said Wong. 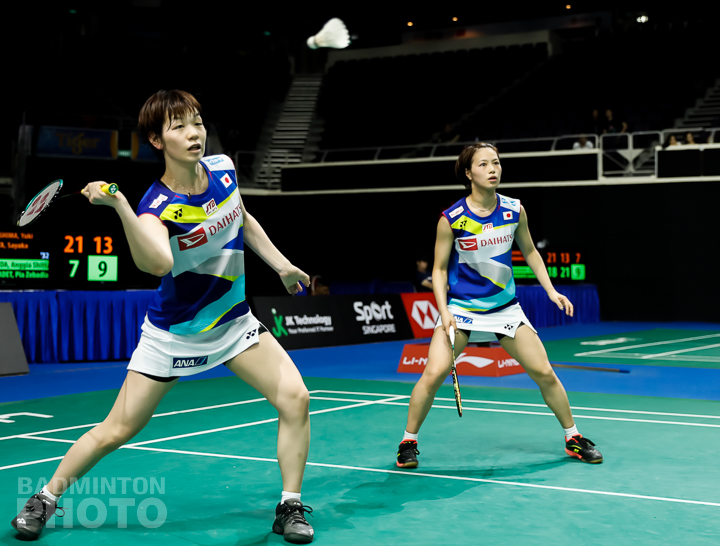 Singapore Open defending champions Ayako Sakuramoto (JPN) and Yukiko Takahata (JPN) began their campaign against Chen Lu and Xu Ya from China. It was a successful start for the Japanese pairing as they won 21-18, 21-15.