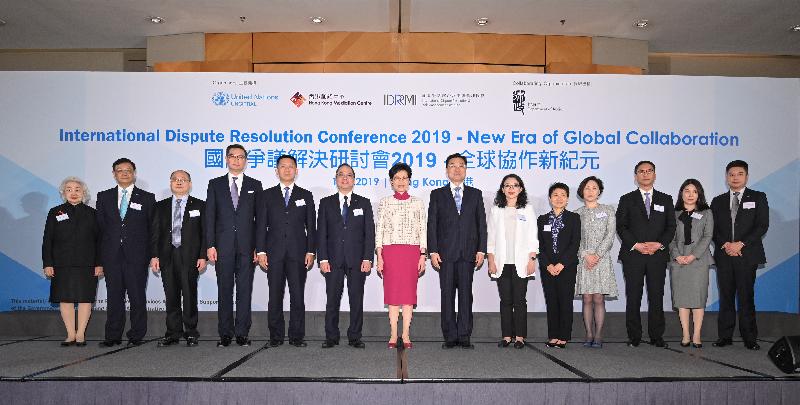 This event was funded by the Professional Services Advancement Support Scheme of the Government of HKSAR.

Hong Kong Mediation Centre welcomed more than 850 participants to learn more about the emerging risks, trends and solutions for commercial, trading and investment disputes among states, organisations, businesses and individuals. 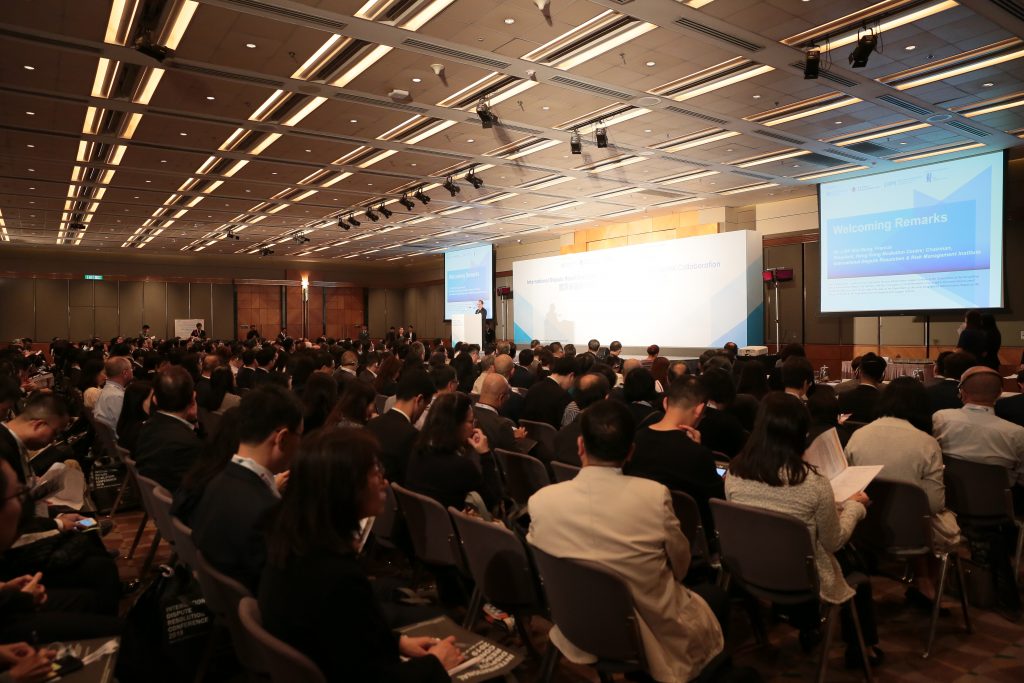 "Globalisation beings with rapid increases in trading and investment collaborations, which carry the inevitable risk of creating conflict," said Dr Francis Law, President of Hong Kong Mediation Centre, and Chairman of IDRRMI. "As a leading international dispute resolution centre and a hub for global business and investment, Hong Kong has an invaluable role to play in serving as a cross-border risk management, deal-making and disputes resolution services centre in the Greater Bay Area, Belt and Road Countries and worldwide.

"That was why the decision was made jointly by the UN, IDRRMI and Hong Kong Mediation Centre to work together in organising this first-of-a-kind conference in Hong Kong."

The Secretary of UNCITRAL and Director of the Division on International Trade Law in the Office of Legal Affairs of the United Nations Ms. Anna Joubin-Bret shared her insights via a specially-prepared video. She expressed high appreciation for the work of HKMC, IDRRMI, the Chinese Mainland Government and the Hong Kong SAR Government, acknowledging the enormous support shown to UNCITRAL's work in harmonising and modernisingthe national and regional regulations for international trade and promoting the United Nation Convention on Mediation.

UNCITRAL was also represented in person by Athita Komindr (below), head of the Regional Centre for Asia and the Pacific. 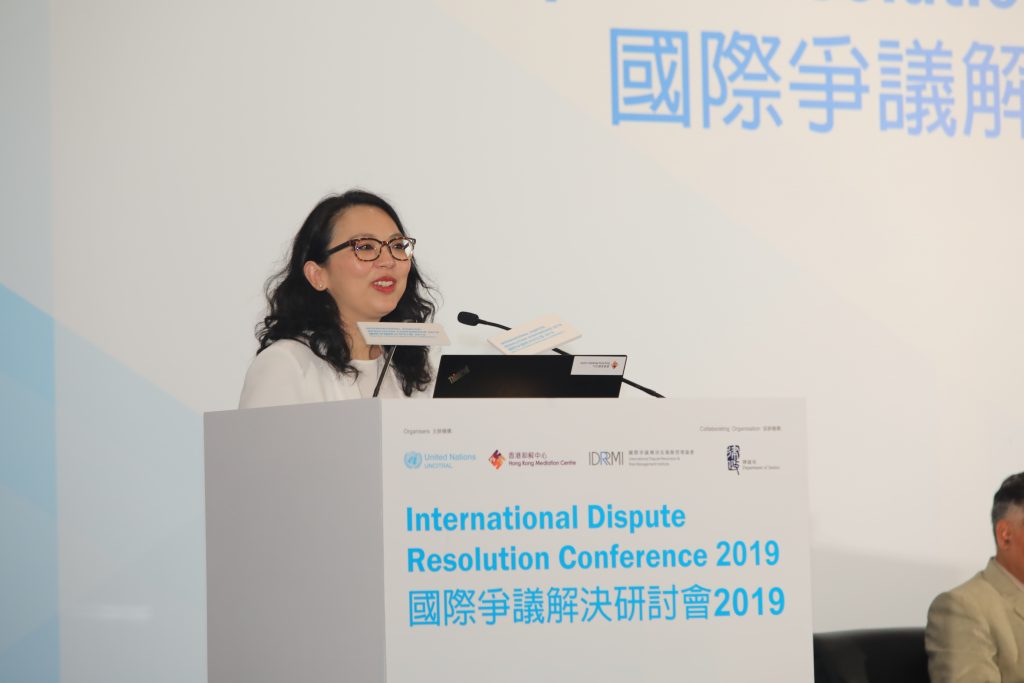 "I wish I could be in Hong Kong with you now to witness first-hand the great success of this fully-booked event, which I'm told numbers over 900 registered attendees - far exceeding the initially planned attendance of 500 people," Ms. Anna Joubin-Bret told the conference by video.

"This event is aptly titled New Era of Global Collaboration and your overwhelming interest underlines the critical importance of dispute resolution as a legally enabling framework for trade and investment, for businesses and governments alike. IDRC 2019 comes at a particularly important moment for mediation, one of the main focuses of today, which is becoming an increasingly popular tool for resolving disputes while persevering relationships."

The event began with an opening speech from Mrs. Carrie Lam Cheng Yuet-ngor, the Chief Executive of the Hong Kong Special Administrative Region. Opening remarks were also given by Mr. Xie Feng (below), Commissioner, Office of the Commissioner of the Ministry of Foreign Affairs of the People's Republic of China (PRC) in the HKSAR, Mr. Ye Jun, Deputy Director General of the Department of Treaty and Law, Ministry of Commerce of the PRC (MOFCOM) and Mr Justice Jeremy Poon, Justice of Appeal of the Court of Appeal of the High Court, Judiciary of the HKSAR. 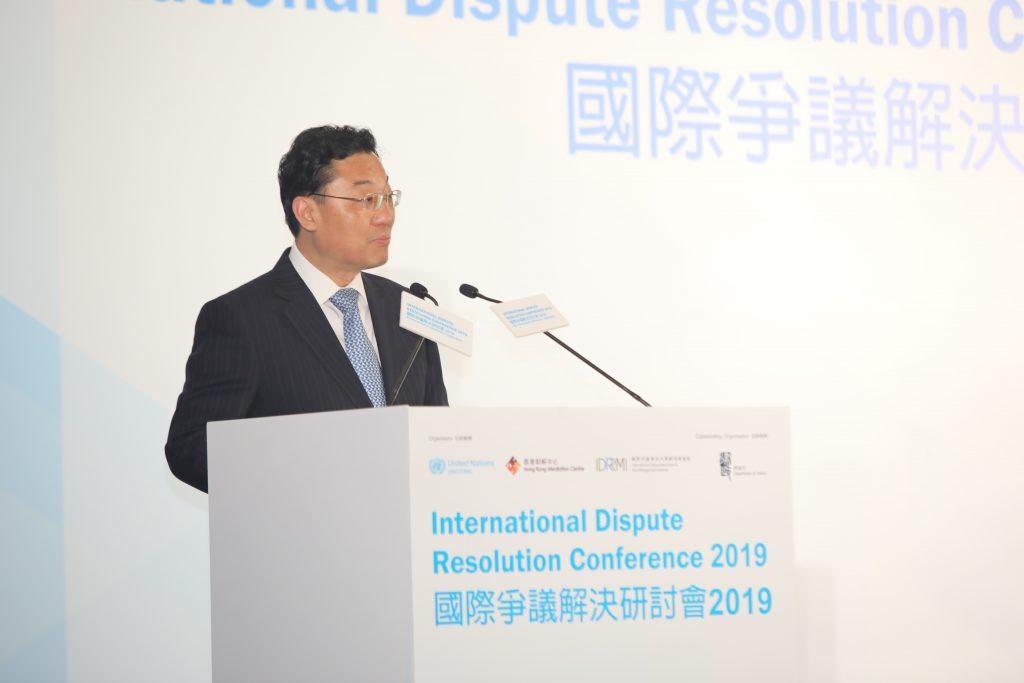 "Given our status as a leading international dispute resolution centre in Asia Pacific, I believe that Hong Kong is indeed the ideal location for this event," Mrs Lam told the audience. She said that global collaboration is needed more than ever to tackle the daunting challenges faced by the world and that an increase in international trade and investment disputes seems to be inevitable given the growth in cross-border economic activities and transactions, especially in Asia.

"As an international legal and dispute resolution services centre in the Asia Pacific region, Hong Kong will continue to follow closely the development on international mediation and arbitration, while embracing the immense opportunities that may emerge," Mrs Lam said.

In the face of growing instability and potentially disruptive disputes, the UN recently approved the Convention on International Settlement Agreements Resulting from Mediation, a global framework for conflict resolution between international and cross-border parties.

Widely known as the "Mediation Convention", this global standard has opened up a wealth of new professional and business opportunities in the dispute resolution field. As a global hub for trade and finance, Hong Kong's integral role in meeting this growing need was spelt out repeatedly at the first International Dispute Resolution Conference 2019.

Dr Francis Law shared his gratitude to all the day's participants and extended apologies to the more than 500 applicants unable to be accommodated at the conference - pledging that the International Dispute Resolution Conference will now be established as an annual event. "We are going to organise this important event every year and welcome more international dispute resolution professionals and traders to come to Hong Kong to join us," he added.