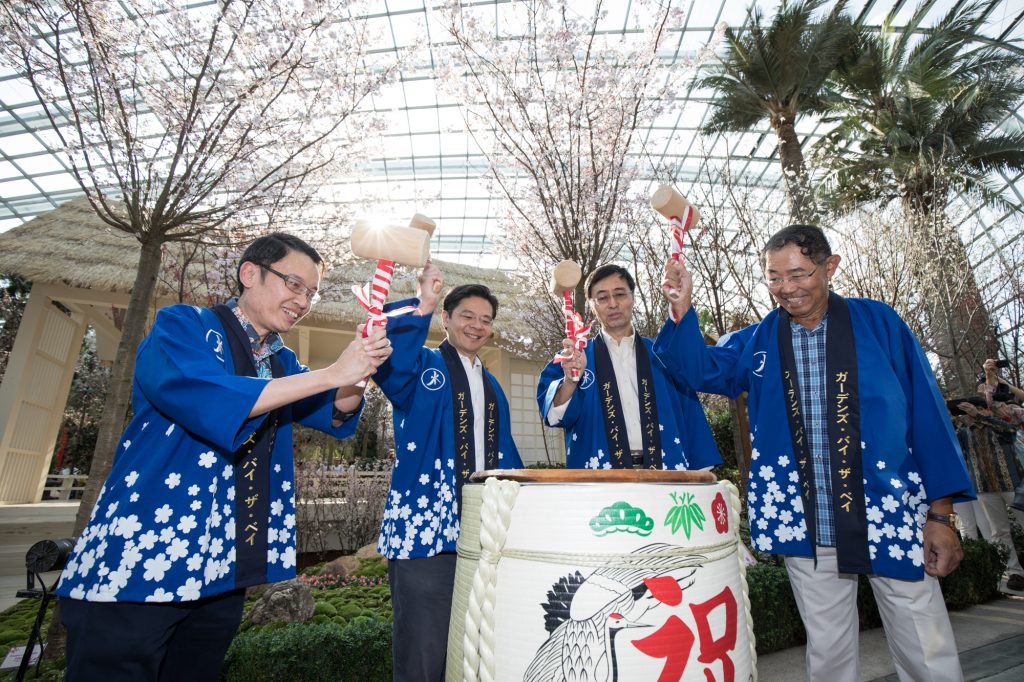 After the popularity of the inaugural Sakura Matsuri last year, Gardens by the Bay’s Japanese-themed festival returns for the second time – with more free activities than before for people in Singapore to enjoy.

At the launch on Saturday (March 9, 2019), Singapore’s Minister for National Development and Second Minister for Finance Lawrence Wong and the Ambassador of Japan to Singapore Jun Yamazaki broke a sake barrel to symbolise the beginning of Sakura Matsuri. They also enjoyed an energetic performance of
Suzume Odori, the traditional Japanese “sparrow dance” that welcomes spring.

More free events for one and all

The majority of this year’s Cultural Programmes will be held outside Flower Dome, and is free for everyone to enjoy. These programmes are curated in partnership with Japan Creative Centre, the
cultural arm of the Embassy of Japan in Singapore.

Throughout March, visitors will get to see a showcase of traditional arts such as folk dance, instruments like the koto, shakuhachi and taiko, as well as martial arts such as kendo.

Headlining Anime Garden, which takes place in the last weekend of March at The Meadow, are free anisong concerts featuring well-known names in the industry like Megumi Nakajima, ReoNa and Ayaka Ohashi, as well as appearances by international celebrity cosplayers such as Olivie & Luffy from Hong Kong and MON from Taiwan.

Performing for the first time at the event are local J-pop idol groups Tokimeki JUMP and Natsuiro Party, and finalists of the World Cosplay Summit (Singapore). In addition, the cosplay competition
featuring recreations of anime and manga characters by enthusiasts makes a return.

This year, the ever-popular cherry blossom floral display in Flower Dome is more evocative of Japan than before. Visitors can look forward to seeing interpretations of iconic elements of the Land of the Rising Sun, nestled among the pretty pink and white hues of cherry blossoms. 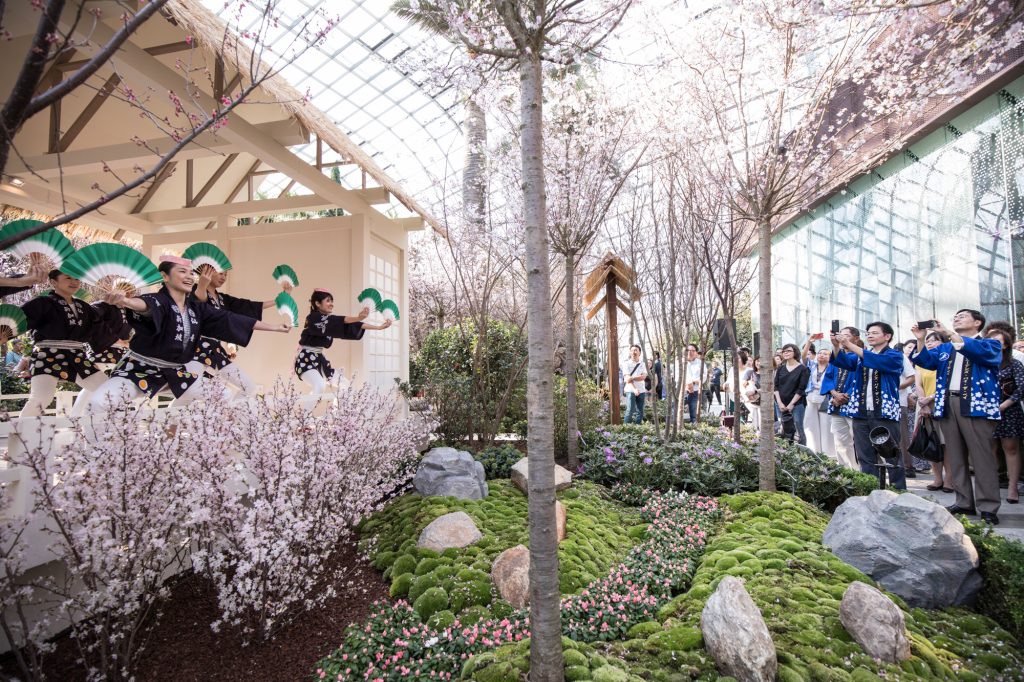 Among such elements are a dramatic pathway lined with 15 Torii gates, reminiscent of the famous Torii tunnels of Japan’s shrines; a red bridge inspired by the Hirosaki castle bridge in Aomori, which is often touted as a particularly picturesque spot to view cherry blossoms; and marumado, or traditional circular windows whose aesthetic principle is to perfectly frame a carefully-cultivated scene as one peers out.

The star of the floral display is the spectacle of cherry blossoms blooming in the tropics – of which visitors can look forward to seeing 30 varieties throughout the duration of the display. These varieties include Prunus serrulata ‘Pink Perfection’ with large blooms of 5cm in diameter, the showy Prunus
‘Kanzan’ with each blossom having 20 to 30 petals, and unusual weeping forms of sakura trees.

Due to the unseasonably warm weather, some cherry blossom varieties have bloomed earlier than expected, and the floral display could reach full bloom earlier than in previous years. Visitors can check Gardens by the Bay’s Facebook page at www.facebook.com/gardensbythebay for updates on the state of blooming before they visit.

Happening across from the floral display in Flower Field Hall is Nippon Street, a Japanese themed-fair organised in collaboration with JTB Pte Ltd. This year’s fair, which has no admission charge on weekdays, is more extensive than last year.

There are more than 20 food and retail stalls; traditional games such as fishing coloured balls with a washi paper net; and the chance to try kyudo or Japanese archery, as well as dress up like a samurai warrior of yore.

CEO of Gardens by the Bay Mr Felix Loh said: “With beautiful cherry blossoms bursting into flower
already, and a wonderful variety of Japanese-themed activities, many of them free, we encourage all
to join us at Sakura Matsuri for an unforgettable experience you can only get at Gardens by the Bay.”

Say konnichiwa once again to Sakura Matsuri , the popular cherry blossom festival that makes a return to Gardens by the Bay this March!

Admire the ephemeral beauty of sakura as you stroll through the cherry blossom floral display (?
?????), and explore the food, costumes and products of Japan at Sakura Matsuri: Nippon Street (???). Fans of the Japanese culture are also in for a treat with Sakura Matsuri: Cultural Programmes (??????) featuring instrumental and dance performances. In the last weekend of March, Sakura Matsuri: Anime Garden (????) will bring Japanese animation to life!

Feel the crisp chill of early spring in the air at Flower Dome, and experience the ephemeral beauty of sakura at the cherry blossom floral display. This year’s floral display showcases an elegant landscape more reminiscent than ever before of the Land of the Rising Sun. Take an idyllic stroll through a dramatic row of Torii gates ensconced beneath a breath-taking canopy of pink and white cherry blossoms, then cross a traditional red wooden bridge to peek through circular windows known as marumado, each perfectly framing a self-contained scene. There are 30 varieties of cherry blossoms to see throughout the display!

SAKURA MATSURI: NIPPON STREET
Taste the flavours of Japan at Sakura Matsuri: Nippon Street, a specially-curated Japanese-themed
fair held in collaboration with JTB Pte Ltd. As you walk down the streets of retro Japan in Flower Field
Hall, enjoy Japanese street food, rent a yukata or try your hand at some traditional festival games!

Continue your journey at Waterview Room, where the Ohanami Street boasts a contemporary contrast to Nippon Street. Here, you can savour the latest ingenious flavours of Japanese instant noodles, or wind down a busy day at the sake station.

Experience the intricacies of Japanese culture with Sakura Matsuri: Cultural Programmes organised in collaboration with Japan Creative Centre, the cultural arm of the Embassy of Japan in Singapore. Visitors get to enjoy a diverse array of activities that range from graceful tea ceremonies to exuberant dance performances like the Sendai Suzume Odori – the sparrow dance of spring.

Wadaiko (Japanese Drum) Performance
The art of Japanese drums comes alive with a heart-pounding performance by the Taiko Group of
The Japanese Association, Singapore!

Koto & Erhu Performance
Marvel at the lush sounds of Japanese koto and Chinese erhu in this collaborative performance by the
Koto Group of The Japanese Association, Singapore, and the Niko Dokokai. 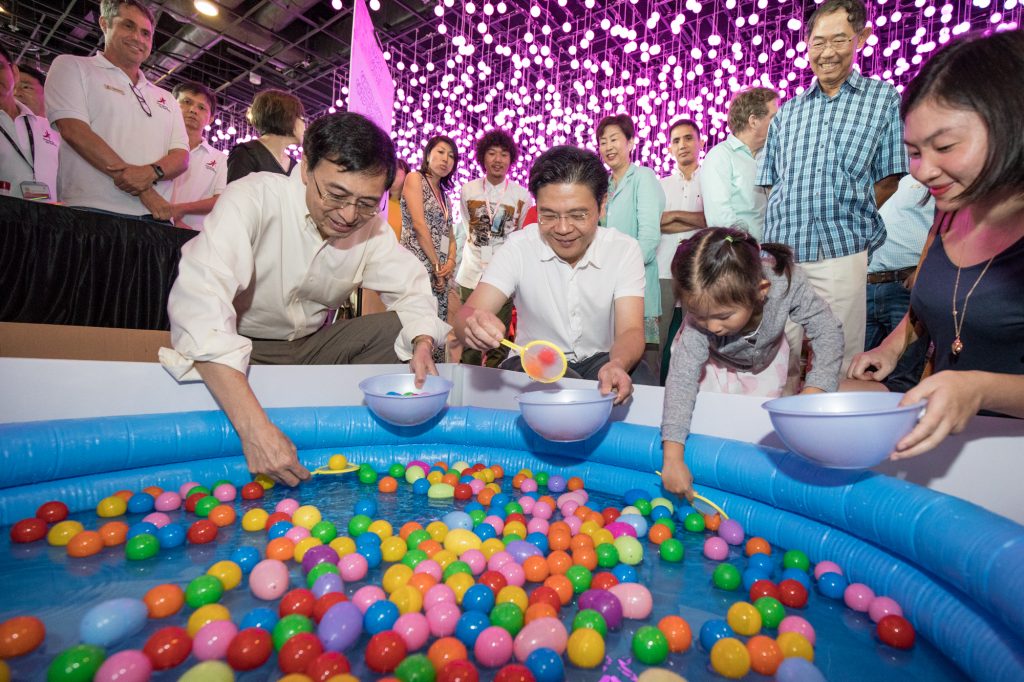 Japanese Dance Performance
Groove to the rhythmic moves by Team Kmicco Japan as they dance to popular tunes from Japanese
artist GARNiDELiA. The three-member group comprises Kmicco (choreographer of the Chingay Parade dance for the past five years), Shiz and Miyu.

Choral Performance
With a diverse repertoire ranging from traditional Japanese songs to musicals in English, the Ladies
Chorus of The Japanese Association, Singapore will enchant you with their breath-taking voices.

Keyboard & Flute Performance
Featuring talented soloists from esteemed musical institutions in Japan and France, be enthralled by
their talent and skill in this unforgettable collaboration performed by the Music Group of The Japanese
Association, Singapore.

Kendo Demonstration
Kendo is a traditional Japanese martial art widely practised both within Japan and in many countries
around the world. Check out the thrilling demonstrations by members of the Singapore Kendo Club!

Koto & Shakuhachi Performance
The Koto Group of The Japanese Association, Singapore will be collaborating with a renowned local
shakuhachi (Japanese flute) player for a truly unforgettable performance.

Japanese Tea Ceremony
Conducted by Hoseikai from The Japanese Association, Singapore, witness first-hand a Japanese tea
ceremony (chanoyu), which is also known as the Way of Tea (chado or sado), a ritualised preparation
and serving of powdered green tea in the presence of guests.

Celebrity Cosplayer Meet & Greet
Get up close with your favourite celebrity cosplayers including Thames Malerose from Thailand, MON
from Taiwan and the dynamic duo Olivia & Luffy from Hong Kong as they make special appearances
at The Meadow. Don’t miss out on the chance to get their autographs and official merchandise!

Cosplay Competition & Performance
Catch finalists from the World Cosplay Summit 2019 (Singapore) on stage as they wow the crowd
with their costumes and moves. Put on your best cosplay outfit and cheer on them on!

Anime Screening
Delve into the animated worlds of mystery, laughter, joy and tears with the screening of Crayon
Shinchan the Movie: Bakumori! Kung Fu Boys – Ramen Chaos and A Silent Voice at Anime Garden
2019!

Matsuri Marketplace
Relax and have fun at the Matsuri Marketplace! There is a variety of activities for everyone – don a
yukata and hang up your own ema, treat yourself to yummy Japanese street eats and indulge in
anime merchandise at the retail booths.
* Charges apply.