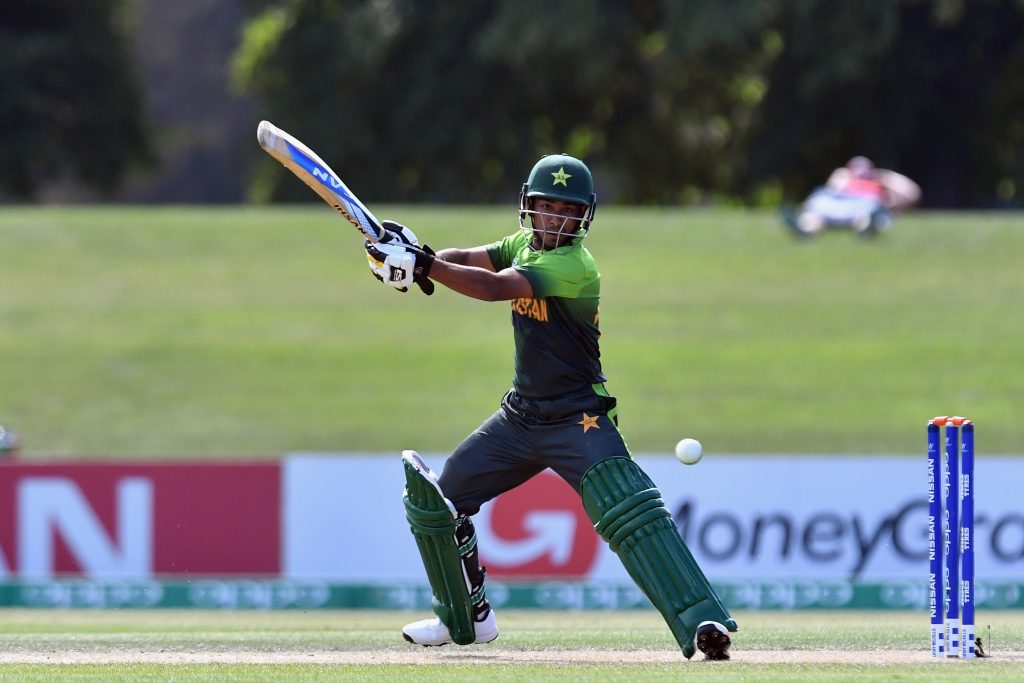 A composed 74 not out from Ali Zaryab ensured that the hard work of fast bowlers Muhamad Musa and Shaheen Afridi did not go waste as he guided Pakistan to a three-wicket victory over South Africa in the ICC U-19 Cricket World Cup Super League quarter-final in Christchurch, New Zealand, on Wednesday (January 24).

In front of broadcast cameras, left-handed Zaryab compiled a cautious but attractive 74 not out, a 111-ball knock with five fours that took two-time champions Pakistan to their target of 190 in 47.5 overs after the pace-duo of Musa and Shaheen had shared five scalps to help restrict South Africa to 189 for nine.

The victory over the 2014 champions means Pakistan will now play the winners of Friday’s quarter-final between India and Bangladesh in the second semi-final in Christchurch on January 30.

The 2004 and 2006 champions have to be thankful to Zaryab, who was not perturbed even as the Asian side were reduced to 111 for five after all-rounder Jason Niemand gave South Africa a glimmer of a hope with the wickets of captain Hassan Khan and Muhammad Taha.

But in Saad Khan (26, 62b, 3×4), Zaryab found an able partner and added 65 crucial runs for the sixth wicket, which proved to be decisive in a low-scoring affair.

This was Zaryab’s third half-century in the tournament and second successive player of the match award after his 59 in another low-scoring match against Sri Lanka which ensured Pakistan not only qualified for the Super League but eventually topped their group ahead of Afghanistan.

Earlier in the day, Pakistan fast bowlers Musa and Shaheen justified Hassan’s decision to bowl first as they made deep inroads into a strong South Africa’s batting line-up.

Shaheen struck as soon as he was introduced into the attack in the sixth over and along with new-ball bowler Musa seized the initiative for his team.

Shaheen struck two telling blows when he removed openers Matthew Breetzke (12) and Jiveshan Pillay (14) just as they looked to be batting themselves in.

Shaheen got Breetzke to edge one to wicket-keeper Rohail Nazir and then bowled Pillay with an in-swinger that went through taking the inside edge. The pair of dismissals took Shaheen’s tally in the tournament to 11, the joint-highest along with Canada’s Faisal Jamkhandi.

Musa chipped in with the wickets of captain Raynard van Tonder (4) and Hermann Rolfes (5) as South Africa were left reeling at 43 for four in the 15th over. Van Tonder was caught at mid-off off a leading edge while Rolfes was caught behind the wicket off an inner edge.

Musa also dismissed a well-set Makwetu (60, 65b, 4×4, 1×6), who was out pulling a ball, to further reduce South Africa’s chances of a fightback. A couple of run outs and some good support from the spin bowlers kept Pakistan in tight control of the proceedings.

Pakistan captain Hassan Khan, while praising his players, said he is hoping his team would bat better in upcoming matches.

“We could have finished it more easily but I think it is a learning experience for all of us. Hopefully, we will learn from the mistakes and not repeat them in the next match,” he said.

“The way they (Musa and Shaheen) have bowled throughout and the way they have bowled today is outstanding. I’m relaxed with the boys, the way they are bowling, and really happy and looking forward to other matches. He (Zaryab) is the wall for our Pakistan U-19 team. The way he has batted today and (in the) previous match as well, I hope he will continue his form and do well in the next few matches as well.”

Ali Zaryab said this was the biggest moment of his career so far: “I was always confident I could win the match and knew I had to aim to bat the full 50 overs. This is a huge win for us, a morale-booster since it was a big knock-out match. The game was broadcast live and the whole world was watching us. There can’t be a better feeling and the whole team is now looking ahead to the semi-finals with confidence.”

“Our top order did not step up today. Our middle order batted us to a decent position but we were some 20 runs short. As a batting unit we have not really stood up. We put ourselves in trouble with the bat in every game,” he said.