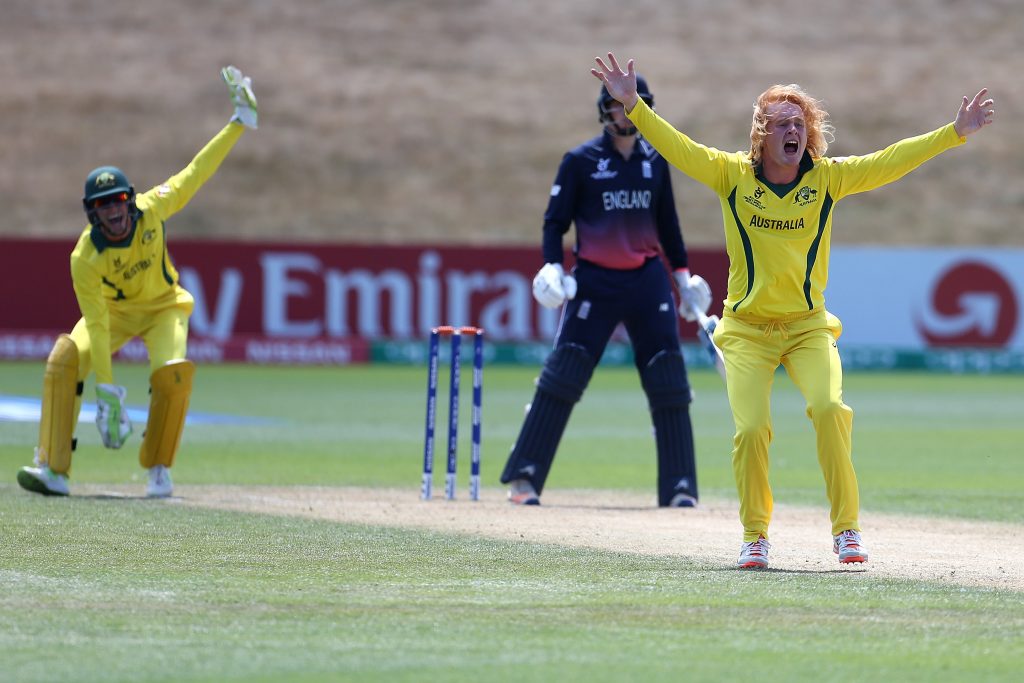 Leg-spinner Lloyd Pope produced a dream spell of 9.4-2-35-8 as Australia defeated England by 31 runs in a dramatic fashion at the John Davies Oval in Queenstown to march into the Super League semi-finals of the ICC U-19 Cricket World Cup in New Zealand on Tuesday (January23).

Lloyd’s bewildering spell turned the game on its head as England were spun out for 96 in 23.4 overs after being 47 for no loss in the eighth over while chasing 128 for victory in front of the broadcast cameras.

The astonishing effort ensured Australia captain Jason Sangha’s fighting 58 did not go waste for the three-time champions, who now await the winner of Thursday’s quarter-final between New Zealand and Afghanistan to know who they play in the first semi-final on Monday, January 29, in Christchurch.

Pope’s spell was the best-ever in the ICC U-19 Cricket World Cup to date, bettering his team-mate Jason Ralston’s seven for 15 against Papua New Guinea earlier in a league match. This performance was also second to former India fast bowler Irfan Pathan’s nine for 16 against Bangladesh at the Gadaffi Stadium in Lahore in 2003 in all U-19 matches to date.

Pope was not the only one to shatter a big record on the 11th day of the tournament.

In one of the two Plate quarter-finals of the day, Sri Lanka opener Hasitha Boyagoda slammed a stroke-filled 191 to establish a new mark for the highest individual score in U-19s to help his side beat Kenya by 311 runs. In the other quarter-final, half-centuries by Nyeem Young, Bhaskar Yadram and Emmanuel Stewart helped the Windies overpower Ireland by four wickets.

Australia elected to bat on a sunny day but were bowled out for 127 in 33.3 overs with skipper Sangha waging a valiant battle. Sangha struck seven fours during his 91-ball 58 and was the ninth man out.

Australia were tottering at 86 for seven when Sangha put on 36 runs for the eighth wicket, the highest partnership of the innings, with Zak Evans (12). Opener Max Bryant (16) and Nathan McSweeney (10) were the other Australia batsman to reach double-figures.

Pennington provided England a near-perfect start when he removed openers Jack Edwards (3) and Bryant with Australia’s scorecard reading 22 in the fourth over. Bamber then picked up first of his three wickets when he dismissed Jonathan Melo (4) as Australia slipped to 27 for three.

The 1988, 2002 and 2010 champions slid into further trouble when Pennington accounted for Param Uppal (0) with the scoreboard showing 28 for four in six overs, which soon became 59 for five in the 13th over with the fall of Will Sutherland (4) who was Bamber’s second victim.

With half the side back in the hut, captain Sangha took control of the proceedings and gave his bowlers something to bowl at by carrying his side to 127 in 33.3 overs. As it turned out, the total proved to be enough to go for the kill.

Defending a modest score, Sangha bet on the right bowler to do the job for him. He got Lloyd Pope into the attack in the sixth over of England’s innings and the leg-spinner obliged his captain by drawing first blood in his second over when he had opener Liam Banks stumped.

The dismissal of Banks, who was a sleeping partner in a 47-run first wicket stand with Tom Banton, opened all floodgates as Pope turned almost unplayable. There was a time when it seemed Pope would pick up a wicket at each delivery as England batsmen were completely at sea and struggled to pick his variations.

After Pope sent back Banks (3), Harry Brook (0) and Will Jacks (1) to leave England in a bother at 51 for three, Banton and Wood (8) got together and repaired some damage by taking the score to 71 for three after 13 overs.

But the end of Banton’s cautious but aggressive 53-ball 59 also started the end for England as they lost their last seven wickets, five to Pope, for 25 runs in nearly 11 overs to be skittled out for 96 in 23.4 overs.

Apart from Banton, who hit seven fours and three sixes, wicketkeeper Jack Davies with 11 was the other England batsman to reach double-figures.

England captain Harry Brook conceded the pressure had got on to the team: “We played spin exceptionally throughout the tournament but he (Pope) bowled very well, got turn out of the pitch, there were a few bad shots. The pitch was fairly slow, when the spinners came on it turned, he got purchase out of it. The pitch was not bad really, we just did not bat that well, can’t say anything about the pitch, (there was) just a little turn.”

Pope said he always loves mixing his deliveries up and that he was expecting turn from the pitch.

“It’s an unreal experience. I love playing for my country whether I’m taking wickets or not, so going out there and doing it with some really good mates is an awesome experience. The pitch was probably conducive to spin. I was not really surprised to see the amount of turn, looking at their spinners turn a bit.

“I’ve always loved to bowl the wrong ones, from an early age when I started bowling spin. It is a big part of my game, I love bowling the variations, working on new things in the nets.”

Jason Sangha said he was confident that Pope could turn it around for his team.

“We get a leg-spinner who gets eight-for, it makes the job a lot easier. He is the kind of guy given the ball, he will get in the game. He had his day, that’s what the boy does, he is an exceptional bowler, he has got lots of variations. He really stepped up today in a high-pressure game.”

Boyagoda, who was out in the 45th over and missed out on a chance to become the first player to notch a double-hundred in U-19 cricket, helped his team complete a 311 runs victory, the joint-second biggest in U-19 cricket history along with Australia’s win over PNG earlier in the tournament.

In the other Plate quarter-final, the Windies defeated Ireland by four wickets, overtaking the opposition’s total of 278 with 10 deliveries to spare with Young (55 not out), Yadram (53) and Stewart (50) leading the run-chase.