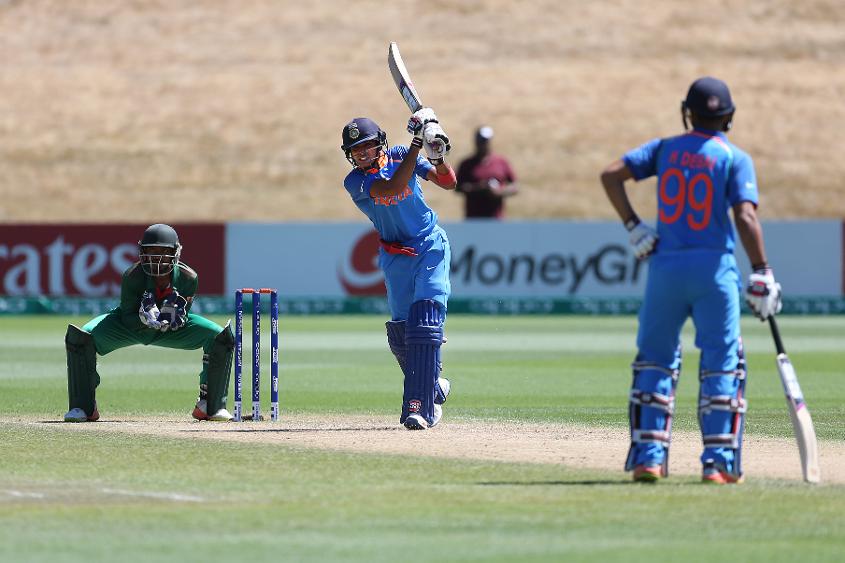 Shubman Gill produced a sublime innings of 86 as three-time champions India scored an impressive 131 runs victory over Bangladesh to set-up a semi-final clash with arch-rivals Pakistan at the ICC U-19 Cricket World Cup in New Zealand on Friday (January 26).

The No. 3 batsman’s 94-ball essay, in which he hit nine fours, helped India score a challenging 265 in the last Super League quarter-final in front of broadcast cameras at the John Davies Oval ground in Queensland.

India were all out in the last over and could not inflate the total as much as they would have liked to, but the score proved to be more than adequate as Bangladesh succumbed for 134 in 42.1 overs under a mounting asking run-rate, courtesy some tight bowling from the India fast bowlers in the early overs.

India’s spinners bowled tight lines and the fielding too was top-class with two direct-hit run outs in what completed a fine all-round effort that the Pakistan team would have observed keenly ahead of their semi-final at the Hagley Oval in Christchurch on January 30 (Tuesday).

India captain Prithvi Shaw credited his team for a good all-round effort. He said: “The fast bowlers and spinners executed our plans very well. It’s really good to pick up wickets in the power-plays. The plan was quite simple with our batting – look for the singles and rotate the strike. We had a good total on the board, so we decided to play with intensity and to remain in the game till the last wicket fell.”

Shubman Gill, who was later declared player of the match, said the intensity was more following their recent loss to Bangladesh. “We remembered our loss in the Asia Cup and so were determined to win the match today. As for the Pakistan game, we are looking forward to the match since we did not play them in the Asia Cup. We’re sure it will be a good match.”

Bangladesh captain Saif Hassan felt the slow batting early on spoilt their chances, saying: “Our approach was not good. We should have taken some calculated risks early on. After the first 10 overs, the middle-order had to take the risks and collapsed. If we had been positive early on, it would have been easier for our middle-order.”

India had lost to Bangladesh in the Asia Cup in November and looked determined to put it across the opposition this time around. They lost Manjot Kalra (9) fairly early but captain Prithvi Shaw (40, 54b, 5×4) and vice-captain Gill steadied the ship with an 86-run stand for the second wicket as the side reached the 100-run mark in the 17th over.

Shaw was bowled by a lovely delivery from Qazi Onik that moved away from leg stump towards off as it took the edge of the bat before hitting off stump. This was a big wicket for Bangladesh and the left-arm pace bowler continued the good work to finish with three for 48.

But Gill played on confidently to provide spine to the innings, while left-handed all-rounder Abhishek Sharma (50, 49b, 6×4) and Harvik Desai (34, 48b, 1×4) chipped in with useful scores down the order.

To their credit, Bangladesh’s bowling kept it tight in the mid overs through some fine off-spin bowling by Nayeem Hasan (two for 36) and captain Saif Hassan (two for 41) and the result was that India were bowled out in 49.2 overs in a bid to go for quick runs.

On the other hand, Bangladesh showed little urgency early on and never put themselves in a position to have a crack at the target.

Opener Pinak Ghosh scored 43 (75b, 3×4,) but they could neither get runs at a brisk pace nor keep wickets in hand. When Ghosh was dismissed by left-arm spinner Anukul Roy, the score was 76 for three in 23 overs.

New-ball bowlers Mukesh Mavi grabbed two for 27 and Ishan Porel, returning from injury after missing the previous two matches, conceded only eight runs off five overs to stifle the chase. Kamlesh Nagarkoti (three for 18) kept up the good work from the pace bowlers and the spinners supported well as Bangladesh lost the next seven wickets for 58 runs.

Opener Keagon Simmons (166, 137b, 17×4) slammed the fifth-highest score in the tournament as the Windies scored a facile 187 runs victory over Canada to reach the Plate final, in which they will play Sri Lanka in Christchurch on Sunday (January 28) at the Bert Sutcliffe Oval in Christchurch.