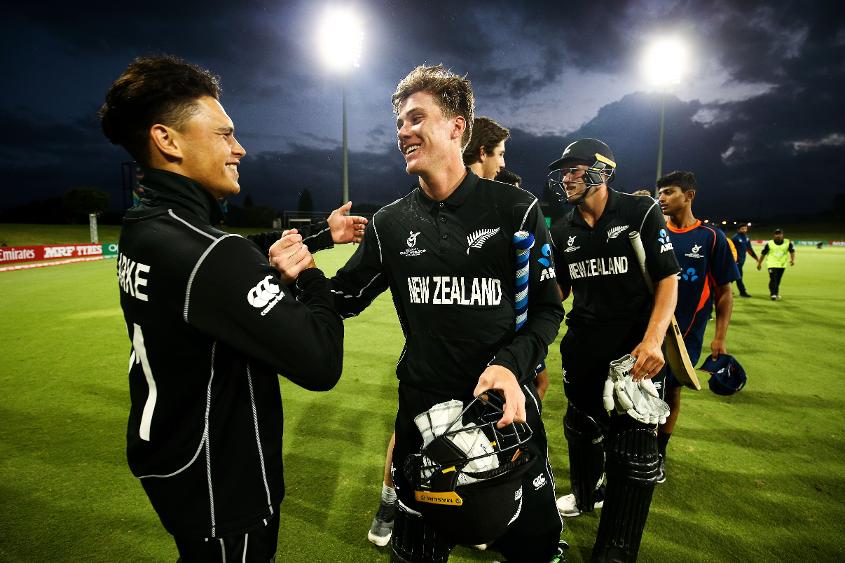 New Zealand started with a comprehensive eight-wicket win over defending champions Windies while Afghanistan pulled off a five-wicket win over Pakistan on the opening day of the ICC U-19 Cricket World Cup in New Zealand on Saturday (January 13).

Number three batsman Finn Allen, a second-timer at the U-19 CWC, was the star for the hosts with an unbeaten 115 in Tauranga while Darwish Rasool’s 76 anchored Afghanistan’s victory in Whangarei after a fine bowling effort by the Asia Cup champions.

On a day which saw four matches being played across three cities, Bangladesh and Zimbabwe also notched wins, though their matches in Christchurch were reduced to 20 overs per side owing to rain. Bangladesh defeated Namibia by 87 runs and Zimbabwe beat Papua New Guinea by 10 wickets.

The Windies had taken the early initiative after being put in to bat in the opening Group A match as Keagan Simmons compiled an unbeaten 92 and put on 123 runs with opening partner Kimani Melius (78). However, they were restricted by some tight bowling later on and could manage only 233 for eight.

In what was the first of 20 matches in this tournament being broadcast live by ICC TV, pace bowler Matthew Fisher grabbed three for 61 and spinners Rachin Ravindra (three for 30) and Felix Murray (two for 37) kept the Windies side on a tight leash.

“I thought the effort of the opening batsmen was not supplemented. I also thought we did not use the new ball well enough because we needed some early wickets,” Stewart said.

For Afghanistan, captain Naveen-ul-Haq struck with the new ball to reduce Pakistan to 23 for two after the two-time champions elected to bat in the Group D match. An 88-run third-wicket partnership between opener Rohail Nazir (81 off 105 balls) and Ali Zaryab (30 off 58 balls) steadied the ship but the 2004 and 2006 champions could not consolidate on the stand.

Medium-pace bowler Azmatulllah Omarzai and spinner Qais Ahmad grabbed three wickets each as Afghanistan showed that they are capable of upsetting leading sides and the team to watch from Group D, which also has Sri Lanka and Ireland.

Pakistan captain Hassan Khan praised the Afghanistan team, who have now beaten them three consecutive times after having also got the better of them two times in the Asia Cup in November, including in the final.

“They bowled and batted really well. They outclassed us in every department, especially in the first innings. The pitch was pretty good to bat on but the way they bowled was tough for us,” Hassan said.

Naveen-ul-Haq did not lend much importance to their third win over Pakistan.

“We have prepared well. We aren’t thinking of anything like we have beaten them thrice. It was just another game of cricket. We restricted them to under 200, so it was a good total for us to chase down.”

Bangladesh started with a comprehensive win in their bid to better their third-place finish as hosts last time, defeating Namibia by 87 runs in a Group C match reduced to 20 overs per side owing to rain.

Captain Mohammad Saif Hassan smashed 84 off 48 balls with three fours and five sixes to help post a huge 190 for four. Naim Sheikh also chipped in with 60 and the opposition were buried under the pressure of a huge target even though all-rounder Eben van Wyk got a half-century.

Zimbabwe scored a 10-wicket win over Papua New Guinea in another match that was reduced to 20 overs a side.

They restricted Papua New Guinea to 95 in the opening Group B match and then got to the target with six overs to spare. Wesseley Madevere grabbed three for 19 with his off-spin bowling and then made a brisk 53 not out to be named player of the match. His opening partner Gregory Dollar remained not out on 48.

Player of the match: Darwish Rasool

Bangladesh beat Namibia by 87 runs in a Group C match at Bert Sutcliffe Oval, Lincoln, Christchurch (20 overs per side)

New Zealand beat Windies by eight wickets in a Group A match at Bay Oval, Tauranga

Player of the match: Finn Allen

Zimbabwe beat Papua New Guinea by 10 wickets in a Group B match at Lincoln No. 3, Christchurch (20 overs per side)

Zimbabwe 98 for no loss (Wesseley Madevere 53 not out, Gregory Dollar 48 not out)

·       Group A comprises the Windies, New Zealand, South Africa and Kenya; Group B is formed by Australia, India, PNG and Zimbabwe; Group C consists of Bangladesh, Canada, England and Namibia; Group D comprises Pakistan, Sri Lanka, Afghanistan and Ireland
·       According to the event format, the top two sides from each group will advance to the Super League while the remaining eight teams will figure in the Plate Championship. The preliminary round matches will be followed by quarter-finals, semi-finals and finals, plus the play-offs.