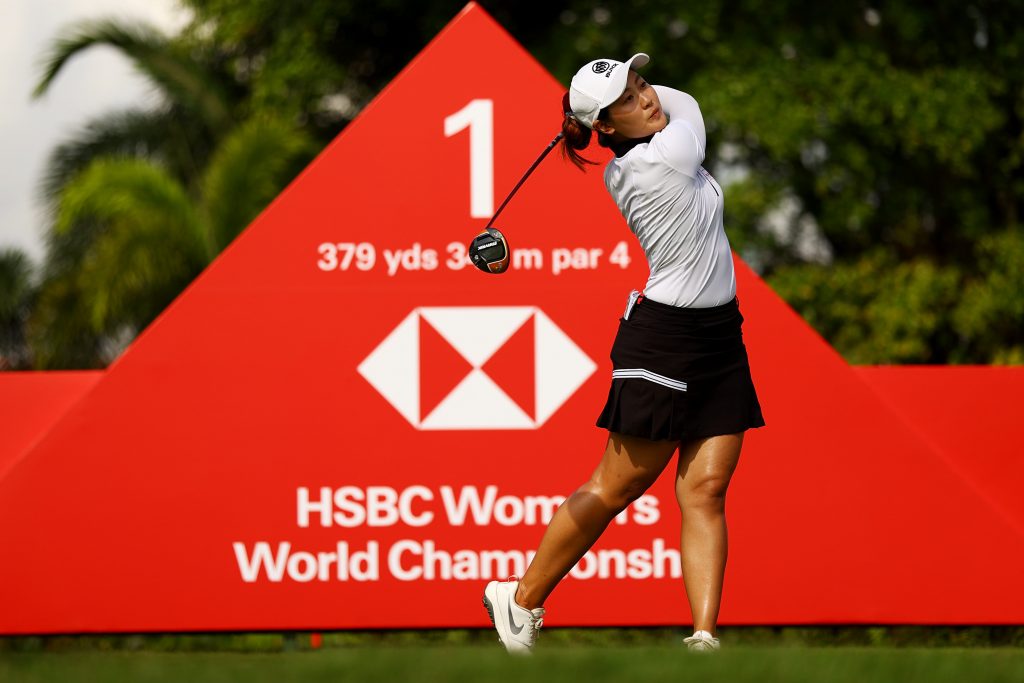 Xiyu Lin’s quest for a maiden LPGA Tour victory received a major boost in round three of the HSBC Women’s World Championship after the 25-year old Chinese player took a one-shot lead into the final round at the Sentosa Golf Club on Saturday, May 1, 2021.

On a day that saw several players jostling for the lead, her round of five-under 67, including a birdie finish, leaves her in prime position to make the career breakthrough she’s been looking for. “Well, I wasn’t really paying attention to the leaderboard because to me, the front nine was a little sketchy. I made two three-putts, some weird mistakes and tend to leave some birdie putts short,” she said.

“So, going into the back nine, which I thought was the tougher nine, I didn’t really expect to play that well, but I also knew there are still lots of opportunities, so just needed to stay really patient. I mean, the last couple holes was pretty unreal.”

At 14 under, it will be the first time that Lin, who benefited from a sponsor invitation to compete in the tournament earlier in her career and is a graduate of the CGA-HSBC China Junior Golf programme, leads going into the final round of an LPGA tournament. Looking ahead to Sunday, she said: “I’m going to try my best to enjoy every minute of it, and hopefully I learn something, and I bring something out of it.”

One shot back are Hannah Green and overnight leader Inbee Park. The Australian shot a second consecutive round of 66, including an eagle on the par-four 10th, to bring herself right into contention on Saturday. Green, who is in search of a third LPGA Tour victory, said: “I probably didn’t hit the ball as well as yesterday, but I played, I guess, pretty well and made sure I missed it in the right places. Had a couple of bogeys out there today, which were not really that soft. They were probably good bogeys, so hopefully tomorrow I can continue to keep making birdies like I have been.

“It is a different feeling when you just get to play the weekend in general, but I tried to stay aggressive out there. Obviously, Inbee is a great player and (has) won so many tournaments, so it’s going to be hard to keep chasing her, but I’m excited for tomorrow.”

Having led for the first two rounds of the tournament, Inbee Park was looking imperious on the front nine holes, picking up four birdies before the turn. But bogeys on the 11th, 14th and a double on the 16th where she found the water, stalled the Korean’s progress as she looks to claim the title for a record third time.

“I played great on the front nine but just bad on the back nine,” she said. “It looked like two different rounds, and obviously, I could have done better on the back nine. But it was a little bit disappointing, especially 16, making a double. That just means I’ve got to work harder tomorrow.

“I still have an opportunity. That’s what really matters, and I’ll just go out there tomorrow and try to go low.

“It was a great birdie on No. 18. That probably (gives me) a chance to win tomorrow, so I think that was really huge. Tomorrow obviously we have a lot of girls in the top. It’s going to be a shootout, whoever plays good tomorrow is going to win.”

Gaby Lopez of Mexico carded the low round of the day with a seven-under score of 65 and enjoyed the clubhouse lead in the closing stages of the day. Twice a winner on the LPGA Tour, she will also see this as a golden opportunity to add another championship to her record.

“I didn’t set up a number in my mind, honestly. The goal was to be fearless. Was to be just as strong mentally as possible and not let one mistake take my confidence away, because we are going to make mistakes, and I felt a little down on one of the putts that I missed, very short, but I told myself that I’m going to miss and I’m not going to let one mistake take my confidence away,” said Lopez.

Two shots further back at 10 under are Koreans In Gee Chun and So Yeon Ryu, who are tied in fifth place alongside Lydia Ko. Ko, who has looked consistent all week, gave the sponsor’s guest plenty to cheer about when she eagled the 18th, ricocheting in off Green’s ball.

Joint overnight leader Hee Young Park’s hopes of a fourth tour win were dealt a cruel blow when she twice found the water on the par-five 16th, resulting in a quadruple bogey. The South Korean signed for seven-over 79.

Fans in Singapore will be able to watch five hours of live coverage each day on Hub Sports and Channel 5, as well as via the tournament’s Livestream on Facebook. Additionally, real-time updates will be available at https://www.hsbcgolf.com/womens/ and tournament social media #HWWCGolf.

For more information on the HSBC Women’s World Championship, which takes place from Thursday 29 April to Sunday 2 May, and all the latest news, visit the tournament website at https://www.hsbcgolf.com/womens