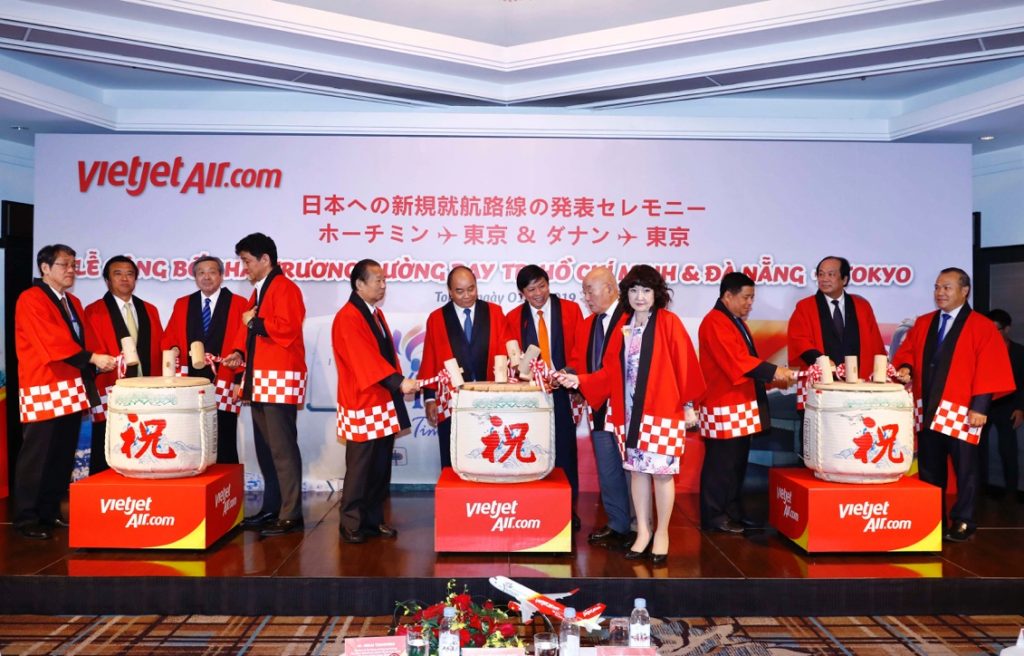 High-ranking Vietnamese and Japanese officials along with Vietjet’s leaders at the ceremony which announced Vietjet’s new routes.

During a visit to Japan for the G20 Summit 2019, Vietnam’s Prime Minister  Nguyen Xuan Phuc, along with other Vietnamese dignitaries, attended Vietjet’s ceremony to launch two new routes connecting Vietnam and Japan.

The Da Nang – Tokyo (Haneda) route will operate daily return services beginning on 26 October 2019. With a flight time of approximately five hours and 30 minutes per leg, the flight will depart Da Nang at 6.10 pm and land in Tokyo at 1 am. The return flight will depart from Tokyo at 2.30 am and arrive in Da Nang at 6.40 am. All are in local times. 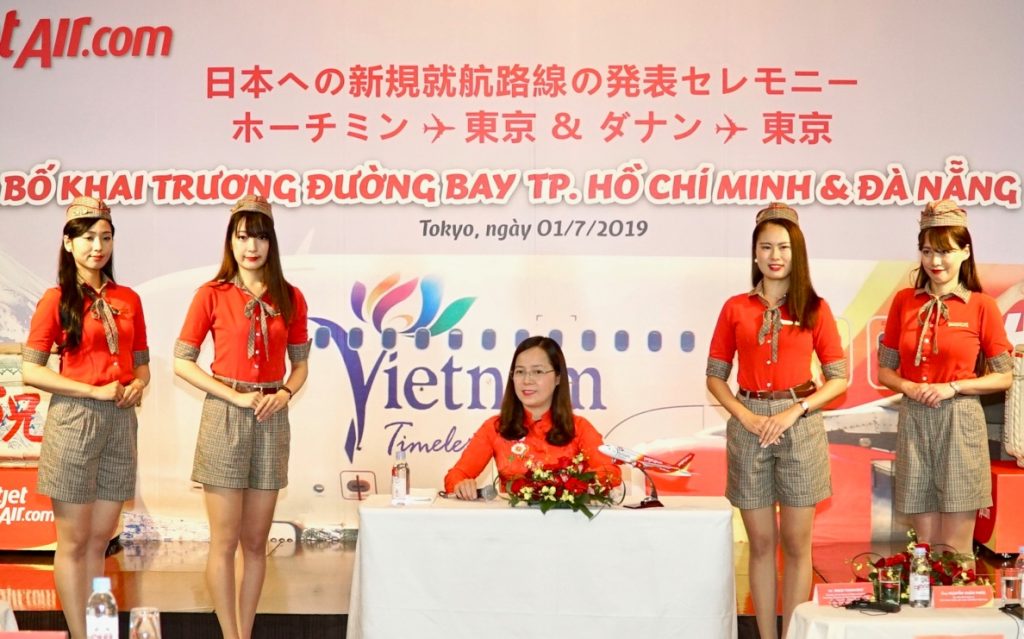 Mr Nguyen congratulated Vietjet and said: “Vietjet has just been established for a few years but has developed rapidly, with a good record of safety and increasingly high-quality services. With the expansion of international and domestic flight networks together with its new and modern fleet, Vietjet will become a strong carrier in the region. I would like to also congratulate Vietjet on becoming an official member of the Keidanren – Japan Business Federation (Japan), which is an important milestone for not only Vietjet but also Vietnamese businesses in general.”

Speaking at the ceremony, Vice-President of Vietjet, Nguyen Thi Thuy Binh said: “The rapid expansion of Vietjet’s flight network to Japan will help the people of the two countries have more options for their sight-seeing travels and business trips. In the coming days, we will continue to offer more flying opportunities to all local and international travellers, as well as more exciting experiences on the flights connecting the two countries. Passengers will in turn enjoy travelling on board the new aircraft while being served delicious and hot inflight meals from our dedicated and friendly cabin crew, as well as being able to enjoy many exciting in-flight entertainment choices.

Also attending the ceremony in Tokyo were Japanese dignitaries and partners, including Mr Nikai Toshihiro, Secretary-General of the Liberal Democratic Party and President of the Japanese-Vietnamese Parliamentary Alliance, and Ms Satsuki Katayama, Minister of State for Regional Revitalisation, along with other representatives of Japanese tourism authorities.

Mr Nikai said: “I would like to congratulate Vietjet on launching the two new routes, proving the two countries’ close relationship. It can be said that tourism plays an important role in developing the relationship between the two nations. I hope Vietjet will continue to contribute more and more and that Japanese aviation agencies will give much more support for the airline’s development.”

During the ceremony, Vietjet leaders also received an official membership certificate from the Japan Federation of Economic Organizations (Keidanren). Vietjet is one of the few foreign enterprises and the first low-cost carrier in the world to join the biggest comprehensive economic federation in Japan, comprising of around 1,500 members, including leading companies in Japan, national industrial associations, and regional economic organisations.

Vietjet is the first airline in Vietnam to operate as a new-age airline offering flexible, cost-saving ticket fares and diversified services to meet customers’ demands. It provides not only transport services but also uses the latest e-commerce technologies to offer various products and services for consumers.

Vietjet is a fully-fledged member of International Air Transport Association (IATA) with the IATA Operational Safety Audit (IOSA) certificate. Vietjet was named “Best Ultra Low-Cost Airline 2018 – 2019” and awarded the highest ranking for safety with 7 stars in 2018 and 2019 by the world’s only safety and product rating website AirlineRatings.com. The airline has also been listed as one of the world’s 50 best airlines for healthy financing and operations by Airfinance Journal in 2018.