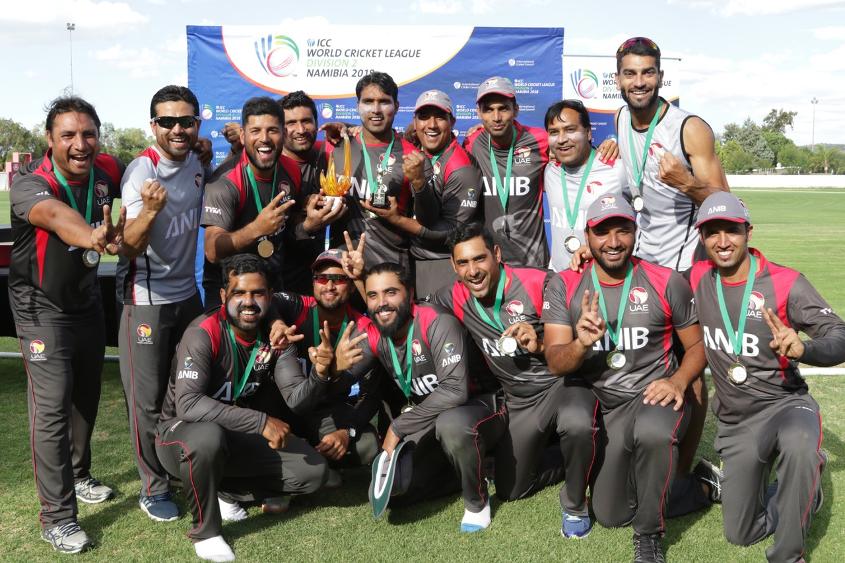 The United Arab Emirates were crowned the ICC World Cricket League Division 2 champions in Windhoek, Namibia, on February 15 as they beat Nepal by seven runs.

The UAE will now join the Windies, Ireland, the Netherlands and PNG in group A at the ICC Cricket World Cup Qualifier in Zimbabwe, whilst Nepal will take the remaining spot in group B alongside Afghanistan, Hong Kong, Scotland and Zimbabwe.

The UAE won the ICC World Cricket League Division 2 by defeating Nepal by seven runs in an exciting end to a thrilling tournament in Windhoek.

The UAE batting order all played their part, but Ashfaq Ahmed’s century (114, 123b, 10×4, 3×6) was the best performance. Captain Rohan Mustafa (51), Rameez Shahzad (41 not out) and Shaiman Anwar (40) all chipped in with important runs. Sandeep Lamichhane (1-39) was once again the best bowler for Nepal. The UAE finished their innings on 270 for eight after their 50 overs.

In reply Nepal had their own century maker, captain Paras Khadka (112*, 103b, 3×4, 8×6), who almost led Nepal over the line again in another close match. His heroics – which earned him the title of most runs in the tournament at 241 runs –  supported by Dipendra Airee (35) and Sharad Vesawkar (30) were not quite enough as they fell eight runs short from victory.

The UAE’s Amir Hayat took four wickets for 53 runs. Nepal’s Sandeep Lamichhane for his 17 wickets for 176 runs in the tournament was awarded the Player of the Tournament.

Namibia’s batsmen all got starts with only LP van der Westhuizen (53, 54b, 5×4, 2×6) going on to get a half century. Gerhard Erasmus’ innings of 42 runs and Stephan Baard’s 29 were not enough to chase down Canada’s target. Canada’s Saad Bin Zafar (3 wickets for 40 runs) did the damage as the North American side won by 49 runs and secured third place.

Oman’s reply centred on Khawar Ali’s 112  not out (142b, 11×4). VS Wategaonkar 67 and Zeeshan Maqsood (33) chipped in with runs as Dhiren Gondaria was the pick of the Kenyan bowlers with two wickets for 17 runs.