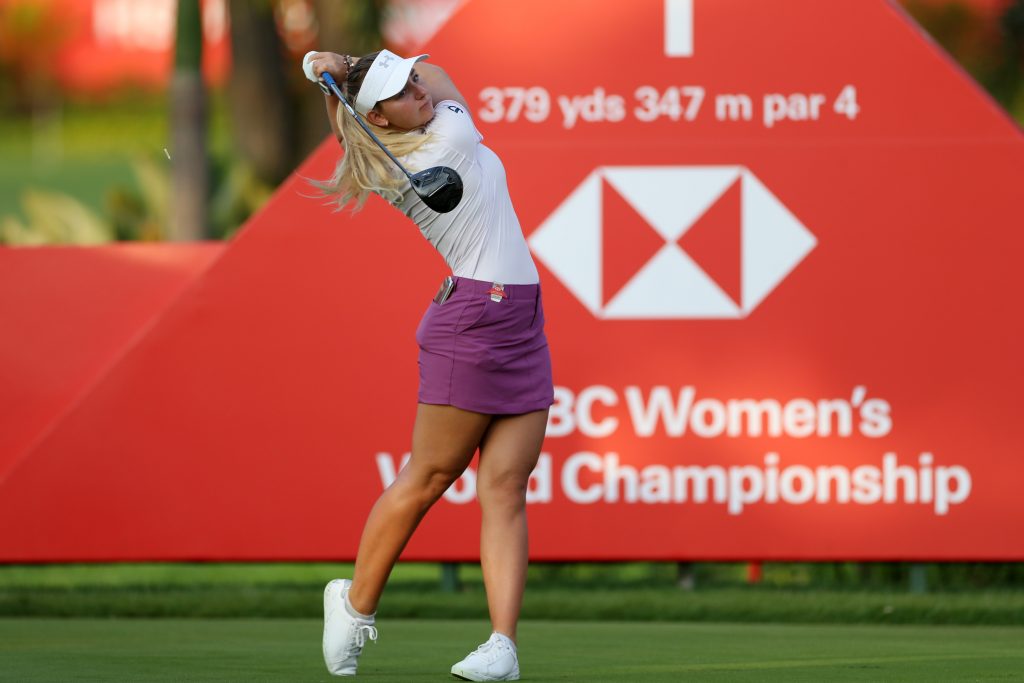 Emily Kristine Pedersen of Denmark hits her tee shot on the 1st hole during the first round of the HSBC Women’s World Championship at Sentosa Golf Club on April 29, 2021 in Singapore. Photo by Lionel Ng/Getty Images.

Recognised for bringing together the best players from around the world, this year’s HSBC Women’s World Championship will see the winners from three of the major international women’s golf tours touch down in Singapore next week, ahead of the 3 – 6 March event at Sentosa.

Danielle Kang, Lydia Ko and Leona Maguire, winners from the first three LPGA Tour events of the year, will all feature in the 66-player line up, as will Esther Henseleit, winner of the first event on the Ladies European Tour (LET) schedule, together with Hannah Green, winner from the WPGA Tour of Australasia-sanctioned Vic Open.

All five are regular LPGA Tour players with Ko (2015), Kang (2018) and Green (2021) sharing the accolade of having finished runner-up in the tournament often referred to as ‘Asia’s Major’. The trio will be looking to draw on their depth of experience to go one better this year. Meanwhile Maguire and Henseleit will be making their tournament debuts in the Lion City. 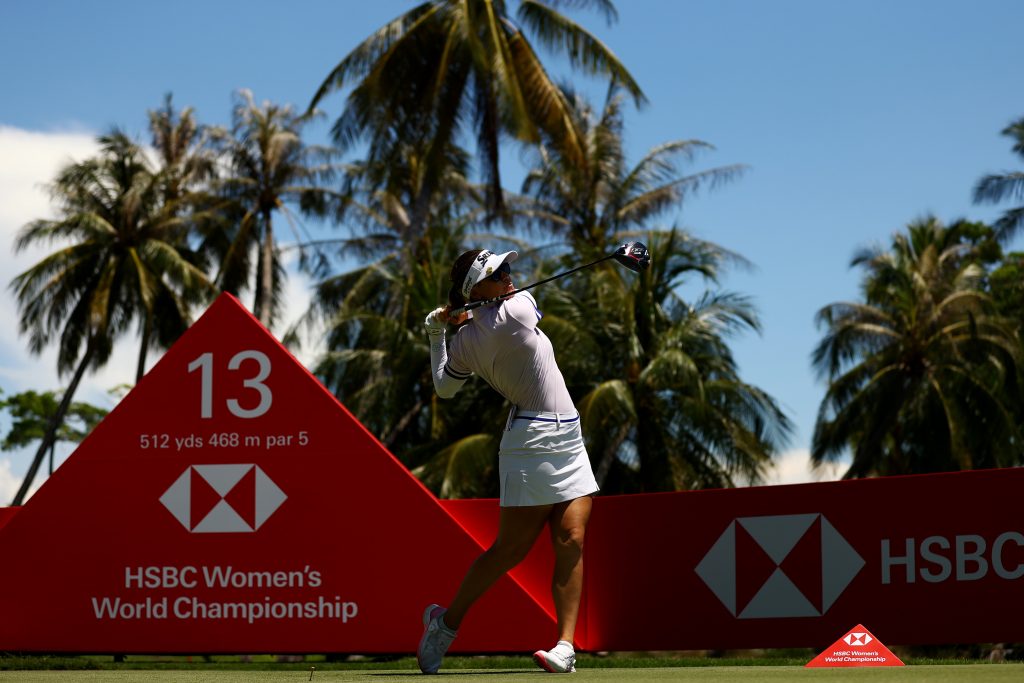 Hannah Green of Australia plays her shot from the 13th tee during the final round of the HSBC Women’s World Championship at Sentosa Golf Club on May 02, 2021 in Singapore. Photo by Yong Teck Lim/Getty Images.

McGuire, whose victory at the LPGA Drive On Championship earlier this month was her first on Tour, said: “I’m really looking forward to playing in Singapore. It’s one of the big events on Tour that everyone talks about and am just really really pleased that I made the field. I had a couple of close finishes last year before getting off to the perfect start this month so really hope I can take that form to the HSBC Women’s World Championship. Look forward to seeing you there!”

Green, who came tantalizingly close to lifting the silverware at Sentosa last year, said: “I really enjoyed last year’s event in Singapore, and was pleased to give myself a chance to win on the final day.   This event is lovely, and Singapore is one of the favorite destinations on our calendar.  I took some time out over Christmas and was thrilled to win in Australia at the Vic Open, which hopefully sets me up well for the LPGA season.  I’m looking forward to starting my LPGA season here and hoping to keep it going.” 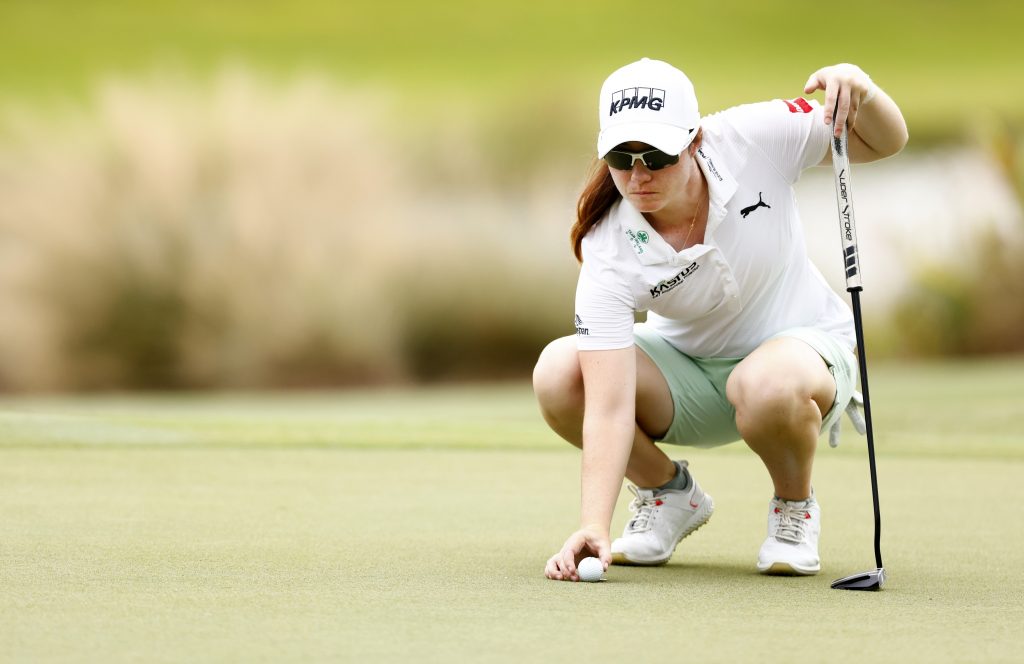 Leona Maguire of Ireland lines up a putt on the 16th green during the third round of the CME Group Tour Championship at Tiburon Golf on November 20, 2021 in Naples, Florida. Photo by Michael Reaves/Getty Images.

Meanwhile, Hinako Shibuno and Momoko Ueda of Japan, Xiaowen Yin of China, Emily Pedersen of Denmark and Singapore’s Sock Hwee Koh will join the elite field challenging for the prestigious HSBC Women’s World Championship trophy when the showpiece tournament gets underway next week.

The five will take their place in the field on account of their promising talent and continued contribution to the game, courtesy of an invitation from tournament sponsor HSBC.

Known as the Smiling Cinderella, Shibuno shot to fame following her win at the 2019 AIG British Women’s Open, in what was her first start outside her home country of Japan. She became Japan’s first major winner in 42 years and has played in 18 LPGA Tour events since. Now in her rookie year, the 23-year-old will be looking to post a good first result as an LPGA Tour card holder. 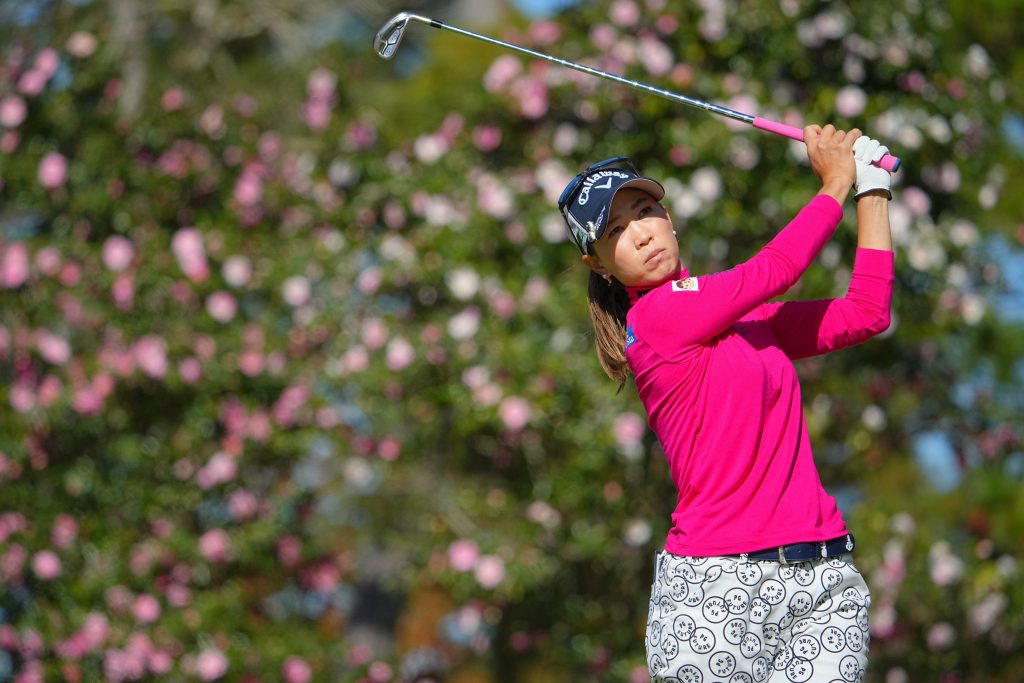 Momoko Ueda of Japan hits her tee shot on the 8th hole during the third round of the JLPGA Tour Championship Ricoh Cup at the Miyazaki Country Club on November 27, 2021 in Miyazaki, Japan. Photo by Yoshimasa Nakano/Getty Images.

Compatriot Momoko Ueda made her LPGA Tour debut in 2008 and has twice won the LPGA Tour-sanctioned Mizuno Classic in 2007 and 2011. Now 35 years old, Momoko is making her first appearance in the HSBC Women’s World Championship since 2013.

Ueda said: “I am appreciative of the invitation to play in this year’s HSBC Women’s World Championship. This will be the first tournament of this season for me. It is exciting to be back to Sentosa Golf Club since 2013, taking part with the talented players of the world.”

Xiaowen Yin is a 16-year-old amateur from China who recently finished second at Stage II of LPGA Q-school but could not advance as she did not meet the LPGA’s minimum age requirement. Currently ranked 8th on the World Amateur Golf Ranking, Xiaowen created her own piece of history in 2021 when she became the youngest-ever three-time champion on the China LPGA Tour. Winner the 2021 Women’s Sunshine State Amateur in Florida last November, the prodigious young talent will be one to watch for the future.

Yin said: “Thank you to HSBC for the chance to play in Singapore. The support they have given to us younger Chinese golfers over the years has been amazing and I’m really appreciative. This is an wonderful opportunity for me and one I’m really looking forward to it and to see how my game compares to the top players. Thank you!”

Emily Pedersen has won five titles on the Ladies European Tour and in 2020 finished first on the LET order of merit, Race to Costa del Sol. Tied in 5th place on her Olympic debut at the 2020 Tokyo Games, she has also represented Europe twice in the Solheim Cup in 2017 and on the winning side in 2021.

The final sponsor invitation goes to Sock Hwee Koh following her two-stroke victory in the HSBC Women’s World Championship National Qualifying Tournament earlier this month. Playing at her home club, this will be her fourth appearance in the tournament.

Jonathan Castleman, Managing Director – Global Head of Brand and Brand Partnerships at HSBC, said: “As a long-term supporter of the game, HSBC is committed to opening up the world of golf and creating a pathway for the best young players from the Asia-Pacific region to compete on a world stage. The combination of the talent these players have shown and the manner in which they have conducted themselves matches our ambition to help grow the game at all levels and attract new audiences. We look forward to seeing them all in action on The Tanjong next week and we wish them the very best of luck for the tournament.

“Congratulations in particular to Sock Hwee on a fantastic performance in the HSBC Women’s World Championship qualifier. She takes her place in one of the most competitive fields in golf on pure merit and I’m sure will have the support of the nation behind her. We wish her the very best of luck as she returns to familiar surroundings at Sentosa to take on the world’s best players.”