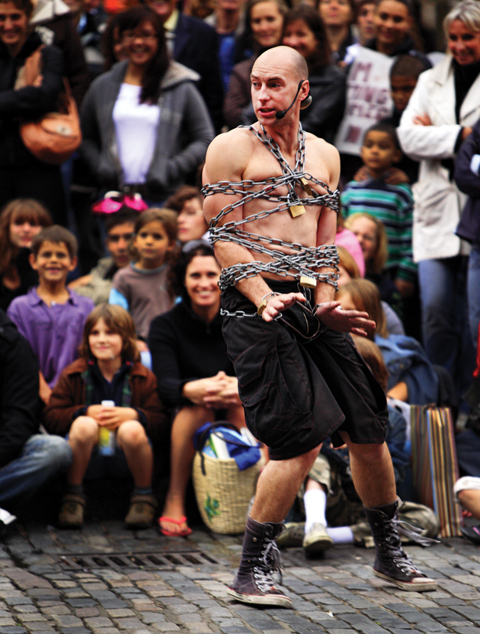 Clad in a black shirt and blue jeans and downing a Magners at McGettigans in Clarke Quay, Rob Roy Collins exudes casual friendliness and forthrightness. It is vastly different from the image of a lawyer he once aspired to be.

The 40-year-old has no regrets that he did not pursue a career in the law business after graduating with a degree in law from the University of Liverpool in England and German law from the Humboldt University of Berlin. At the age of 24, the Englishman back-packed to Australia and spent a summer busking there. He then realised that he wanted to be a street performer and followed up on his interest doggedly.

Today, he is one of the top escapologists in the world. And, after more than a decade entertaining people around the world, he will be bringing his chain of tricks to Singapore and performing at the Singapore Festival of Fun in March.

“I was a good track and field athlete,” said Rob. “I could have become a top athlete (he was a national junior pole vault champion) or a lawyer. But I wanted to do what I liked, and that was entertaining people. So, I decided to become a street performer. My dad was upset because he sent me to public school. My mother encouraged me but she was sceptical. But, today, after seeing so many of my shows, they are happy that I chose a profession that brings so much joy to me.”

The beginning was not easy for the Newcastle-born Geordie. He got a few tips from noted escape artists but had to learn most of the tricks on his own. He bought chains, padlocks and hand-cuffs and religiously practised the art of escapology till he mastered it. “In the beginning it took me two hours to escape from chains that bound me tightly,” he said. “Gradually I narrowed it down to 20 minutes. Now I can do so in two minutes.”

The most famous act he does now is escaping from the top of a ladder in quick time. His speciality is giving his own modern twist to some of the most iconic, classic escapes, such as being bound, suspended and upside-down. He has done acrobatics, hand stands on chairs and other intricate tricks on the street and at festivals in many cities around the world. He is also a regular at Covent Garden in London, one of the most famous venues for street performances in the world.

On August 11, 2011, he nearly entered the Guinness Book of World Records when he escaped from a strait jacket while hanging by his ankles from a helicopter in a flight over Niagara Falls in St Catharines, Canada. The stunt served as a kick-off to the St Catharines International Busker Festival.

“It was much bigger than anything I had done before,” said Rob. “There were obviously elements of risk. The safety had to be perfect and the pilot (Ruedi Hafen of Niagara Helicopters) had to be skilled. Nothing could be left to chance as, left too long hanging upside down, I risked blacking out.”

In the end he pulled off the stunt. “I was nervous and it was tough,” he said. “I was upside down and the blood got into my head. My stomach was also upside down which meant I could not eat for hours later. But it gave me immense satisfaction that I could do it and make the crowd (of about 400) happy.”

Rob though that he had achieved a world record. But, unfortunately, the event was not documented, and so it could not be considered legitimate. The following year, he again attempted to set the record, flying to Canada with the Guinness Book of World Records’ legendary Marco Fregatti in tow. But, again, luck was not on his side. The Canadian authorities decided that for reasons of health and safety he would not be allowed to use a helicopter.

Though he was devastated, Rob came up with a plan: Hung upside down from a crane, he would escape from a soaking wet, heavy strait jacket. However, once again, he failed to set a record. The wet jacket became so stiff that he could not wriggle himself out of it. In struggling to do so, he passed out, and the stunt had to be stopped.

However, his then-fiancee Louise came up with a solution: Wrap him in six rolls of cling wrap. This time, he successfully managed to get out of the wrap and set a world record which, in the words of Marco “was officially amazing”.

“To succeed in this profession, you have to think on your feet,” said Rob, who makes a decent living from it. “You have to be performing every weekend, otherwise you will get rusty. You also have to constantly train and upgrade your acts. It is difficult but a lot depends on psychology, building hype and excitement. You have to take an empty place and turn it into 400 people cheering. Houdini was all about psychology.”

The biggest crowd that Rob has attracted is about 700 at the busker festival in Ottawa, Canada, last August. He expects at least 250 people to watch each of his 10 shows at the Clarke Quay StreetFest in Singapore in March when he will be doing his famous ladder escape act, acrobatics, hand stands, throwing jokes and interacting with the crowd.

Combining comedy, escapology and acrobatics, Rob’s show is a perfect blend of laughter, danger and excitement.

Azariah Tan: Bravely pursuing his passion
Zhambyl Zhabayev: A Poet of the Steppes
To Top