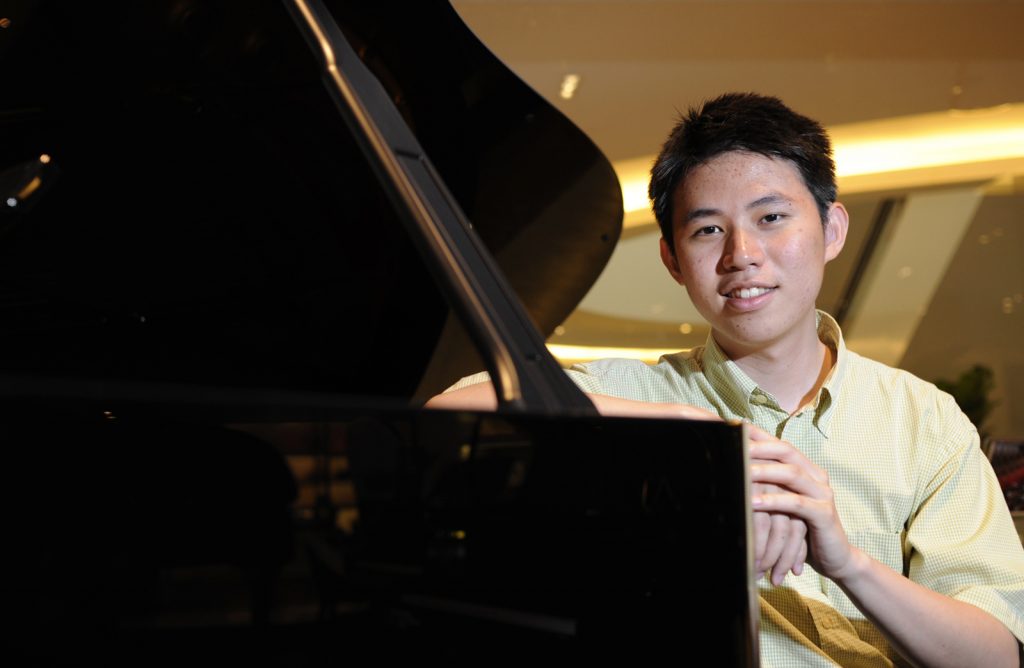 It may sound like a contradiction, but pianist Dr Azariah Tan’s hearing impairment has made him a better player.

“Many people often say that I really listen to what I’m playing,” he said, in a feature piece published in The Straits Times. “A lot of people just play the piano for the sake of playing it but they don’t put enough emphasis on listening to what sounds are coming out. While I can’t hear everything, it makes me strive to listen to everything. It makes me listen more closely and respond to it.”

Diagnosed with congenital bilateral sensorineural hearing loss – a condition that has left him with only about 15 per cent of his hearing – at the age of four, Azariah, who will be performing at the True Colours Festival in Singapore from March 23-25, has always bravely pursued his passion and career in music. Starting with keyboard lessons at the age of five, he went on to achieve Grade Eight when he was 13, skipping a couple of grades. His teachers also discovered that he had perfect pitch.

The only child of a former sound engineer and a university lecturer, who home-schooled him up to university, the National Arts Council-Conservatory scholar now has a doctorate in Piano Performance and a double masters in Music from the University of Michigan. Azariah, who would eventually become deaf, also previously graduated with first-class honours in Music from the Yong Siew Toh Conservatory of Music.

The 26-year-old has also received multiple full scholarships from the University of Michigan, the National Arts Council of Singapore, the Yamaha Music Foundation of Japan and from prestigious music festivals such as the Kirishima Music Festival in Japan and the Gilmore International Keyboard Festival in Kalamazoo, Michigan.

Earlier in 2017, he was announced as the latest recipient of the Paul Abisheganaden Grant. The prize, in memory of Singapore music pioneer and Cultural Medallion recipient Paul Abisheganaden, is awarded to NUS students and alumni who have made significant contributions to the performing arts.

Azariah, who also conducts workshops and masterclasses worldwide, has competed and performed in various festivals and competitions worldwide. A first-prize winner in competitions such as the 2010 Bradshaw and Bruno International Piano Competition, the American Prize 2012 and the 2009 National
Piano and Violin Competition in Singapore, Azariah has performed at the John F. Kennedy Center as one of the four recipients of the VSArts International Young Soloists Award, as well as at the Shakespeare Lansburgh Theatre in Washington DC as a guest artiste of VSArts.

He has also performed with the Polish Silesian Philharmonic Orchestra in Japan, the Singapore Symphony Orchestra and the world-renowned pianist Kevin Kern at the Esplanade Concert Hall.

Azariah has admitted, in an interview, that his hearing impairment can be frustrating at times. Specifically, he pointed out that hearing aids cannot differentiate between noises and voices as well as human ears can.

“It can also be especially frustrating not being able to differentiate musical sounds and, more importantly, the subtlety of sounds. I have to imagine them and hear them in my head,” he said. He is holding out hope that researchers may one day discover a way to reverse his impairment.

“But, even if not, I try to view what I have as a gift and I try to make the most of it while I still have some hearing left.”