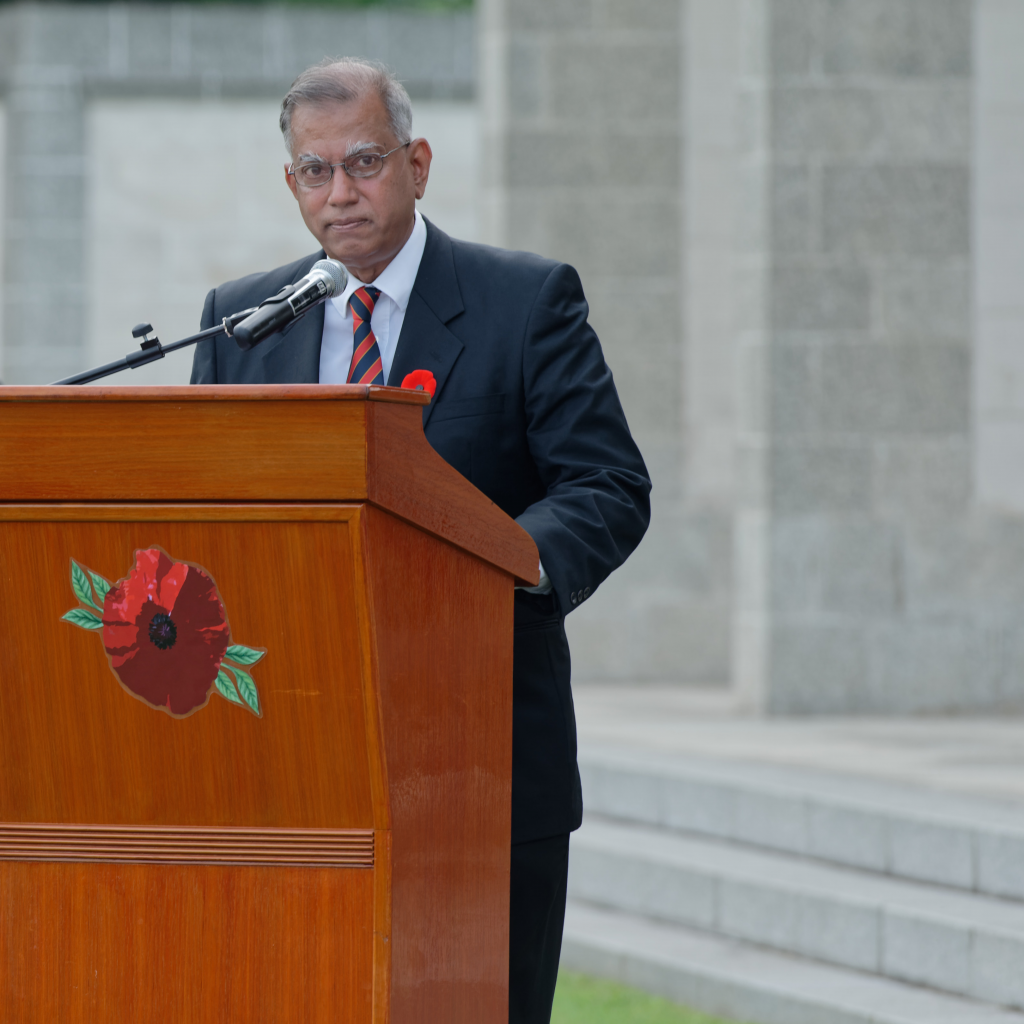 Mr Jeya Ayadurai giving a speech at the commemoration ceremony for the 80th Anniversary of the Fall of Singapore on 15 February 2022. PHOTOS: Singapore History Consultants Pte Ltd

Mr Jeya Ayadurai – Singapore historian and heritage entrepreneur – is now on an exclusive list populated by only a handful of his countrymen: the prestigious Honorary Member of the Most Excellent Order of the British Empire (MBE).

The honour was conferred upon the 61-year-old during the Queen’s Platinum Jubilee in June 2022, celebrating the British monarch’s historic 70-year reign.

Mr Ayadurai was recognised for his services to preserving Singapore, British, and Commonwealth military history and war remembrance in Singapore. The Queen confers this award on non-British citizens around the world who have made significant contributions to advance Commonwealth and British interests.

In getting the award, Mr Ayadurai joins not more than 10 Singaporeans in the nation’s post-war history who have received the MBE. Past recipients of British honours include Lee Kuan Yew (GCMG), Elizabeth Choy (OBE) and Paul Abisheganaden (MBE).

Mr Ayadurai dedicates the award to Singapore and his team who have worked tirelessly to uncover and highlight Singapore heritage, including its military past.

A Passion for Singapore Heritage

Mr Ayadurai, on his return to Singapore in 1988, joined the Department of Strategic Studies in the Singapore Command and Staff College as a military history lecturer. In 1995, he began the first of many private sector heritage firms – Singapore History Consultants Pte Ltd, to focus on local history and heritage. 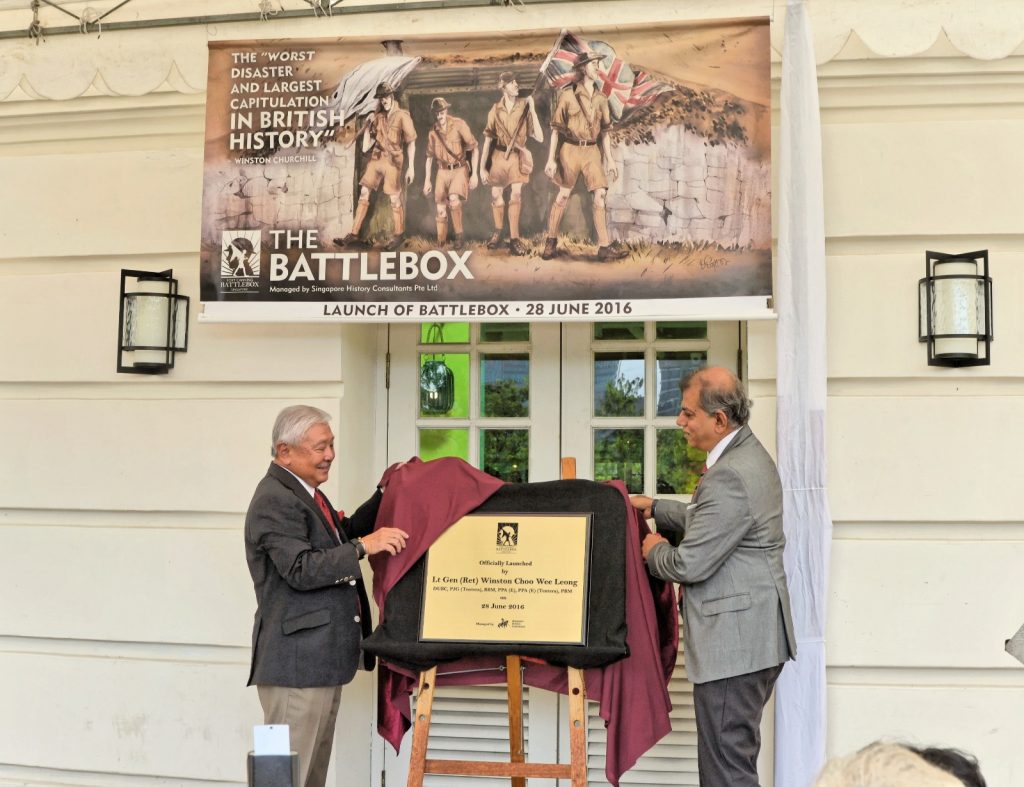 Unveiling of a plaque commemorating the Official Launch of the Battlebox by Guest-of- Honour Lieutenant-General (retired) Winston
Choo and Battlebox Director Mr Jeya Ayadurai on 28 June 2016.

Since then, he and his team have created several associate firms such as Journeys Pte Ltd, Haw Par Villa Pte Ltd and The Changi Museum Pte Ltd. These firms not only undertake primary research and programme development, but also manage significant heritage sites in Singapore today.

“We are dedicated to educating Singaporeans and the world about Singapore history and conserving Singapore heritage for future generations,” Mr Ayadurai said. “However, I also recognise that history must be inclusive. Singapore history includes a shared history with Britain and the Commonwealth, and any telling of our history must not exclude other countries who were joint participants with us, particularly in regards to the Second World War.”

This philosophy has shone through in his relentless efforts to promote a Culture of Remembrance in Singapore. For more than 25 years, he has tirelessly organised and called for Commemoration Ceremonies to mark important war anniversaries and remember the millions who had sacrificed their lives for peace. 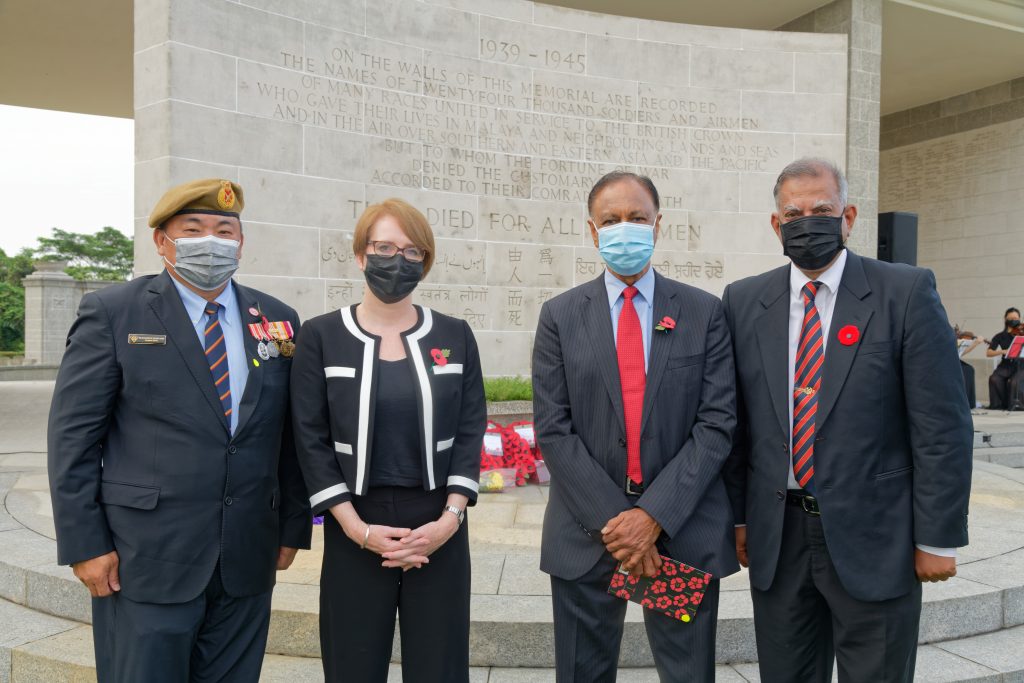 From left: President of the SAF Veteran’s League, Brigadier-General (NS) Winston Toh; British High Commissioner, HE Kara Owen; Guest-
of-Honour Mr Dileep Nair and Mr Jeya  Ayadurai at the commemoration ceremony for the 80th Anniversary of the Fall of Singapore on 15 February 2022.

From 2015, these Commemoration Ceremonies were the first in the world to bring together former World War II combatants such as Singapore, Japan, and the Commonwealth countries in a united message of hope for peace. Subsequently, the Japanese Embassy has been included in commemoration committees organising war
remembrance ceremonies in 2017, 2020, and the latest in 2022 for the 80th Anniversary of the Fall of Singapore. These ceremonies show that it is possible for former combatants to come together to honour the war dead, and are an example for nations around the Pacific, particularly in Northeast Asia, to emulate.

For almost three decades, these companies have made immense contributions to Singapore heritage. These include research projects, school heritage trails (later known as Learning Journeys) which were pioneered by SHC in 1995, and various educational programmes and events. 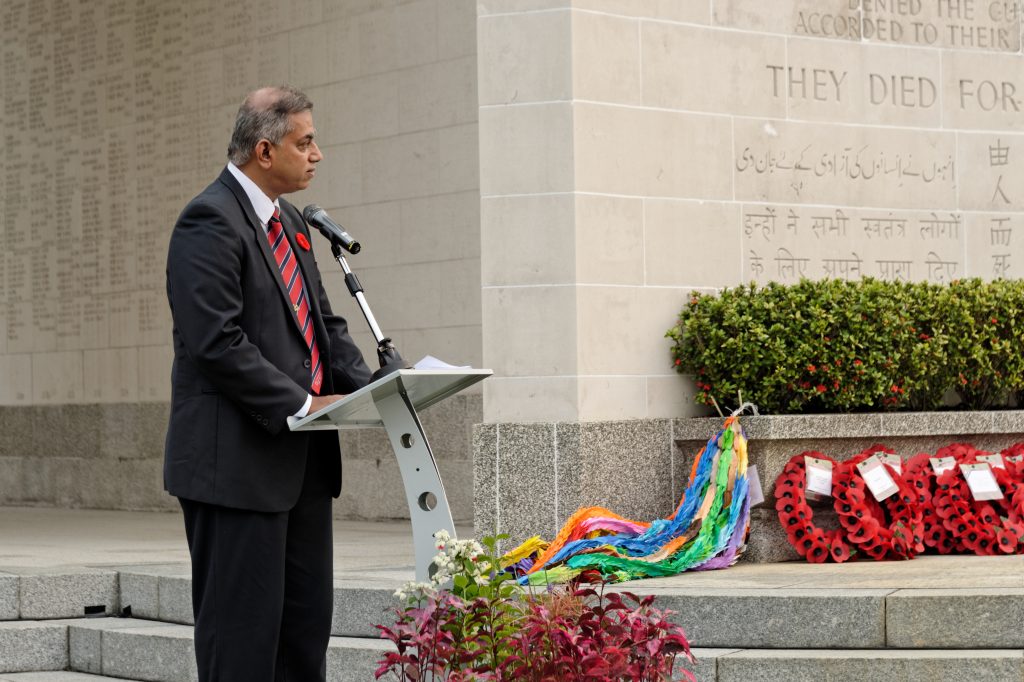 Mr Jeya Ayadurai giving a speech at the commemoration ceremony for the 70th Anniversary of the End of World War II on 12 September 2015.

With the aid of relevant government organisations, the firms poured in their own significant resources to redevelop these sites. They became award-winning, top-ranked museum experiences.

Having brought the museums up to a high standard, some of the museums were later transferred back to State agencies which now manage them directly. 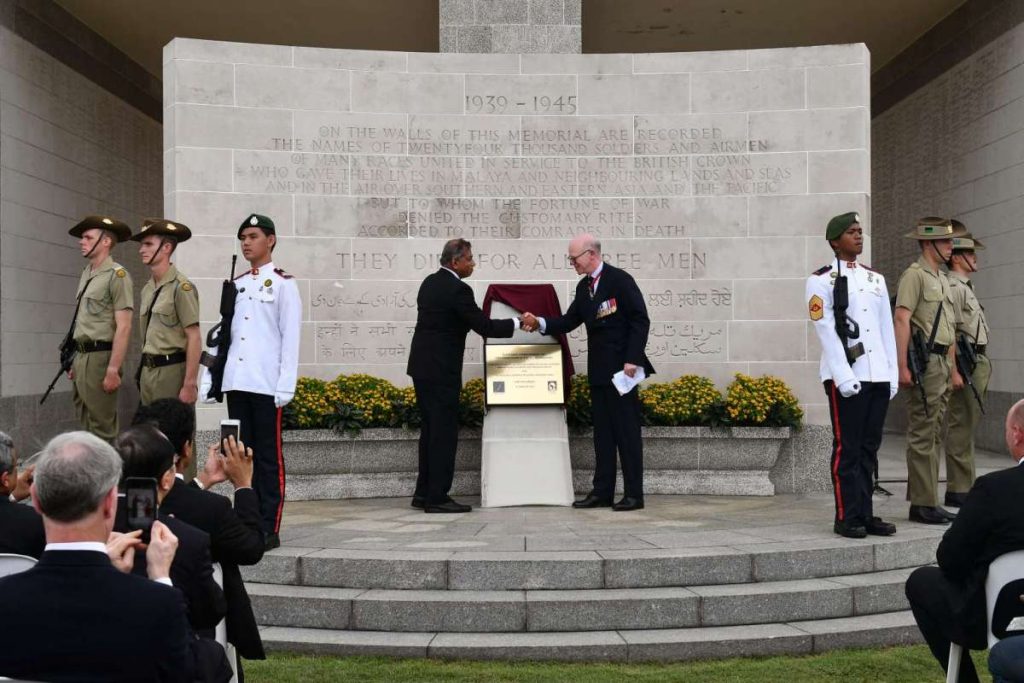 Mr Jeya Ayadurai and Commonwealth War Graves Commission Army Commissioner Lieutenant-General (Ret) Sir William Rollo unveiling a Commemorative Plaque, dedicated to the 137,000 men and women of Malaya Command, and those who contribute to the defence of Singapore today, at the commemoration ceremony for the 75th Anniversary of the Fall of Singapore, 2017. The plaque has been mounted inside the Battlebox, a former British WWII underground command centre where the decision to surrender Singapore was made on 15 February 1942.

Far from resting on his laurels, Mr Ayadurai is determined to build on these achievements. His long-term plans on the horizon include the building of museums and memorials at Kranji War Graves and other historic war sites. He also intends to pursue a campaign for the inscription of Haw Par Villa as a UNESCO World Heritage Site.

The MBE will be conferred on Mr Ayadurai in a ceremony officiated by the Queen’s representative, the British High Commissioner, HE Kara Owen. The ceremony will take place at Eden Hall, a historically significant black-and-white bungalow in Nassim Road. The date of the ceremony will be announced at a later time.