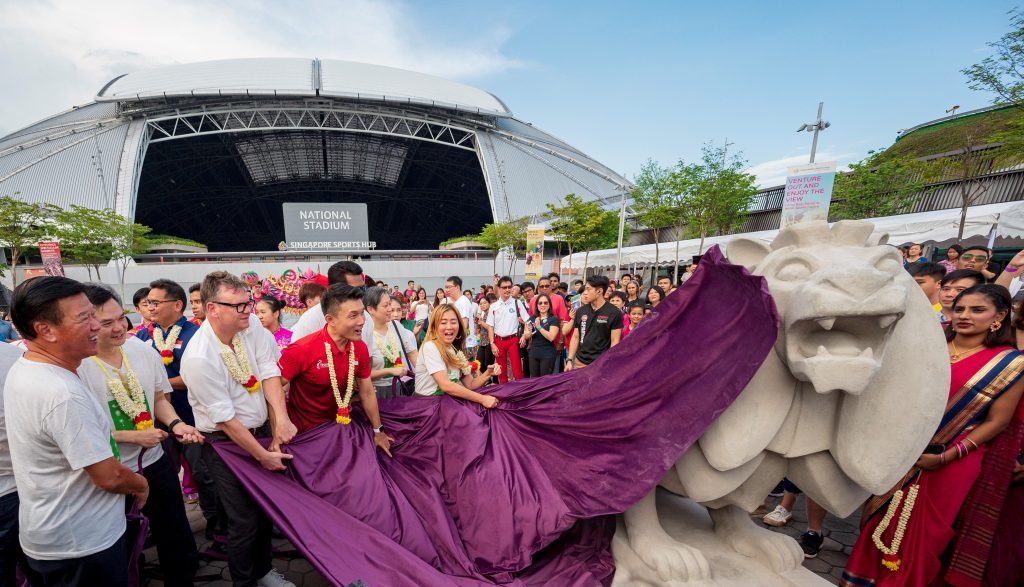 The trail became operational on May 12 with the unveiling of the Merdeka Lions by Guest-of-Honour Baey Yam Keng, Senior Parliamentary Secretary of the Ministry of Culture, Community and Youth, and the Ministry of Transport.

Mr Baey was joined by 11 community groups for a guided tour of the trail, where they were taken on a journey of Kallang’s landmarks and the area’s vibrant history.

Mr Baey said: “There is a treasure trove of stories at Kallang.  This was where many of our nation’s sporting memories were forged, and is also home to Singapore’s first civil international airport. I am heartened by this Kallang Story project, which documents some interesting elements of our heritage in the year of Singapore’s Bicentennial.  I encourage everyone to come explore the area with family and friends, relive old memories, and reflect on our Singapore Story.”

The new three-kilometre educational walking trail tells the story of Kallang through 18 heritage markers, artefacts, architecture and new artworks sited around Singapore Sports Hub. These artworks are commissioned by Singapore Sports Hub to celebrate Kallang’s heritage and local talents. The artworks will be rolled out in phases. 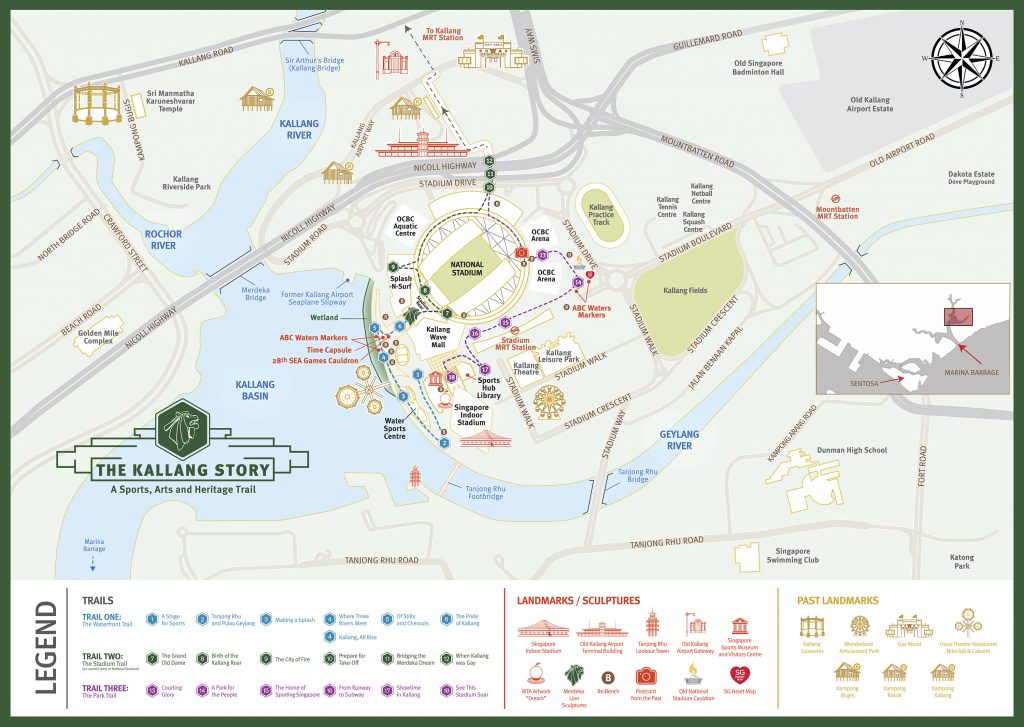 This walking trail is a community project supported by the National Heritage Board (NHB) in partnership with Sport Singapore and Republic Polytechnic. The launch is part of the Singapore Bicentennial commemoration 2019.

Mr Bryn Jones, Chairman of Singapore Sports Hub, said: “Singapore Sports Hub sits on an important historical site not just in relation to its sporting history and achievements. To peel back the layers within the site, there are many prominent landmarks which were unknown to many visitors. We hope that with this public trail, more people and families can discover this facet of Singapore’s sports, arts and heritage scenes.

Mr Lim Teck Yin, CEO of SportSG, said: “The story of Kallang is more than a backdrop to many significant moments in our sporting history.  It tells stories of generations of Singaporeans coming together to achieve extraordinary feats.  These shared memories and experiences continue to define the people we are today, pride in excellence and a vision for our future.”

HIGHLIGHTS OF THE TRAIL

Members of the public can explore the 18 markers as one whole, or in three separate smaller walking trails – The Waterfront Trail, The Stadium Trail and The Park Trail.

Each trail tells the Kallang story by highlighting prominent landmarks in the area, both past and present.

The Waterfront Trail faces the Kallang Basin, a body of water with a rich history going back at least 400 years and reveals the riverine communities who once called this area home, the traditional industries that contributed lasting place names, and the legacy of water sports.

The Stadium Trail explores the grounds of the National Stadium and covers major architectural icons which played key roles in sports, politics, energy, aviation and entertainment in Singapore. 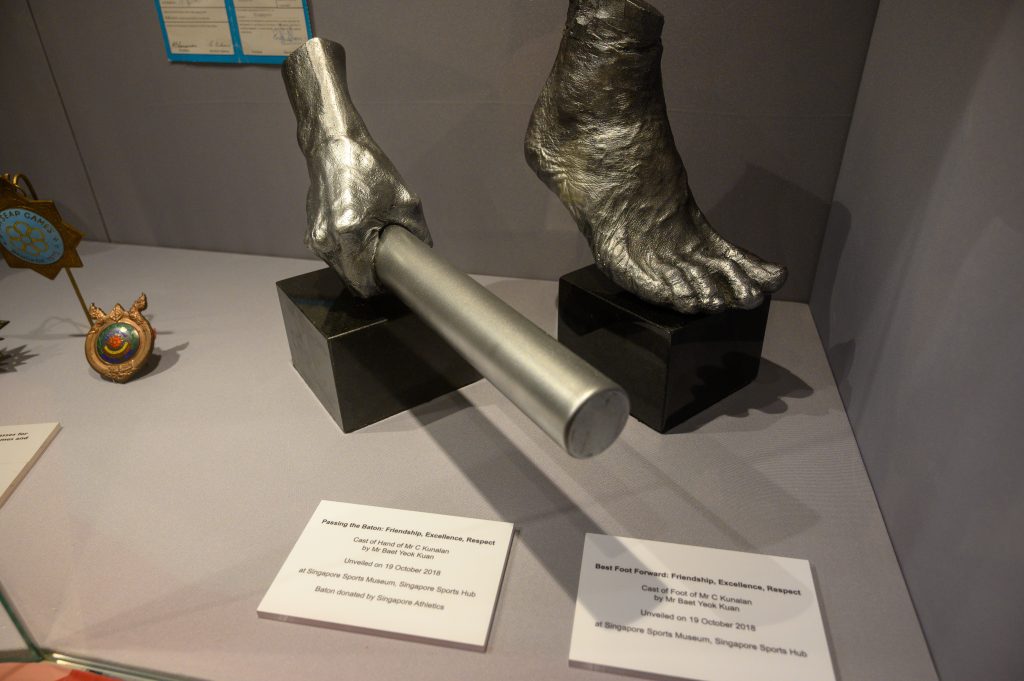 The Park Trail ventures into the former grounds of Kallang Park, journeys through memories of the old Wonderland Amusement Park and ending in front of the Singapore Indoor Stadium.

The Merdeka Lions now sited at Stadium Roar, facing the Kallang Basin, are replicas of the original artefacts that were initially commissioned by the Public Works Department (renamed ‘CPD Corporation’) as part of the Merdeka Bridge that was built in 1955. With the widening of Nicoll Highway, the sculptures were then moved to Kallang Park, before being shifted to The SAFTI Military Institute.

Members of the public can look forward to spotting 14 uniquely designed repurposed benches made from the timber seats in the former National Stadium. The installation of the 14 benches has enlivened Sports Hub’s public spaces to build community interactions and create shared memories. This underscored the intent of this “Re:Bench” Community Project, a collaboration between Singapore Sports Hub and the Urban Redevelopment Authority. 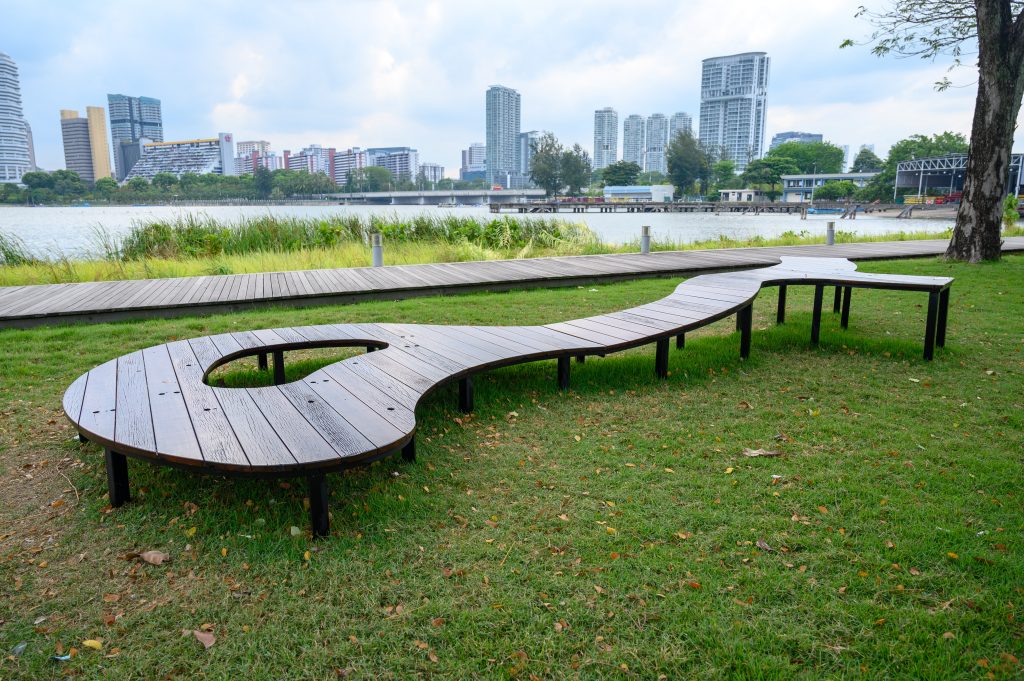 Visitors can pick up self-guided tour maps of The Kallang Story: A Sports, Arts and Heritage Trail at the Sports Hub’s Visitors Centre at OCBC Square.

Singapore World Spirits Competition to debut in June
One: Enter The Dragon: Shinya Aoki stares down Christian Lee
To Top