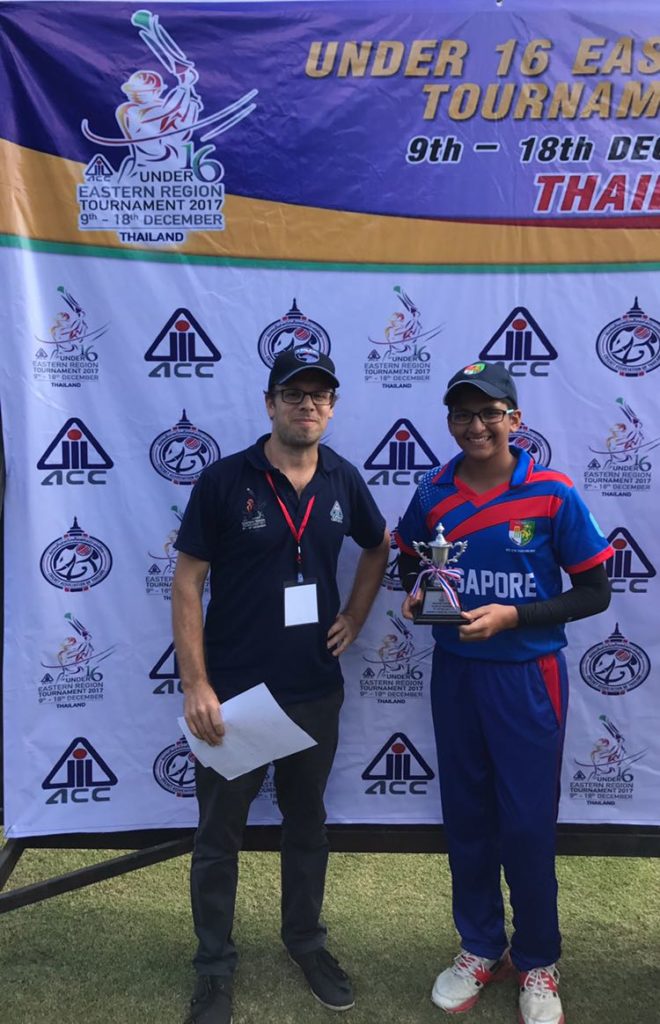 Singapore’s Under-16 cricketers placed themselves at the top of Group B following their seven-wicket win over Bhutan U-16 on December 12 in the Asian Cricket Council U-16 Eastern Region tournament in Chiang Mai, Thailand.

They now have four points, having also beaten Malaysia U-16 by 29 runs in their tournament opener. Malaysia U-16 and China U-16 lie second and third respectively with two points each.

At the Royal Chiang Mai Golf Club ground, Singapore U-16 decided to field after winning the toss, and restricted Bhutan to 66-9 in 35 overs.

Only Bhutan U-16’s Thongdrel Rabgyal (15 not out from 69 balls) reached double figures as all the eight bowlers that Singapore U-16 captain Aman Desai employed bowled a tight line and length.

Leg-spinner Aryan Berry (photo), the man of the match, did the most damage, claiming 4-15 from seven overs. Medium-pacer Pranav Sudarshan also had 2-7 from six overs. The most economical figures were produced by Ishaan Sawney, 5-3-3-0.

For the second match in a row, opener Aman got out cheaply, caught off the first ball he faced for a duck. The other opener, Sai Harsha Venugopal, then got run out for eight, leaving Singapore U-16s on 20-2 after 3.4 overs.

“It was a straightforward win,” said Singapore U-16s coach Chetan Suryawanshi. “Our bowlers really bowled well, especially Aryan and Pranav. Then Ishaan and Pramesh batted really well to carry the innings through.”

After a day’s rest, Singapore’s U-16s play China U-16s in their final Group B match on December 14.

Other scores on December 12: