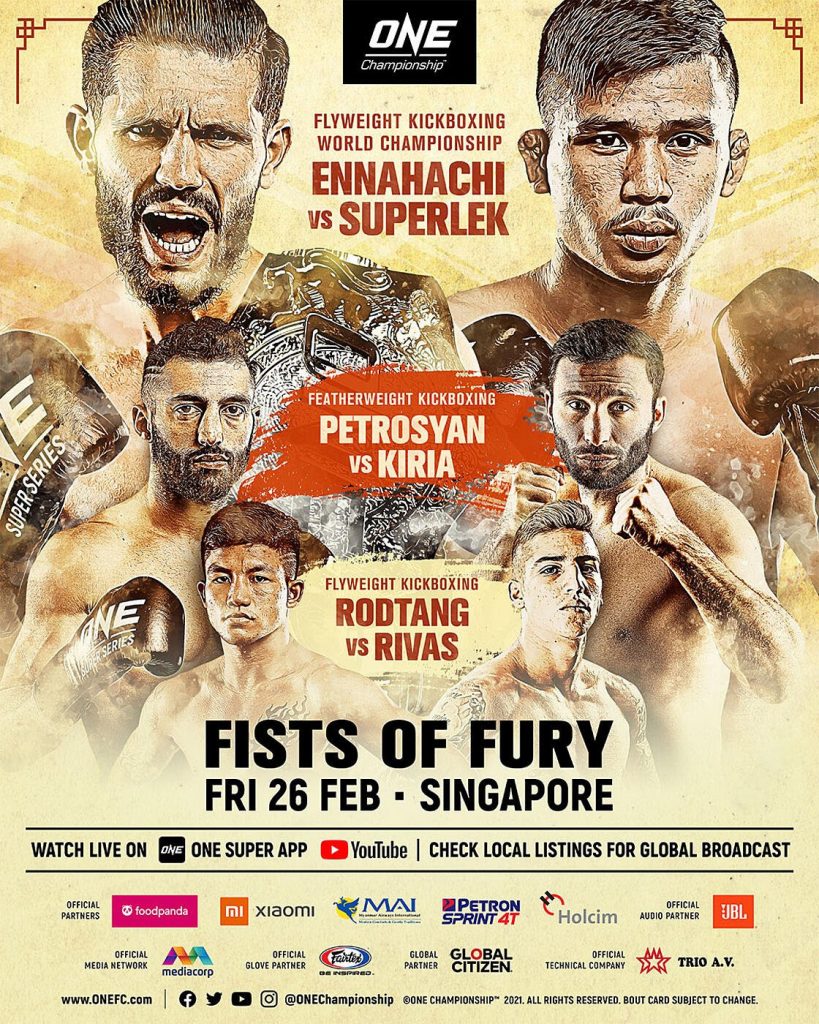 The largest global sports media property in Asian history, ONE Championship™ (ONE), has announced the full card for ONE: FISTS OF FURY, which will broadcast on Friday, 26 February, live from the Singapore Indoor Stadium.

This event continues ONE Championship’s partnership with the Singapore government to pilot the return of live international sports productions. Tickets for ONE: FISTS OF FURY are on sale to the general public  on Ticketmaster.sg. Patrons who purchase tickets will receive a limited-edition ONE Chinese New Year bundle, including a “Year of the Ox” T-shirt, a red packet set and more while supplies last.

The card will feature the following bouts:
In the main event, reigning ONE Flyweight Kickboxing World Champion Ilias Ennahachi defends his World Title against #2-ranked Superlek “The Kicking Machine” Kiatmoo9.
In the co-main event, the legendary Giorgio “The Doctor” Petrosyan returns to action in a rematch against Kickboxing World Champion Davit Kiria.
Reigning ONE Flyweight Muay Thai World Champion Rodtang “The Iron Man” Jitmuangnon steps into a new arena when he faces Alejandro “El Puma” Rivas in his ONE kickboxing debut.
#3-ranked bantamweight kickboxing contender Hiroki Akimoto locks horns with #4-ranked “Muay Thai Boy” Zhang Chenglong in a rematch of their closely contested October bout.
Phenoms collide in a strawweight Muay Thai contest, as Thailand’s Wondergirl Fairtex enters the Circle to do battle with Filipino-American striker Jackielou Buntan.
Last but not least is the highly anticipated ONE debut of Victoria “The Prodigy” Lee, who takes on Sunisa “Thunderstorm” Srisen in an atomweight mixed martial arts contest.

ONE: FISTS OF FURY II is headlined by a pair of heavyweight collisions. In the main event, Iranian superstar Amir Aliakbari takes on “Mighty Warrior” Kang Ji Won, while Anatoly “Spartak” Malykhin squares off with Alexandre “Bebezao” Machado in the co-main event. 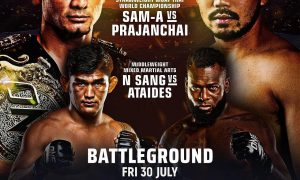 ONE Championship returns with ONE: BATTLEGROUND in Singapore