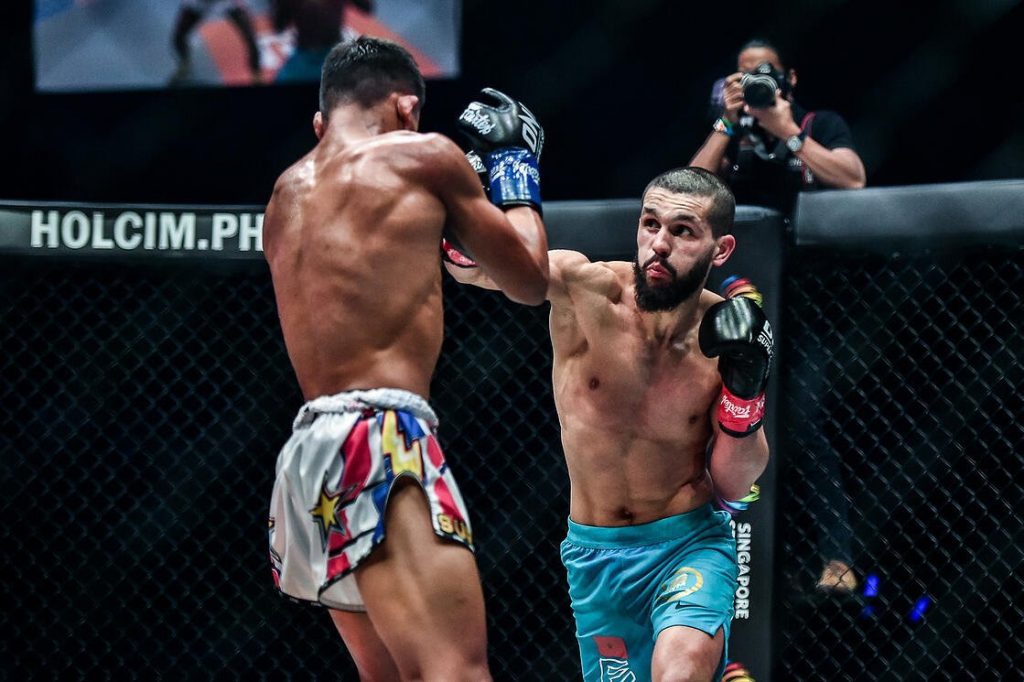 In the main event of the evening, reigning ONE Flyweight Kickboxing World Champion Ilias Ennahachi retained his World Title with a victory over #2-ranked contender “The Kicking Machine” Superlek Kiatmoo9.

Ennahachi proved enigmatic in the first round, stifling Superlek with his movement and pinpoint counters. The Thai fighter appeared flat-footed and a step behind Ennahachi the entire frame, as the defending champion forced him to retreat in every exchange.

Superlek, a multiple-time Muay Thai World Champion, did better with his kicks as the fight progressed. But Ennahachi was simply the better man on this night, as he swarmed forward with confidence, staving off his Thai counterpart’s best offense. After five hard-fought rounds, all three judges scored the bout in favor of Ennahachi.

Watch the Ennahachi vs. Superlek Kiatmoo9 fight here:
https://www.onefc.com/news/ennahachi-beats-superlek-to-retain-belt-calls-out-rodtang-dj/
ONE Featherweight Kickboxing World Grand Prix Champion and current #1-ranked featherweight kickboxer Giorgio “The Doctor” Petrosyan turned in another virtuoso performance, edging out former foe Davit Kiria after three rounds of action. Petrosyan once again showcased his precision striking, as he attacked Kiria with diverse punching combinations and a thudding left kick to the body. As Petrosyan grew more comfortable, he began to time Kiria with sharp counters. Kiria put forth a valiant effort in trying to throw Petrosyan off his game, but the latter stuck with it and clinched the clear-cut unanimous decision victory.Watch Giorgio Petrosyan vs. Davit Kiria here:
https://www.onefc.com/news/petrosyan-submits-another-flawless-performance-to-defeat-kiria/
Reigning ONE Flyweight Muay Thai World Champion Rodtang “The Iron Man” Jitmuangnon made a successful ONE Super Series kickboxing debut, turning back “Samingpri” Tagir Khalilov after three close rounds. The Thai star solidified his #1 contender spot in the flyweight kickboxing division with the hard-earned split decision, as he showcased his trademark relentlessness against a game opponent. While Rodtang applied the pressure, Khalilov tried his best to stand his ground and fire back, landing a handful of clean shots himself. In the final round, Rodtang smothered Khalilov with his complete arsenal of punches, forcing “Samingpri” to go on the defensive.Watch Rodtang Jitmuangnon vs. Tagir Khalilov here:
https://www.onefc.com/news/rodtang-nabs-split-decision-over-khalilov-in-oss-kickboxing-debut/In a rematch of their October clash, #3-ranked kickboxing contender Hiroki Akimoto scored his second straight victory over #4-ranked contender “Muay Thai Boy” Zhang Chenglong after an intense three-round affair. Akimoto got off to a fast start, pushing the pace with his powerful striking combinations, as he ripped punches to the head and body. Zhang turned up the aggression in the second round, countering with urgency as the fight progressed. Akimoto, however, stuck to his game plan and continued to land the more accurate strikes in the final frame. In the end, all three judges scored the bout in favor of Akimoto to win by unanimous decision. 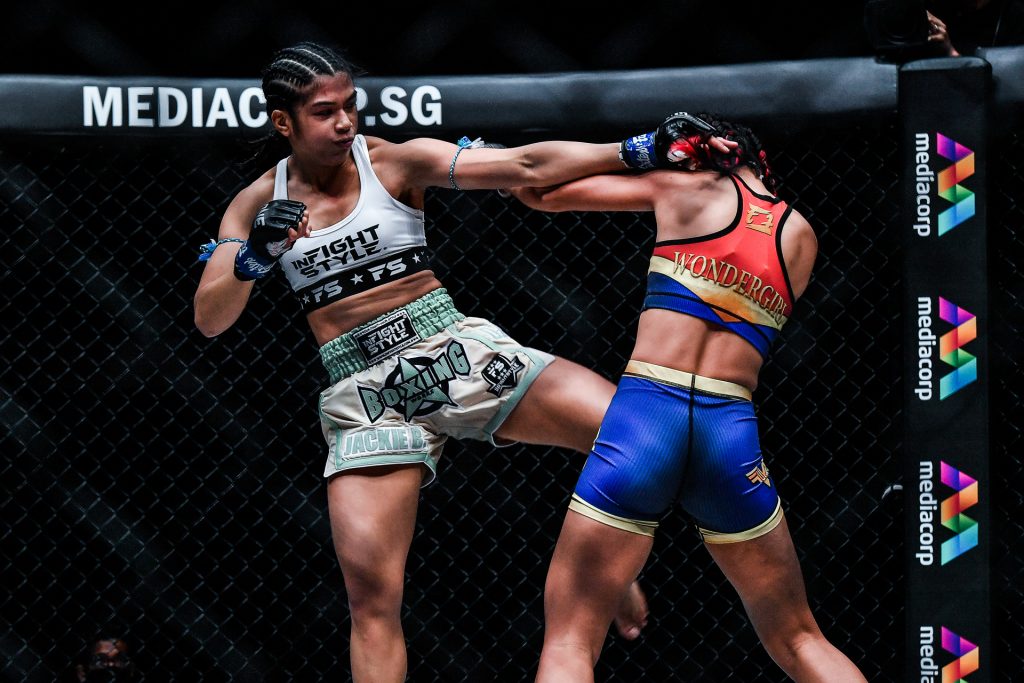 Filipino-American striker Jackie Buntan impressed in her ONE Super Series debut, upsetting rising Thai star Wondergirl Fairtex in a near-flawless performance. Buntan showcased her speed and technique, employing a fast-paced attack with high volume. In the first round, a left hook dropped Wondergirl, sending the Thai fighter face-first into the canvas. Buntan continued to tag Wondergirl repeatedly with accurate boxing combinations, digging into the midsection to slow her opponent’s pace as the bout wore on. In the end, Buntan’s overall dominance earned her a unanimous decision victory. 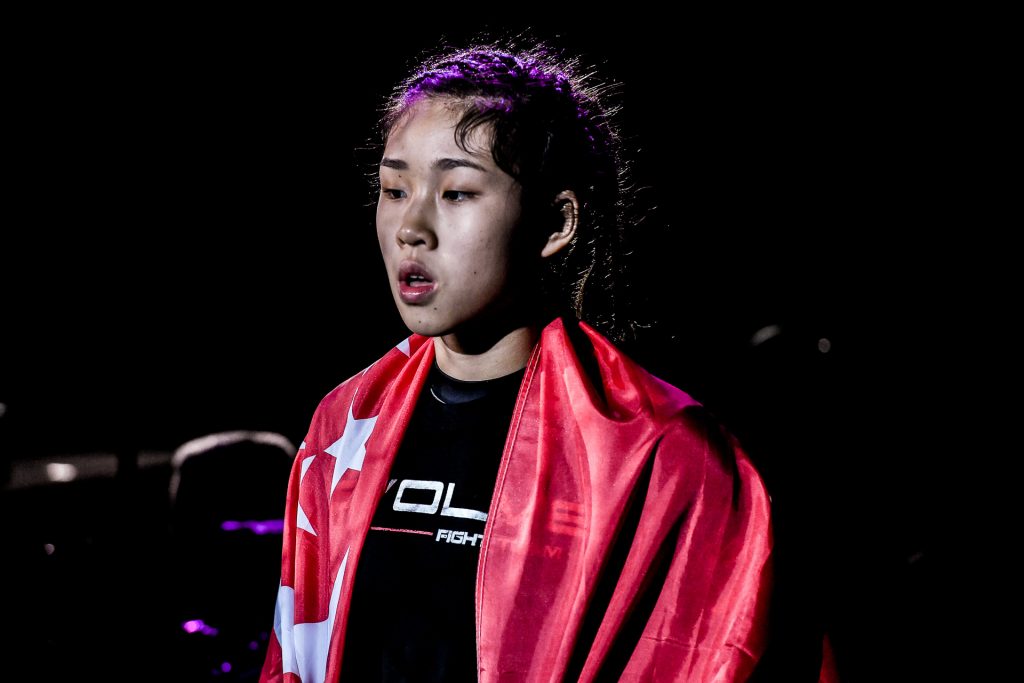 Highly regarded 16-year-old prospect Victoria “The Prodigy” Lee (above) made a successful professional mixed martial arts debut, dominating Sunisa “Thunderstorm” Srisen en route to a second-round victory. Lee came out aggressively, putting the pressure on Srisen early in the first frame. It didn’t take long before “The Prodigy” took matters to the ground and swiftly transitioned to the back, where she fished for a rear-naked choke. Srisen just barely survived the round, but after making some key adjustments, Lee took the Thai down to the mat again in the second stanza. This time, she secured the fight-ending submission to force the tap.

Next, ONE Championship returns with ONE: FISTS OF FURY II, a previously recorded event scheduled for broadcast on Friday, 5 March. In the main event, Iranian superstar and Greco-Roman Wrestling World Champion Amir Aliakbari makes his highly anticipated ONE Championship debut against Korean crusher Kang Ji Won, who is coming off a huge knockout win. And in the co-main event, Brazilian Jiu-Jitsu ace Alexandre Machado takes on undefeated Russian wrestler Anatoly Malykhin. For more information, please visit the official ONE: FISTS OF FURY II Event Page.

Official Results for ONE: FISTS OF FURY

ONE: FISTS OF FURY MMA fights on February 26 in Singapore
Stars dazzle at The Apprentice: ONE Championship Edition premiere
To Top