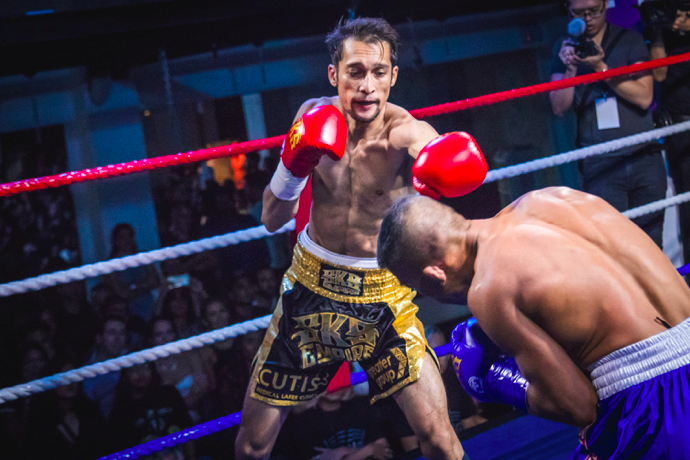 While many expected the title fight to be a long-drawn battle over the full ten rounds, it proved to be the complete opposite with Farouk ending the contest simply after just 1 minute and 2 seconds, after a strong body shot left his experienced Indonesian opponent helpless on the floor.

After earning the biggest win of his career and taking his professional boxing record to 7-0, the 30-year-old said: “I am very happy with this win, because not only am I the WBC Asia Continental Super Featherweight Champion, but more importantly I was able to put into practice exactly what we did during training and make it happen exactly the way we visualized it, on top of taking out a quality opponent in the first round. This is a huge step forward for me, but it is still early on in my career. This win will boost my confidence and I look forward to taking another step up in opposition soon and win more belts as we move up the world rankings.”

It was also a night to remember for Kirstie Gannaway after she earned a unanimous decision victory over Indonesia’s Febriyanti Lubis in her professional boxing debut. Gannaway put on a measured performance over all three rounds, smartly assessing every situation in both attack and defense, and proved she has what it takes to make it in the boxing ring, just like how she did in the Mixed Martial Arts cage.

On her victory and what’s ahead, Gannaway remarked: “It was an exciting night entering the professional fighting scene once again, only this time in boxing. It went great, I felt great and was happy to be there. I applied what we’ve been practising with the team and it was a successful night, not only for me but the rest of my team too!

France’s Abdelelah Karroum once again put on a clinical performance to earn his third TKO victory to make it 4-0 since his professional boxing debut earlier this year.

The 25-year-old was calm and composed throughout the contest against his Indonesian opponent Hardian Siregar, especially so in the opening round. Karroum then stepped up a gear in the second round, securing an emphatic finish with a flurry of punches that saw Siregar go down for the count.

In addition to the five professional boxing bouts, where there were also wins for comeback kid Rey Caitom Jr and France’s Medi Boufoudi, there were also five amateur boxing contests on display, all of which were title fights.

In the first bout of the evening, Raihan Ibrahim kicked off TRFC V with a bang, in his match up against Jared Hoon. It was a strong display from Ibrahim, which saw him walk away with the TRFC Men’s Amateur Lightweight title.

A dominant performance from The Ring Boxing Community’s (TRBC) Tawee Tong Yu led to a unanimous decision victory over Malaysia’s Lily Rahman, which saw her secure the TRFC Women’s Featherweight title once again after she surrendered her belt in the previous edition of TRFC.

It was what arguably the fight of the night, local boxers Velco Tan and Dhinesh Kumar went toe-to-toe over three rounds, with the former coming out on top to take the TRFC Men’s Amateur Boxing Welterweight title.

Inspired by his brother’s earlier success, Velvan Tan then put on an inspired performance in his rematch against Helal Jr. to wrestle back the TRFC Men’s Amateur Light Welterweight belt from his Egyptian opponent.

It was yet another terrific display of boxing on both the amateur and professional front at TRBC as it hosted the fifth edition of TRFC, which is sanctioned by the Singapore Amateur Boxing Association (SABA) and the World Boxing Council (WBC). There were a total of 450 attendees present at TRFC V – the largest audience to date at a TRFC event.

Mr. Ruchdi Hajjar, founder of Golden Glove Asia Promotions and TRBC, added: “This event showcased all the best values boxing have to offer – passion, performance, integrity and success – and all surrounded by a strong boxing community. Yesterday, we witnessed fantastic performances from both elite and amateur boxers from Singapore and beyond. At TRBC, we are constantly engineering and designing the future of boxing and hope to make Singapore proud and offer fans the very best that boxing has to offer.”

For more information about TRFC or any of TRBC’s events, visit www.thering.sg.