HAIKOU, HAINAN, CHINA, 18 November 2018: The Barça Experience on Hainan Island in China is now a reality after the opening ceremony was held today at Mission Hills Centerville in Haikou. 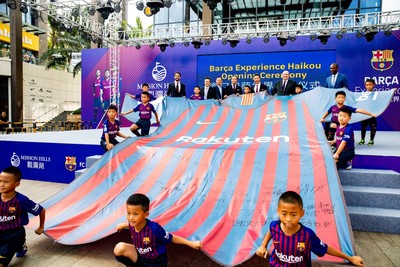 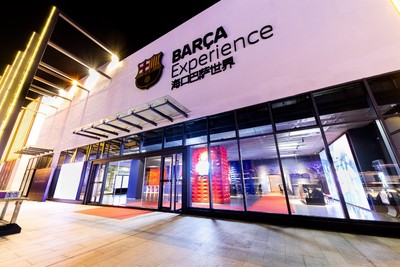 The first Barca Experience outside of Spain has been opened in Hakou, Hainan Island, China, in partnership with Mission Hills. 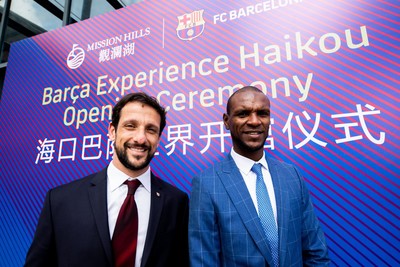 Barca Legends Juliano Belletti and Eric Abidal were in Haikou for the Opening Ceremony. 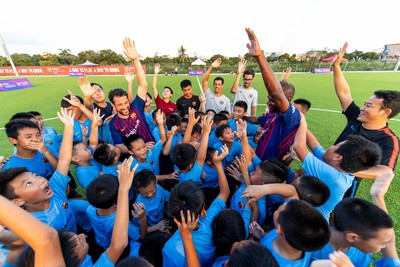 Fans visiting Hainan Province will now be able to learn more about FC Barcelona thanks to a venue that includes an interactive 4,000-square-metre museum and a large megastore, as well as a Barça Academy Pro with six pitches.

The Barça Experience Haikou Exhibition Centre - the first outside Barcelona in the Club's 119-year history - is one of the pillars of a strategic partnership between FC Barcelona and Mission Hills Group, the first joint venture in the history of the Club.

The joint venture between the world's most famous football club and the world's largest golf facility - with 22 golf courses across two locations - was announced in February 2017 with the aim of helping discover and nurture future athletic talent in China. The project includes an FC Barcelona Experience area measuring 4,000 square metres, a 900-square-metre Megastore, an area for a future restaurant, and a Barça Academy Pro that has been operating since the summer of 2017.

Dídac Lee announced that Barça is working with the intention of having the first team visit the Haikou facilities during the 2019 summer tour. The team have a pre-season trip to China and Japan scheduled, as part of the globalisation and brand expansion strategy that is part of the current mandate's Strategic Plan.

After the official opening ceremony, both parties along with local authorities visited the Barça Experience, a 4,000-square-metre facility that is the largest museum space and experience for any football club outside of its own country.

It is conceived to be interactive and offer digital experiences to the fans that visit it, and has a trophy area, a virtual reality zone that lets the fan travel to Camp Nou, large screens where videos of historic sporting moments are projected, a playing area with different activities involving taking penalties against Ter Stegen and finding historic images and much more - always staying faithful to the style of play that has made Barça a world leader in football.

The trademarks of being 'more than a club' are also present, with explanations about everything that Barça does differently to any other club in the world.

Haikou's Barça Experience project is located in a strategic area on the tropical Hainan Island with great environmental sustainability. It is not industrialised; it is a great sporting destination and a recognised tourist spot for the Chinese in the south of the country.

Visit to the Barça Academy Pro

The delegation also visited the Barça Academy Pro, at facilities located around twenty minutes from Centreville within the 22-square-kilometer Mission Hills Haikou resort. It has been a training centre since 2017. Since then, more than 1,200 children have participated in the different programmes organised with the same methodology as Barça schools, in facilities that include six training pitches with the capacity for a thousand athletes. In this period, more than 5,000 young people from Haikou city have also been trained by coaches from the Barça Academy in different campaigns to promote football in local schools.

Éric Abidal and Juliano Belletti ran a workshop with the boys and girls of the academy, taking part in an activity called '2 against 60', in which 60 children from the school faced them in a game.

"Today we open a Barça Experience centre and a store that will allow us to get closer to Barça fans in China. We know that the Chinese interest in football is growing day by day in the same way that their interest in Barça does. This centre will help football fans who come to the beautiful island of Hainan to spend some unforgettable moments in a unique place. We are sure that the more we get to know each other, the more we will love each other. All this can be seen in detail at this Barça Experience centre. We want all fans to feel part of the Barça family that consists of partners, supporters groups, fans, players and partners like Mission Hills."

"Football is the biggest sport in the world and the most popular in China. The country has about 200 million fans and more than 10 million people actively play the sport. The Barça Experience, along with our Barça Academy Pro, will inspire a new generation of football fans in China. Through our partnership, Barça and Mission Hills are supporting the Government's vision for China to have 50 million children and adults playing football by 2020 - with 20,000 training centers and 70,000 pitches across the country - and potentially to bring a future FIFA World Cup to China."