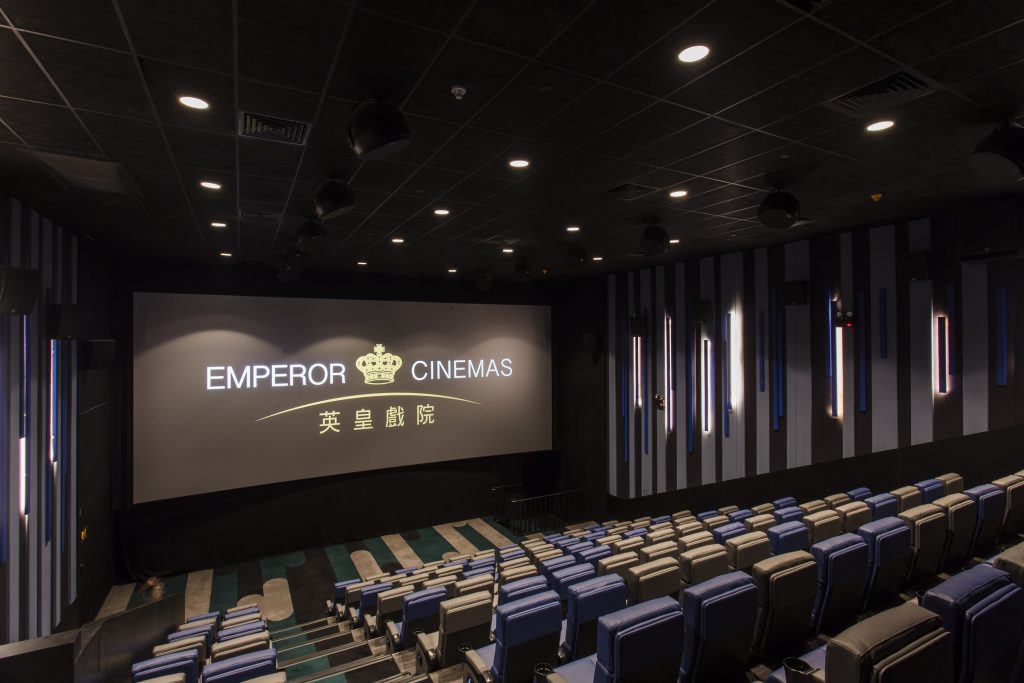 Each cinema hall has been equipped with state-of-the-art SONY 4K Laser projector system, the first of its kind in Malaysia

Alex Yeung, Executive Director of Emperor Group, said the Group is delighted to introduce Emperor Cinemas in Malaysia, especially in a strategic location like the R&F Mall which caters to both the Malaysian and Singaporean moviegoers.

“I am extremely delighted that our first South East Asia cinema has arrived in Malaysia. Over the recent years, the Group has been keen to expand its presence in the film and entertainment industry by taking a streamlined approach with its diversified business resources, enabling an enhanced viewing experience for audiences across the region,” said Alex.

Each employee is also given the important task of ensuring that each customer’s cinematic experience is delivered with the highest standards.

As Emperor Cinemas focuses on providing a wholesome experience through in-depth design features when introducing a new cinema, expect unconventional interiors when you pass through the doorway at the outlet in R&F Mall.

With the wide use of suspended geometric structures across the entire two-storey cinema, the overall design celebrates the various forms of imagination and the possibilities of creativity. 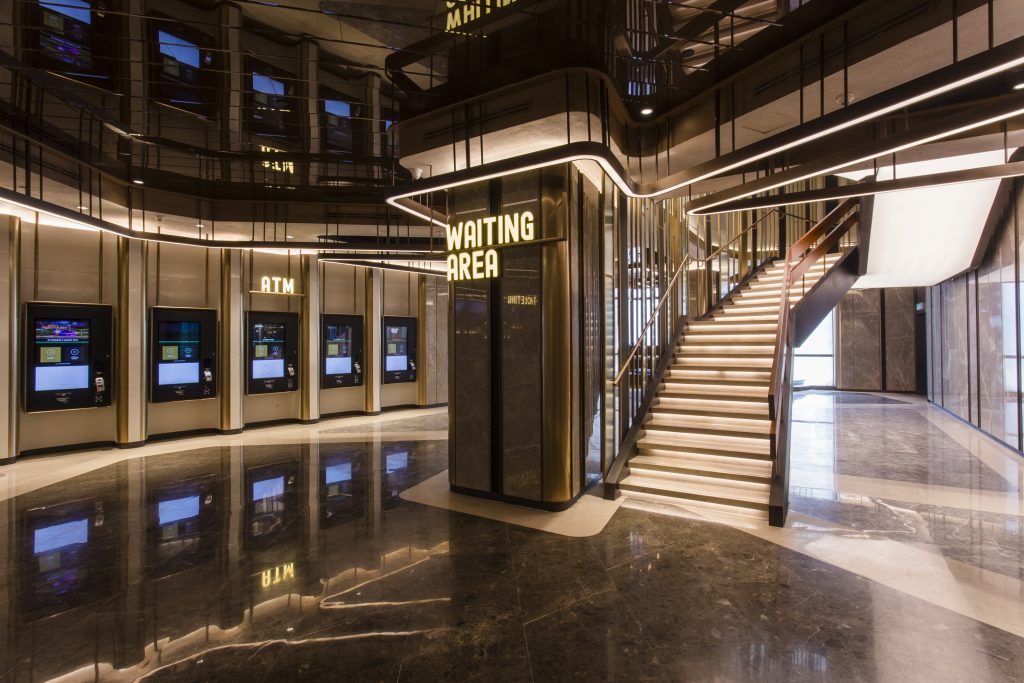 The lobby features a subtle colour palette of grey, silver and bronze, to complement the spectacular pendant light above the doorway and the suspended ceiling structures.

The staircase that glows with a flight of hidden LED lights, the black hairline stainless steel door to each screening house,
the various shades of blue fabric walls in Hall Type A and the hues of green in Hall Type B, all of which desire to lead the audience to enter another universe and embark on an adventure.

Breaking tradition of the customary popcorn and soda, Emperor Cinemas has introduced gourmet Hong Kong snacks with a high-end twist. With the passionate culinary team on board, moviegoers can indulge in a Hong Kong-styled menu and specialised drink recipes.

Emperor Cinemas invites guests to relish in the rich and buttery original egg waffles or top it with a spoonful of delectable ice cream of their choice to achieve an invigorating balance.

For a sweet indulgence or to experience a typical Hong Kong high tea, customers can request for the delicious ice-cream red bean fleecy. Similar to the local dessert cendol, this drink is made using adzuki beans, light rock sugar syrup and evaporated milk. 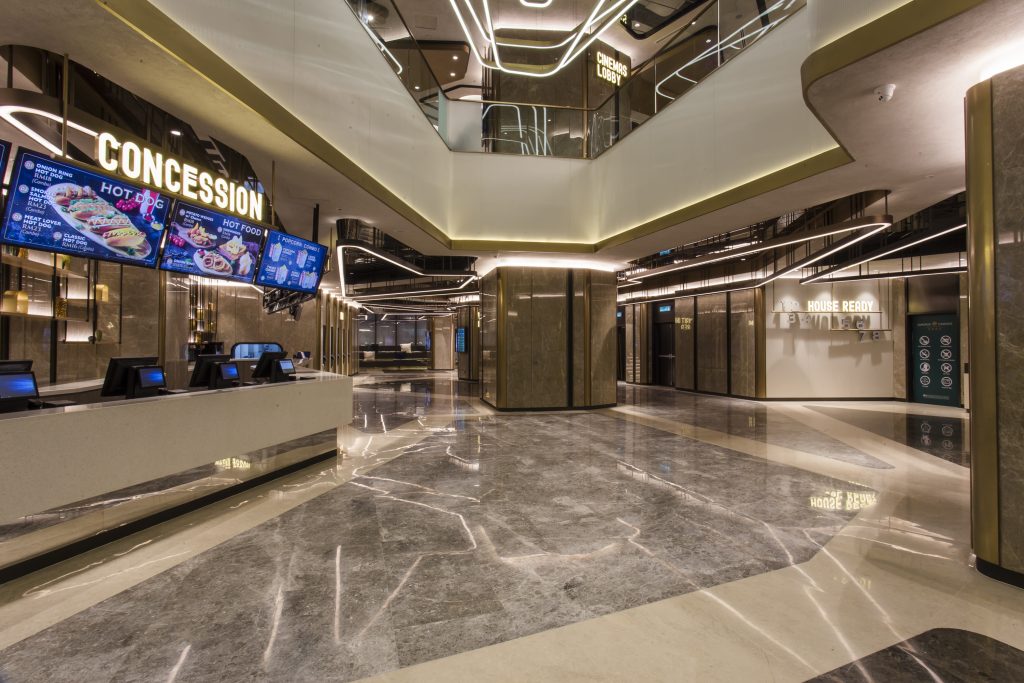 Complement the staple ice cream with the famous Cha Chaan Teng French toast to experience a palette of powerful flavours.

The menu promises to provide one of the best snacking experiences at gourmet standard.

Emperor Cinemas has a wide spread of F&B offerings over 2 levels, each serving different types of delectables. Guests can either choose to indulge in the traditional cinematic snacks of popcorn and hotdogs at the cinema concession counter on Level 1 or satiate their taste buds with local Hong Kong food at the Monkey Cafe on Level 2 of the cinema.

The café promises audiences an experience different from the traditional cinema concession counter on Level 1 and becomes a perfect place for moviegoers to hang out while waiting for a movie or to simply enjoy the gourmet standard food and beverages served there.

Other features
Tailor-made for movie connoisseurs who appreciate only the highest quality, the cineplex has 8 luxuriously-appointed cinema halls. There are 2 Dolby Atmos halls and 6 Dolby 7.1 halls with a combined seating capacity of 745. All seats come with flexible armrests.

“Featuring sofa leather seats, audiences are guaranteed to be delighted with the cinematic experience of high-end comfort and style, and they may even forget that they are sitting in a theatre,” said Vicky Wong, Director of Administration and Special Projects.

For the more dedicated movie fans, each cinema hall has been equipped with state-of-the-art technology. The SONY 4K Laser projector system, the first of its kind in Malaysia, brings advanced image quality to the screen with outstanding brightness, high contrast and superior colour performance.

“Cinemas have to constantly raise their game to provide an unmatched immersive experience in both sight and sound. We found Sony 4K Laser Projector System ticking all the right boxes for true 4K image quality,” said Vicky.

There are 5 ticketing kiosks and 2 box office counters available at the cinema. Emperor Cinemas also sells e-tickets through an online platform as well as a newly launched mobile application, where guests can manage bookings and receive the latest news all at their convenience. By booking online, customers can enjoy service fee waiver, a first in Malaysia.

Moviegoers are encouraged to join Emperor Cinemas’ VIP membership for free and enjoy a lifetime of exclusive benefits, such as receiving two complimentary tickets on your birthday month, annual 10% discount on food and drinks, exclusive invitations to member events and many other privileges.

On top of all the goodies, VIP members can accumulate tokens for all spending at the cinema and redeem exciting rewards such as free tickets or items from the concession counter.

Use the mobile app to access VIP membership programmes for e-membership cards, coupons, special reward offers and enjoy the ease of e-ticket admissions.

For truly worthwhile rewards to savour, download the Emperor Cinemas app via Play Store or Apple Store and join the VIP membership now!

Beyond the conventional cinema offerings

Emperor Cinemas has also opened its doors to the public for private screenings and parties. Situated at an ideal location between two fast-paced cities, Emperor Cinemas does not only offer the best venue for private parties, meetings and business events, but it also provides guests with the opportunity to decide the type of content they wish to project on screen during these special events.

Screenings include movies, live sports events or even e-sports competitions. Guests are also allowed to create their own themed activities such as birthday parties for kids and adults, family reunions and social gatherings .