ATLAS has announced the launch of its new cocktail menu Interbellum.

Developed by Head Bartender Jesse Vida and his team, the menu is a celebration of the Art Deco period, paying homage to classic European cocktails of the time as well as ATLAS’s home, Parkview Square, with architecture inspired by the glamorous Art Deco skyscrapers of the period.

Interbellum, the period between the two World Wars, was one of great transition and change. From design and art to music, fashion, food and drink, the period marked the birth of the Art Deco movement. People of the time began to experience a morally-enlightened, technologically-fuelled era of social and cultural change.

Celebrating this ground-breaking period, Interbellum invites guests on a journey through the Art Deco movement to explore some of its leading cultural moments and celebrations. The menu is divided into five chapters, each showcasing dynamic cocktails inspired by the era, with many of the drinks featuring gin and Champagne, the twin pillars of ATLAS’ beverage programme.

“For this menu, it was important for us to stay close to the philosophy and vision of ATLAS, and take inspiration from classic cocktails of the Art Deco period,” says Jesse Vida, Head Bartender at ATLAS. “Using fresh and house-made ingredients, each drink has been inspired by this most seductive of eras, while showcasing a blend of traditional European influences with an updated touch. We look forward to welcoming guests to journey with us through the stories.

Signature drinks such as the ATLAS G&T (S$19), Gin Tonica (S$23) and Summer in Paris (S$12) remain on the menu. The addition of the French 75 (S$25) offers a modern take on the classic, the perfect drink for gin and Champagne lovers. The bright and citrus-forward cocktail can also be elevated with an upgrade to any Champagne on the ATLAS Drinking Menu.

Chapter One: International Exhibition of Modern Decorative and Industrial Arts

The first chapter of the menu highlights the International Exhibition of Modern Decorative and Industrial Arts, a world fair held in Paris in 1925. The exhibition was a celebration of the modern trends and talents, showcasing items ranging from furniture and porcelain to jewellery and textiles. People came from all around the world to visit, resulting in new exposure to craftmanship, and the birth of Art Deco as a global phenomenon.

Inspired by this period of luxury, glamour and exuberance, Art & Influence (S$22) is a delicate low ABV cocktail infused with refreshing ingredients including jasmine, lemon and honey. Under this section remains the signature ATLAS Martini (S$25) made with London dry gin, ambrato vermouth orange bitters and champagne vinegar.

The Discovery of King Tutankhamun in 1922 made the Pharaoh a star overnight and sparked a global phenomenon, known as “Tut-Mania”. The tomb was discovered at the start of the roaring twenties and brought a renewed interested in all things ancient Egypt. Popular culture began to reflect people’s fascination with King Tut, which was seen in the fashion of the 1920s and 30s, and later in decorative arts and even architecture.

This chapter celebrates the influence King Tut had on the Art Deco era and raises a toast to the young Pharaoh himself with a highball aptly named, The Boy King (S$27). This sharp and dry tipple is infused with Oloroso sherry, sweet vermouth, aperol, apple cider syrup, black lemon bitters and topped with Champagne.

Chapter Three: The Age of Airships

In 1936, the LZ 129 Hindenburg began transporting passengers between Frankfurt and the New World, cutting travel time in half against the fastest passenger liners of the time. Despite its initial success and progressive plans, the Hindenburg met its fiery fate in New Jersey, America on 6 May 1937, and brought the Zeppelin’s use as a form of passenger transport to an end. Despite the tragedy,  the legendary Zeppelin has lived on in popular culture and well into the modern era.

Mr. Schulze’s Sour (S$26) is a tribute to Mr. Max Schulze, the man behind the beverage programme for the Hindenburg. This full-bodied, citrus-driven cocktail is made with dry gin, absinthe, lemon, egg white and bloody shiraz before being served in a tall coupe and garnished with orange zest for an added citrus kick.

Brave New World by Aldous Huxley was published in 1932 and is a futuristic literary masterpiece about genetically-modified citizens living in a perceived utopian society. A reflection of Huxley’s growing concern with the social consequences wrought upon British society by World War One, the book highlights the changes in attitude in society during A Time for Bold Ideas. Huxley believed that by moving towards a more modern and technologically advanced world, humans were giving up their freedom and individuality. 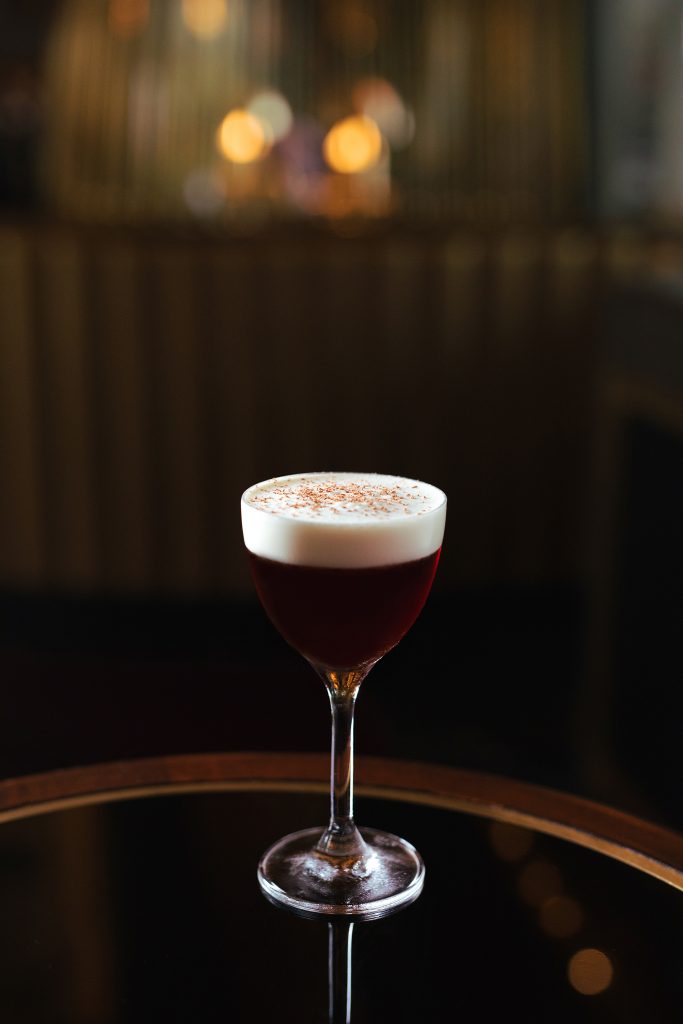 R.E.M. (S$25) is inspired by the Brandy Alexander cocktail, and the idea of “sleep learning”, where it was suggested that learning during R.E.M. was possible as the brain’s electrical activity was similar to that during waking hours. The silky whipped cream on top covers a base of cognac, mixed with dashes of banana liqueur, raspberry liqueur and aromatic bitters.

A significant portion of the Art Deco period was known as The Jazz Age. While the United States was in the grips of Prohibition, across the pond jazz music in Paris was beginning to find its voice and was becoming widely acknowledged and respected as an art form. Jazz first took hold in France during WWI, as African-American soldiers marched through the streets carrying melodies with them. As the war ended, many stayed on in Paris, and soon French jazz developed a life of its own.

Soldier’s Song (S$16) pays tribute to the many African-American soldiers who were exposed to the culture of Europe through the Second World War, and later returned to pursue a musical career and escape the racial prejudice of the United States at the time. This temperance libation consists of non-alcoholic spirit, lemon and almond syrup, shaken with a bay leaf before being served with shaved almond.

Celebration of an Era

The cultural, artistic and human influence of the Art Deco period on the Western world since the end of the 1930s is undeniable. As people became more open-minded and expressive with art and music, softening more conservative morals, they celebrated more and drank better.

ATLAS graces the ground floor of one of Singapore’s most iconic buildings, Parkview Square, in the history-rich Bugis neighbourhood. A celebration of the grand Art Deco lobbies of Europe and the era’s rich culinary and beverage traditions, ATLAS offers a carefully curated drinking and dining experience all-day and deep into the night.

The bar is helmed by Jesse Vida (of globally acclaimed Dead Rabbit and Blacktail fame), delivering an inspired interpretation of elegant and balanced classic cocktails. The ATLAS Gin Collection is housed in an iconic 8-metre tall Gin Tower, consisting of 1,300 bottles from around the world. Below the Gin Tower, a rose gold Champagne Room holds the ATLAS Champagne Collection which carries a 270-label selection of some of the world’s most prestigious vintages and respected houses.

ATLAS’ food menus offer inspired and refined European dishes made with a passion for thoughtful presentation and the freshest of ingredients. Ranging from morning pastries to late night bites, from executive lunches to a la carte dinner, guests can enjoy all-day dining for any occasion. During mid-afternoon, a delicately indulgent Afternoon Tea set is served, showcasing a selection of handcrafted savoury and sweet nibbles alongside an expertly curated selection of teas and champagnes.

Since its official opening in March 2017, ATLAS has become one of the most acclaimed bars in Asia, and indeed the world. Accolades include being named Best International Cocktail Bar and World’s Best Spirits Selection at Tales of the Cocktail 2019,  Bar of the Year (Asia) by Drink Magazine in 2017 and Best Specialist Concept at the Singapore Bar Awards 2018. Following its debut at No.12 on Asia’s 50 Best Bars 2017, ATLAS has most recently been awarded the No. 5 spot in 2019. At the World’s 50 Best Bar Awards in 2018, ATLAS rose to occupy the No. 8 position after debuting in 2017 as the highest new entry at No. 15.

ATLAS is owned by Parkview Square’s developers, the Hwang family, who have created a warm, welcoming destination with a real sense of occasion, delivering elegance and excellence … without pretence.