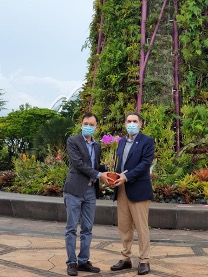 The beautiful Guaria Morada (Guarianthe skinneri) is a species of orchid that is native to Costa Rica. It is the Central American country’s national flower.

Now the orchid can be spotted at Singapore’s Gardens By The Bay.

Costa Rica’s Lankester Botanical Gardens, located in Cartago province, donated 233 different types of Costa Rica orchids, including Guaria Morada, to Gardens by the Bay in an initiative that features a growing friendship between the two institutions.

The plants arrived in Singapore on April 27, 2021, after a week-long trip and are thriving in the new climatic conditions.

He said that thousands of people will now be able to appreciate one of Costa Rica’s national symbols and learn more about the orchid species.

He added that Costa Rica has 1,600 species of native orchids and the Lankester Botanical Gardens has 15,000 orchid plants, mostly for research. 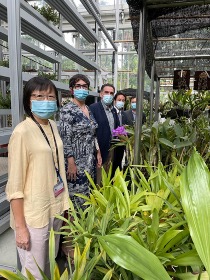 Costa Rica Embassy staff with the orchids at Gardens by the Bay. PHOTO: COSTA RICA EMBASSY

Costa Rica is celebrating 200 years of independence in 2021.

Ambassador Victor Hugo Rojas expressed his sincere appreciation to Gardens by the Bay for accommodating the orchids and displaying the rare species to the public in Singapore.